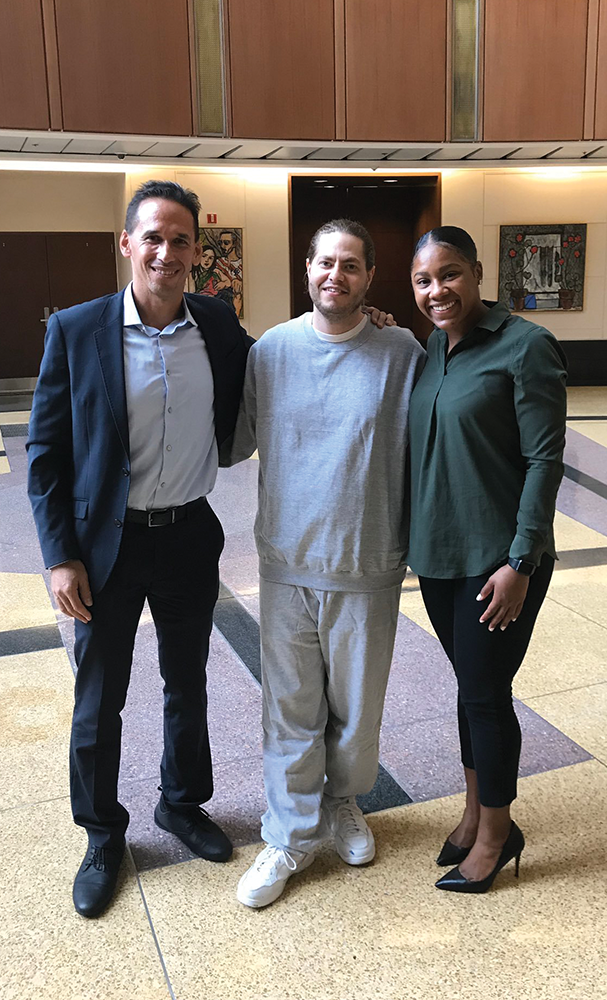 Zack Johnson, a formerly incarcerated student in the Georgetown Prison Scholars Program, was freed Sept. 30 after serving two and a half years in the Washington, D.C. Correctional Treatment Facility.

At a hearing to retry his case on Monday, Johnson faced a possible four- to eight-year sentence. Professor Marc Howard, the founder of the Prison Scholars Program, and Aliyah Graves-Brown, coordinator for Georgetown University’s Prisons and Justice Initiative Program, which develops programming on mass incarceration and criminal justice reform, testified at the hearing.

The judge sentenced Johnson to time served, commuting his sentence to equal the time he had already spent in jail, leading to his immediate release, according to a Facebook post from Howard announcing the decision.

Howard launched the Prison Scholars Program, which provides both credit and noncredit courses for incarcerated individuals, at the D.C. Jail in January 2018 as a part of the Prisons and Justice Initiative.

The Prisons Scholars Program has given Johnson the opportunity to pursue his dream of receiving a bachelor’s degree from Georgetown, according to Johnson.

“Georgetown’s prison and justice initiative allowed me to finally unite my real self with my ideal self,” Johnson wrote in an email to The Hoya. “With this clarity of mind I realized my dreams were not impossible and quickly devoted myself at being the best student I could be. Because of PJI I’m now truly living my dream.”

Johnson was a strong student all throughout high school, he said. However, right after Johnson graduated high school, his father suffered a heart attack, which necessitated a quadruple bypass surgery and left him unable to continue working. The medical bills and loss of his father’s income inflicted a heavy financial burden on Johnson’s family, which made Johnson unable to attend college, according to Johnson.

Johnson’s struggle with prematurely ending his education sent him on a troubled path that led to his incarceration, according to Johnson.

“For so long I have been told how much potential I have,” Johnson wrote in an email to The Hoya. “Instead I drifted down the wrong path creating a real self that was in constant contention with my ideal self. This disconnect only caused more depression and despair leading me deeper and further down the wrong path.”

The “Prisons and Punishment” course is offered to both prisoners and Georgetown students. Johnson’s former classmate Haley Wierzbicki (COL ’21) said that she gained a personal perspective from learning alongside Johnson and hearing about his life experience.

“We need to humanize these people that are being subjected to the terrible position that is our criminal justice system,” Wierzbicki said. “We need to use our privilege of being Georgetown students to humanize them, and to prove to the world that taking a class in prison is the same experience you’d have on campus, but you’re learning more from a diverse set of life experiences.”

Johnson, who was taking Howard’s “Prisons and Punishment” class while he was incarcerated, will now join the class held on Georgetown’s campus and will also enroll in a personal finance course through the university.

While taking the Georgetown course during his incarceration, Johnson pursued a Communications degree through the Prisons Studies Project with Ashland University, which offers postsecondary education in correctional facilities, according to the program website.

Johnson’s avid participation in two academic programs speaks to his strong desire to learn, according to Graves-Brown, who met Johnson while visiting the prison several times every week to ensure the smooth operation of the program as coordinator.

“He was in both of our programs simultaneously, which speaks to his intellect and his ability to handle a lot of work,” Graves-Brown said in an interview with The Hoya. “I’m grateful that I was able to cross paths with him and continue to be a part of his journey.”

Johnson’s journey exemplifies how incarcerated individuals can follow a new path, according to Howard.

“The biggest takeaway of all of this is that people who are incarcerated are human beings who have made mistakes,” Howard said, “Very few of them are incapable of change. Many of them will do great things and make us proud if we support them well.  Zack is the embodiment of that belief.”

Johnson is grateful for the opportunity to prove his potential to himself and sees his release as a turning point, he said.

“When I heard the final verdict on Monday, I felt an amazing sense of relief,” Johnson wrote. “At that moment I knew my life was now on the right path and that I had the right people in my corner to see me through it.”

Correction: This article was corrected to update the terminology for incarcerated persons.