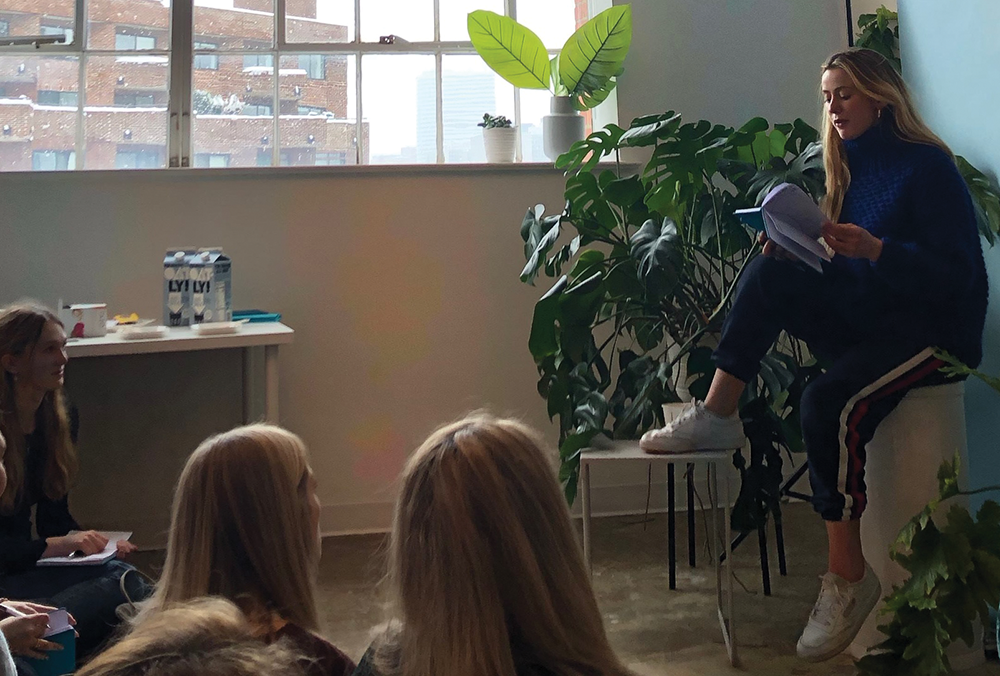 As a blizzard swept through Washington, D.C., on Jan. 13, magic was brewing inside a bright, plant-filled event space in Georgetown: Instagram influencer Caroline Calloway was leading her creativity workshop, the second in an inaugural tour she had planned to host this spring.

With Instagram’s growth as platform, the people using the social networking app are no longer just close friends sharing filtered photos with each other. The Instagram influencer, or content creator, has turned that digital space into a blog, sharing photos and stories of their lives on public accounts to attract followings. While some become influencers from tangible professions like being a makeup artist, using the platform lucratively through sponsorships and other venues, some, like Calloway, earned their following from transparently sharing their lives.

Caroline Calloway first rose to prominence while studying history of art at the University of Cambridge. Originally hailing from Falls Church, Va., she spent her time across the pond documenting her life in England on Instagram. In her three years at Cambridge, she amassed a following that grew exponentially and attracted a lot of attention.

She has continued to grow her Instagram brand by focusing on one of the newest sectors of the application: the “stories” feature. Each day she posts dozens of photos with lengthy captions detailing both the positive and negatives of everyday life. These stories have had widespread appeal, and her followers, like Michelle Hodge, a 20-year-old student from Baltimore who commuted to the D.C. workshop, tend to empathize with her posts.

“I relate to [Caroline’s] content because, unlike most creators, she is radically vulnerable and shares moments of happiness alongside moments of confusion and anxiety,” Hodge wrote in a statement to The Hoya. “I came to the Creativity Workshop to translate her online storytelling into tangible advice which I can use on a daily basis. The workshop exceeded my expectations.”

Ashley Kammerdiener, a 23-year-old from Annapolis, Md., has been following Calloway for over five years and felt the opportunity to meet her was unmissable.

“[Calloway] is open, honest, and raw; I find that to be so strengthening and inspiring. The workshop itself was such an awesome way to spend the day and I’d do it again if I could,” Kammerdiener shared in a message to The Hoya.

The now-27-year-old Calloway hoped her Instagram account could serve as a stepping stone to ultimately become a memoirist. In 2015, during her final year at Cambridge, Calloway’s account scored her a lucrative book deal, seemingly proving her Instagram captions had catapulted her into mainstream success.

In July 2017, Calloway pulled out of her book deal and suddenly found herself unsure, broken and debt-ridden — but certain she had made the right creative choice. She felt the book, which was supposed to be a memoir, at this stage in her life would be too boy-focused, somewhat sexist and not appropriately acknowledging of privilege. In response, her publishers decided to withdraw from her contract, putting Calloway in debt, according to an interview with Man Repeller.

After the dissolution of her book deal and the ensuing period of self-doubt that Calloway experienced, the tour felt like a way for her to acknowledge and reclaim her life.

“The lessons I’ve learned over the past few years of my life – which have been a very difficult chapter – mean a lot to me,” Calloway said in an interview with The Hoya. “But I knew that those lessons would mean even more if I could share them with other people.”

After closing that chapter and the mental health repercussions that came with it, Calloway turned a new leaf and resumed her role as a relatable, refreshingly vulnerable presence on Instagram, where she has almost a million followers. She bills herself in her bio on the app as a “Writer, Art Historian, Teacher,” and, until Jan. 14, she was on the brink of beginning a world tour to share those lessons.

Seemingly on a whim in December 2018, Calloway had the idea for a creative workshop. After positive response from her fans, the idea ballooned into a whole tour, with tickets being sold almost immediately before she had even booked any venues, according to Insider.

Calloway was scheduled to host workshops offering advice and anecdotes about creating art, mental and physical health, and heartbreak, spending her first several months in U.S. cities before beginning an international leg.

Each of Calloway’s tour dates started off with an hour of coffee and mingling for tour attendees to get to know one another before Calloway arrived, according to the online syllabus. When she finally entered the room in D.C., she introduced herself to every single person in the room, doling out hugs with abandon. Before diving into the workshop material, she handed out custom-designed robin’s-egg-blue journals, in which she had penned the name of each recipient and an affirmation, as well as envelopes of stickers for journal decoration.

The first section of the lecture was interactive and centered on creativity. Through her activities, like creating Venn diagrams, she made the audience engage with questions about consumption and creation. In her lecture, she continuously emphasized the importance of self-compassion and mental stability to create good art, often looking like she was on the verge of tears.

Calloway’s second subject was making art. The two key ingredients, according to Calloway, are time and space. Calloway advised her audience to engage in a practice called “morning pages” and hand-write three pages in a journal every morning, which author Julia Cameron outlines in her self-help book, “The Artist’s Way: A Spiritual Path To Higher Creativity.”

After “making art,” the group broke for lunch. When the workshop regrouped, she shifted gears to mental and physical health, noting the importance of exercise and healthy eating, acknowledging the pressure placed on women to achieve certain beauty standards, and then emotionally diving into the mental health concerns intertwined with her past Adderall addiction. She emphasized the importance of surrounding yourself with people that inspire you.

“I hope there is a quality of our friendship that lifts you up,” Calloway said at her workshop.

The final section of the workshop focused on heartbreak. Calloway discussed her breakup with a recent boyfriend before turning to the abstract. She then explained the sadness that accompanied being rejected from the University of Cambridge twice before finally receiving an acceptance letter, as well as the difficulty of quitting Adderall after several years of dependence.

“Time being sad and making mistakes isn’t time wasted,” Calloway said during the workshop. “It’s time you grow from. Figure out how to be the architect of your own life and integrate the things that used to bring you shame.”

Throughout the workshop, Calloway felt more like a friend than a teacher. She gave advice and confided in attendees more than she lectured and she was quick to make light-hearted jokes at her own expense — like when she realized the “stool” she was sitting on was, in fact, a garbage can.

Yet, her penchant for tangents and lackadaisical storytelling significantly reduced the amount of time spent teaching; for example, one of the advertised subjects of her lectures was “building an Instagram brand,” a subject she didn’t mention in the workshop. Some fans were frustrated by the event’s lack of organization and Calloway’s changing promises for the event, according to Insider.

At the end of the lecture, care packages were distributed and a photo area was set up where Calloway individually met and took photos with each attendee. The conversations she had with each person were quiet and vulnerable; more than one person left with tears in their eyes.

The District was the tour’s second stop, and already Calloway admitted to having learned a lot: After the first date in New York, she hired a three-person staff, amended the syllabus and re-evaluated and reallocated her budget. She began the tour intending to do it completely alone, but she soon realized that endeavor was unrealistic — and not just because her studio apartment was full of boxes of over 1,000 mason jars.

However, Calloway’s unfiltered tendencies when sharing stories and her genuine love her fans seemed to have been her tour’s downfall. During the D.C. workshop, she mentioned learning of a Twitter thread criticizing her workshops as a “scam,” but said she was determined to block out the negative energy.

Yet the criticism seems to have gotten to her: The following morning she posted a note to her Instagram followers in which she apologized for the constant changes that occurred because of her impulsivity and inexperience with event planning. Calloway also vowed to refund everyone, even the people who had attended the New York and D.C. events, for their tickets at $165.

“I take full responsibility for letting my total inexperience with event planning and GREED create a situation where the details of the tour were ever-changing, preparation was inadequate, and the event did not match the description by the time it went on,” Calloway wrote in her stories.

She quickly refunded fans — but also sent out an email with a link for voluntary donations — and had remained quiet on her social media since Jan. 14, other than to share a BuzzFeed News article that offers her side of the story.

“If I ever do a live event again someday, the lessons I’ve learned from this experience will be at the core of its planning and organization,” Calloway said.

“Someday” appears to be very soon: Calloway announced through Instagram stories Jan. 16 that she was restarting the tour to try to rise above the effects of online negativity, an attitude she had first echoed at her workshop.

Last Saturday, Calloway hosted another workshop in New York, according to New York Magazine, the first since restarting her tour. Instead of an Eventbrite page, she is having her fans email her with their name, Instagram handle and why creativity and resiliency are important to them at this point in their lives.

“I’ve spent the past two years being very quiet and healing,” Calloway said in an interview with The Hoya. “I often thought during that time that that quiet chapter meant that I would not become someone who lived a great life, but chapters of quiet healing are how people who live great lives get made.”