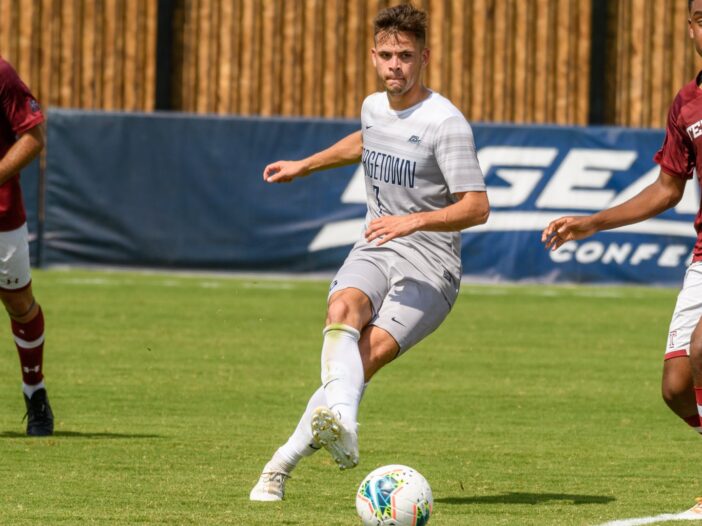 A national champion and Big East midfielder of the year, Jacob Montes (COL ’21) is one of the best Hoyas in recent Georgetown soccer history. After graduating in 2021 he was offered a trial and eventually signed by Crystal Palace. He continues to play in Europe today where he is playing his trade for Belgian side RWD Molenbeek on loan from the South London club.

The Hoya sat down with him to discuss his career at Georgetown, his signing with the English Premier League club Crystal Palace F.C. and his soccer aspirations. This interview has been edited for length and clarity.

What is the biggest difference between playing at Georgetown and a professional European league? What have you had to adapt to?

The first thing that stands out is not the quality. It is not much better than even the MLS [Major League Soccer] or the higher levels of college football. But it is more physically demanding. I had to adapt to this as I like to be a more technical player. But it is good for my development and is good preparation for later on in my career where hopefully I’ll be playing at a higher level.

Why did you elect to go to college and then Europe, rather than go the MLS route?

After my junior year, when we won everything, the Portland Timbers Academy offered me an MLS contract. At that point, I think I was too far along in the college process to not get my degree from Georgetown. That’s why I elected to not do it at that time.

During that 2019 national championship season, you starred as a midfielder with 11 goals and 5 assists. What was that run like?

From the beginning of that year, we knew that it was going to be our really good year, whether we made it to the national final or whether we lost in the Big East tournament. Throughout the season when you are training with the group, you get the feeling as a team like, ‘We have the potential to do something special this year.’

We had one goal: to not only win the Big East but win the national championship, and we were able to do that. The main reason we were really successful that year was the environment we had in training every day. It was really competitive, and everyone had the ability to sacrifice for themselves. The seniors who weren’t playing weren’t bitter, and the guys on the bench would be the first to celebrate a big goal.

Did having a team-first mentality help take the pressure off you?

Yeah. Obviously there is the starting group, but our coach did really well to mix things up. The day before a game, we wouldn’t know who the starting group was. Everyone was always competing, and that was the main thing.

We just held ourselves to a really high standard whether you were coming off the bench or not, and I think if you look at the statistics that year, our coach made more subs than the rest of the coaches combined. It was crazy how many subs he would make.

Georgetown men’s soccer did very well again this year. Did you follow their success?

Of course. It was unfortunate to lose. I think the program itself after the national championship win is held to such a high standard. It was good to see Dante [Polvara] winning the Mac Hermann Trophy, the first one in our history.

Yeah, he’s a really good player. Sometimes in training, he would just make these runs out of nowhere from the deepest position possible and be in the box in seconds. We were like, ‘What is this guy doing?’ I still keep in touch with him, so I’m looking forward to seeing how he does in Scotland.

Sean Zawadzki. When I was playing for Georgetown, it felt as if you didn’t have to worry about anything when he was playing in that six role.

What do you want to achieve in the next six months?

It hasn’t been a breeze for me in Belgium. I haven’t played too many matches, and although I feel like I train very well, it’s hard to break into the squad.

In my first year as a professional, I think it’s something I need to learn how to deal with mentally.

Is your dream to play in the Premier League?

Yeah. The Premier League is the best league in the world. It would be interesting to see if I could play to that level, at that pace and to that level of physicality. I believe I can.