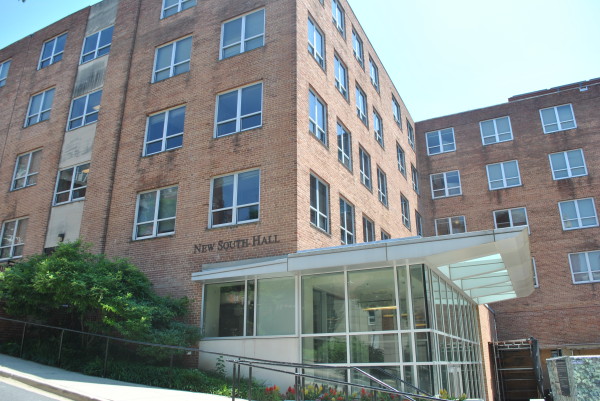 An intruder followed students into New South in the early morning of Sept. 19, prompting a Georgetown University Police Department (GUPD) investigation and safety concerns among students.

At approximately 1 a.m. on Sept. 19, the perpetrator reportedly tailed behind students and gained entry into first-year dormitory New South. A New South resident assistant reported to GUPD that an unknown individual had entered the dormitory, according to a Sept. 20 email from Jay Gruber, GUPD chief and associate vice president of public safety, to New South residents obtained by The Hoya.

While GUPD searched the dormitory for the intruder, an unknown person pulled the fire alarm, prompting an evacuation by all residents. Officers located a suspect and confiscated a pocket knife from him; however, he fled before he could be apprehended, according to the Sept. 20 email.

The next day, GUPD officers detained the suspect and are now working with the Metropolitan Police Department, according to the Sept. 20 email.

According to a New South resident who wished to stay anonymous because of safety concerns, the perpetrator entered a women’s bathroom while she was using it. The intruder whispered to her, asking what her name was, and ignored her requests to leave the bathroom before following her back to her room.

That same night, at approximately 3 a.m., residents of Copley Hall were evacuated from the building after the fire alarm went off. According to a university spokesperson, the incident was unrelated to the break-in at New South and was instead caused by a smoke detector going off. GUPD also stated that there is no evidence the New South intruder entered any other buildings on campus.

There is no ongoing safety threat to students, according to the Sept. 20 email. Additionally, in response to the events, GUPD has increased its presence in campus residence halls and urged students to take caution while entering and exiting dormitories to prevent tailgating, according to the same email.

Some students, however, have expressed frustration that neither GUPD nor university administration alerted students of the situation through an email or text message alert. GUPD first addressed the incident at 9 p.m. on Sept. 19 in an email to New South residents, nearly 20 hours after the incident took place.

After news of the break-in spread around campus and social media, Caleb Richmond (SFS ’25) began circulating an open letter demanding improved university communication during emergency situations. As of Sept. 22, 328 students have signed on to the petition.

When contacted for comment, a university spokesperson referred The Hoya to the two emails sent from Gruber to New South residents Sept. 19 and Sept. 20. Gruber did not respond to multiple requests for comment from The Hoya.

The university should have done more to alert students about the situation, according to the anonymous New South resident.

“I know that they sent an email to all New South residents, but I feel like they should have done that for the other residence halls and for every student on campus, because this was somewhat of a security threat, and all students should be aware to be vigilant and know that this happened on campus and that they should watch out.”

The lack of immediate communication from the university or GUPD worsened the situation for students, according to Richmond, who was visiting friends in New South when the fire alarm went off.

“While transparency is a more long-term goal, I wish the university had told us anything during the events last night (i.e. shelter in place or something of the sort) as opposed to letting confusion spread through their silence,” Richmond wrote in an email to The Hoya.

Student Aiden Gillies (SFS ’25), who said he interacted with the intruder in New South, felt differently. Gillies said that despite confusion among students over what was happening, GUPD was able to do its job effectively.

“All of the GUPD officers were very prompt with the information that they were given at the time,” Gillies said in a phone interview with The Hoya. “They were very good about interviewing myself and all of the others who were present during the situation, so I would say on that side they handled things very well, very professionally.”

Knowing the suspect was detained has been a relief, according to Gillies.

“I’m just glad that he’s been in custody now and that he was arrested — I’m just happy about that,” Gillies said.