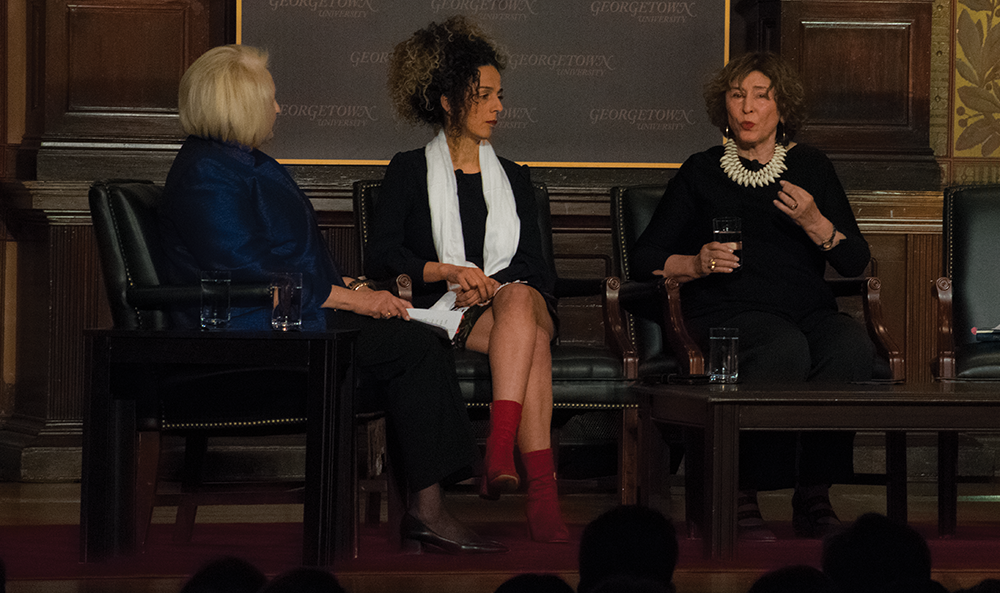 Oppressive policies toward women in the Middle East must be combatted, scholars, leaders and activists said at a panel on women’s rights in Iran on Dec. 5.

Iran currently ranks in the bottom third among 153 countries in a women’s well-being and empowerment index created by the Georgetown Institute for Women, Peace and Security, which hosted the event. Iran’s low ranking in the index, which evaluates countries based on peace, security, women’s inclusion and justice, stems from legal discrimination against women in divorce and workplace laws.

After the formation of the current Islamic Republic of Iran, the government mandated that women cover their hair. The hijab requirement has contributed to a general decline in women’s rights in the country, according to Boniadi.

“At the inception of the Islamic Republic 39 years ago, tens of thousands of Iranian women demonstrated in opposition to the new government’s compulsory hijab ruling,” Boniadi said. “Their cries were met with batons, lashes, acid thrown in their faces and imprisonment.”

Nafisi wrote “Reading Lolita in Tehran: A Memoir in Books,” an account of her experiences after returning to Iran during the revolution. Laws that require women in Iran to wear hijabs in public spaces are not merely religious requirements, but a way for the Iranian government to repress and control women, according to Nafisi.

“The hijab in Iran is not about religion. It is about an ideology in order to preserve power. It is uniformity. It is like Mao jackets that people wore in the Republic of China,” Nafisi said. “[The Iranian government] brought this uniformity and they made women into semiotic signs, into political entities, you know. The first thing they did in culture was to delete women.”

Without the mandatory hijab law, some women would choose to expose their heads, according to Nafisi.

“If this was Iranian women’s tradition and we believed in it, why do you have to use guns and jail and punishment and impose a law for them to wear it?” Nafisi said.

Alinejad, founder of the My Stealthy Freedom campaign against the compulsory hijab, was exiled from Iran after posting an Instagram picture of herself in the country without a hijab.

Social media gives a voice to women in the Iranian women’s rights movement, according to Alinejad.

“In Iran, for 40 years, we never had the chance to be seen, to be visible,” Alinejad said. “Through social media we gained our voice back. That is why I always say that every individual woman in Iran can become their own leader and we get successful if every one of us became a headache for the government of Iran.”

Nafisi has been labelled as Western by Westerners who critique her position as an Iranian woman opposed to compulsory hijab laws and the Iranian government, she said.

“They would look at you and say, ‘But it’s your culture,’ or they would call me ‘Western,’ you know, and ‘an agent of Western imperialism.’” Nafisi said. “As if only Western women want the right to life, liberty and pursuit of happiness.”

Alinejad called for Western women to support Iranian women’s rights despite the common argument that gender inequality is part of Middle Eastern culture and said supporting women’s rights does not make Westerners Islamophobic.

“By calling this our culture, you are insulting us, and culture is not written to stone, it is flexible. It changes generation to generation. Join us and be loud enough,” Alinejad said. “Supporting the women’s rights movement in the Middle East, in Saudi Arabia, in Iran, doesn’t make you Islamophobic.”

Limiting women’s rights can negatively affect the success of a nation’s economy, according to Molavi.

“Show me a country that provides its women with equal rights, both legislatively and culturally, and I’ll show you a successful economy,” Molavi said.

In addition to oppressing women, the Iranian government also hinders the success of the Iranian economy through its guiding ideologies, according to Sadjadpour.

“It’s a government who their organizing principle isn’t life, liberty and the pursuit of happiness, economic prosperity of the people,” Sadjadpour said. “It is death to America, death to Israel, mandatory hijab — and as long as that is your organizing principle, you are always going to fall way below potential.”

Sadjadpour said he believed that some of these ideologies could change, stating that he was optimistic about the values of the younger generation of Iranian men.

“Men essentially sat on the sidelines as women were being beaten up,” Sadjadpour said. “It’s a real source of shame, but I feel optimistic that the younger generation of Iranian men have a much different vision.”