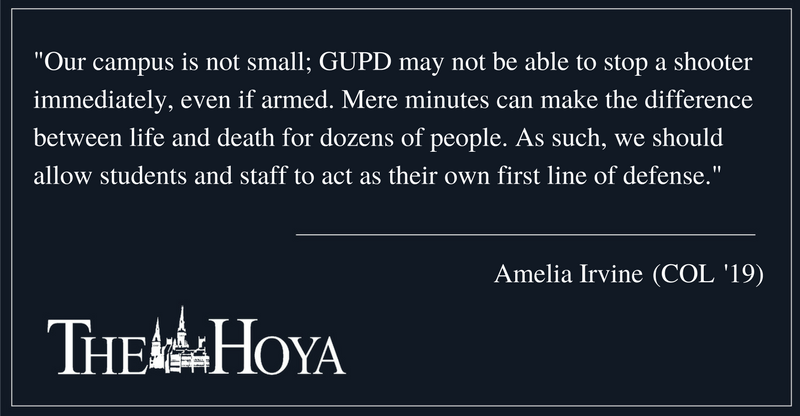 Laws restricting gun ownership will not prevent gun violence or end school shootings. For our safety, Georgetown University should arm campus police and the D.C. Council should allow students to carry firearms on campuses.

Joining nearly 3,000 schools nationwide, Georgetown students participated in a walkout Wednesday to demand legislative action against gun violence. The protest was organized in partnership with Empower, the youth wing of the Women’s March Network.

Yet, begging for gun control will not make our campus safer; allowing students and Georgetown University Police Department officers to exercise their constitutional right to bear arms will.

GUPD’s 2017 security report explains the current means available to officers in the case of an attack. “All GUPD officers are unarmed. […] Officers carry safety batons and pepper spray and are provided with a protective vest.” If a person with a firearm steps onto campus, GUPD officers will be armed only with batons and pepper spray, both of which are only effective in close range.

GUPD Chief of Police Jay Gruber wrote in an email that “arming GUPD officers with firearms is a University executive leadership decision.” We expect GUPD to keep us safe, but the university has not given GUPD sufficient means to protect students in an active shooter situation.

Georgetown is a university: Many of our students are over 21 and can obtain concealed carry licenses in D.C.. As such, we should consider arming not only GUPD officers, but also students and staff.

Our campus is not small; GUPD may not be able to stop a shooter immediately, even if armed. Mere minutes can make the difference between life and death for dozens of people. As such, we should allow students and staff to act as their own first lines of defense.

We need not fear guns on campus. More than 300 U.S. college and university campuses have allowed licensed concealed carry, according to advocacy group Students for Concealed Carry. According to the group, as of spring 2018, no deaths, assaults or suicide attempts have been reported on any of these campuses. The organization found only seven accidental or negligent discharges at colleges allowing campus carry, three of which caused no injuries and none of which caused severe injuries.

Unfortunately, concealed carry on any public or private university campus in the District, is illegal. Georgetown is a gun-free zone, legally defined as an “area where use or possession of firearms is considered as a crime.”

More than 96 percent of public mass shootings from 1998 to 2015 occurred in gun-free zones, according to the Crime Prevention Research Center. This statistic suggests either mass shooters select gun-free zones intentionally or shooters are able to kill more people in a gun-free zone because no armed person can stop them. Allowing the Georgetown community to be armed would give students and staff the chance to stop a would-be mass shooter.

Wayne LaPierre, executive vice president of the National Rifle Association, often says the only way to stop a bad guy with a gun is a good guy with a gun. His point is too simplistic; the argument against arming teachers and students merits consideration.

Yet, Ingraham and critics of the “good guy with a gun” theory ignore a key driver of school shooters: a desire for infamy. According to criminologist Adam Lankford, the deadliest mass shooters expressed a strong desire for fame and an awareness that a higher body count will lead to more media coverage. Therefore, arming GUPD police officers, students and faculty could deter a deadly mass shooter. We would send a strong message to potential shooters: You cannot become infamous on our campus.

I agree with those who walked out this week: Students should not need to fear a shooter attacking our school. But the gun-free status quo does not make us safer — it leaves us vulnerable and defenseless.

Amelia Irvine is a junior in the College.