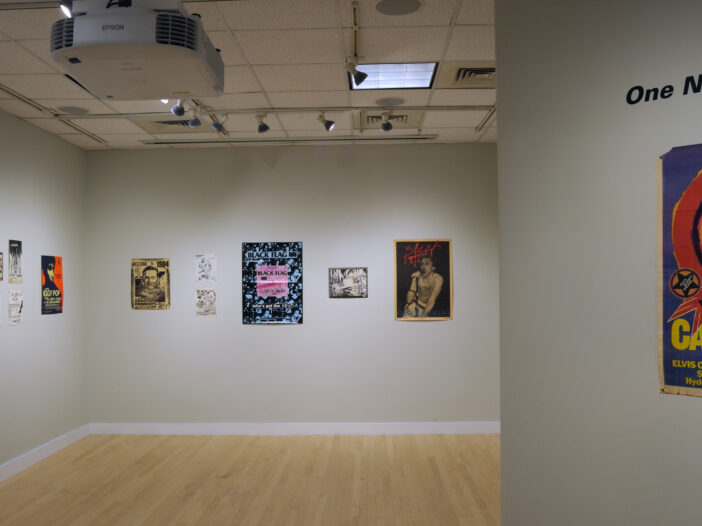 Adorning the walls of Georgetown University’s Spagnuolo Gallery is a variety of cultural memorabilia commemorating one of the most influential cultural and political movements in Washington, D.C.’s history: the rise of punk rock in the 1970s and 1980s.

From noted punk bands of the era like the Cramps to Marginal Man, the exhibit nods to some of the major pioneers of the D.C. punk movement, paying tribute to the infectious citywide eruption of punk music.

“One Nation Underground” is a powerful history that echoes throughout D.C. and the broader music scene. By chronicling the social and musical developments of the time, this exhibit opens the door to explore the rich history of punk music in the District.

For example, the opening of the exhibit features many colorful band posters promoting various punk group performances at D.C. venues, including one for Bow Wow Wow and Bush Tetras at the Ontario Theatre in 1982. Many of the band posters featured are visually cluttered and discordant, speaking to the striking visual culture produced by bands and fans themselves.

Emerging from social and economic uncertainty in D.C. throughout the 1970s and 80s, young Washingtonians pioneered the District’s punk scene, creating a community rooted in resistance, resilience and innovation.

The punk rock movement emerged in conjunction with social pressures and economic instability in 1970s D.C.

According to Benjamin Harbert, a Georgetown professor of music with a Ph.D. in ethnomusicology, the District’s punk impulse stemmed from a wave of urban crises in the 1970s, such as urban redevelopment efforts.

“A lot of white flight had rid the city of a lot of wealth and the social services the city provided had dried up. There was an economic crisis and there was a lot of fear of crime in the streets and sanitation workers going on strike,” Harbert said in an interview with The Hoya. “So you had a bunch of artists who were like, ‘Let’s make this our playground, and let’s make statements.’”

Female and Black musicians led the D.C. punk movement in the 1980s. All female bands like Chalk Circle exploded onto the scene, as well as talented solo artists like bassist Toni Young, who went on to join the famous punk band Red C.

“When you first walk into the Spagnuolo, there’s a poster that says ‘Notting Hill Carnival,’ and it’s a Rock Against Racism poster,” Bourland told The Hoya. “The first thing you see about the punk shows is also about this moment, across the Atlantic, really, where there were progressive people in these music scenes, fighting very similar battles — the ones we’re still fighting today.”

While the movement as a whole was characterized by its new musical style at a time when progressive political discourse was blossoming in the city, what truly made the era special were the ways in which innovative opportunities emerged for musicians through this new sonic experimentation.

Directly across from the Spagnuolo Gallery once stood the Hall of Nations concert venue. It was there, during the genesis of D.C’s punk movement at a concert headlined by the Cramps, where 17-year-old Ian MacKaye fell in love with punk.

A former frontman of D.C. punk groups like Minor Threat, the Teen Idles and Fugazi, and later co-founder of independent music label Dischord Records, MacKaye remembers the exact moment when he fell in love with the genre.

A well-known figure within the District’s punk movement, MacKaye remembers that the magic of D.C. punk lay in its openness — its ability to garner avant-garde sound, create a sense of community and most of all, welcome any and all who were remotely interested.

“There was a permission with punk that says you didn’t have to be trained,” MacKaye said. “If you want to do it, you could do it. It was like straight-up permission. And I was very intrigued by that idea.”

Brendan Canty, an adjunct professor in Georgetown’s department of performing arts and former drummer for local punk bands Rites of Spring and Fugazi, also notes that the District’s punk scene grew exponentially by reaching people like MacKaye with its new sound.

“When that weirdo music becomes more popular and touches more people, it creates again. It begets itself. It’s self perpetuating,” Canty said in an interview with The Hoya. “The more people come out, the bigger the scene is, the more weird bands exist and that brings in more people — and it just blossoms and flowers.”

Furthermore, following this pattern of growth, according to Canty, the D.C. punk scene gripped local youth like himself in its distinctiveness, hooking the city with its unique sound and artistic magnitude.

“I quickly realized that not only do we have a punk rock scene in D.C., but we really had the best punk rock scene in the world as far as I was concerned,” Canty said in an interview with the Hoya. “It became very apparent that not only was it just like a vital scene, but it was actually like a musically important scene and very distinctive, and I wanted to be part of it.”

The individuality of D.C.’s punk movement is one of the major factors that helped to shepherd its growth, aided by an air of openness and excitement in the movement that caused people like Canty and MacKaye to want to join in.

With an emphasis on creative expression and a lack of a formal musical experience requirement, the D.C. punk scene blossomed into an extremely close community of artists, performers and fans.

According to Jim Saah, photographer and author of “In My Eyes,” a 2021 book critically acclaimed for capturing the essence of the District’s punk scene in photos, part of what made the movement so appealing to newcomers was the lack of physical and emotional barriers between the artists and audiences.

“When I went to see the punk rock shows, the breakdown between the audience and the performer was staggering because people could participate in it,” Saah said. “You could jump on the stage and sing along in the mic and you could sweat on the singer. It’s like a total immersive, communal event and that participation was what was so intoxicating for me because you weren’t a spectator — you’re a participant.”

This intimate connection between performers and fans itself was built on principles of inclusion and self-sufficiency. For anyone with a creative inclination, D.C.’s punk movement offered a chance to imagine and realize a more inclusive and supportive world, according to Canty.

“Punk rock to me is the foundation of what became my created world,” Canty said. “It can be construed as a musical sound, but ultimately, I think what it is, it’s a little bit more like a set of a set of ethics or a non-pretentious approach to music that allows that a little bit bigger tent — allows people in to a world that is mutually supportive, that is self-supportive and self-sufficient.”

Canty said the D.C. punk scene has provided him with a lifetime of community and connection.

“What seems to be like a hyper-localized reality from your ‘scene,’ it follows you throughout your entire life,” Canty said. “It might not seem very visible because it’s not supported by any major record company, and there’s no press campaign, and nobody’s getting rich and nobody’s getting payments or grabbing the headlines, but that community continues to exist.”

As seen through the experiences of those involved in D.C.’s punk scene during the 1970s and 80s, it is evident that a vibrant community existed during the time that was committed to supporting each other creatively and personally.

Though time has passed since the movement’s peak, the spirit of punk remains tangible in D.C. The essence of D.C. punk endures not just through the souvenirs currently displayed in the Spagnuolo Gallery, but also through a sense of long-lasting community it instilled in its artists and listeners.

“The scene is not fixed. So you don’t come up in it. You come up of it,” MacKaye said. “You can make community through inclusion.”

Musicians from D.C. punk’s heyday continue to have an impact on the community by exercising their values. On Friday, April 1, District residents can experience Canty’s drumming in action when the Messthetics play St. Stephen and the Incarnation Epsicopal Church, a notable punk venue since the 1980s. The event, which starts at 7 p.m., will be a benefit for Ukranian and Afghan refugees.

“That’ll be a great show,” MacKaye said. “It’s put on by Positive Force D.C., and it’s a benefit. That’ll give you a different flavor of what the punk scene here was like.”

By helping to sculpt a notion that creative agency can lie in the hands of its actors, D.C. punk is an example of individual power in music. The movement helps to show that art can be widespread and influential while remaining true to the artists and their communities, according to Harbert.

“They continue to define that doing it yourself means working collaboratively with a community rather than subscribing to a service,” said Harbert. “They remain a beacon of possibility in a world that’s bought and sold all the time.”

The movement’s power in shaping important dialogues about musical and social issues has not gone away. Punk culture can still unite and empower people, according to Bourland.

“These struggles are ongoing. So I think we can maybe glean a sense of intergenerational solidarity,” Bourland said. “There’s something sort of empowering about punk culture, and I hope that is resonant for a younger generation.”

It is evident today that the District’s punk era still lives on though the people it touched in the 1970s and ’80s. Punk’s rise in D.C. illustrated a shared sense of creativity that anyone can still engage with today — one that can never disappear, according to MacKaye.

“It’s a new idea, and it’s a really exciting moment. And that’s what I still think about punk,” MacKaye said. “It’s why I think it can never die.”