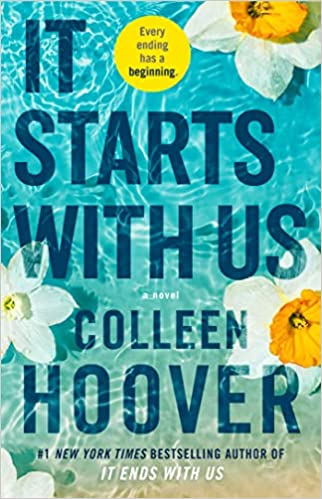 CW: This article references domestic violence. Please refer to the end of the article for on- and off-campus resources.

Colleen Hoover’s name is now synonymous with the romance genre; her uber-hit novel “It Ends With Us” has been sitting on The New York Times Best Sellers list for 75 weeks. While “It Ends With Us” focuses on the darkness of the cycle of domestic abuse, “It Starts With Us” offers a satisfying conclusion to that cycle, giving the characters a definitive happy ending that fans of the first novel will appreciate.

Hoover rose to fame through TikTok, leading to the sale of over 20 million copies of her novels. As a sign of gratitude to her readers, she wrote “It Starts With Us,” a sequel to “It Ends With Us.”

“This novel was written as a thank-you for the tremendous support, and because of that, I wanted to deliver a much lighter experience,” Hoover wrote in a letter to readers at the beginning of the novel. “Lily and Atlas deserve it. I hope you enjoy their journey.”

“It Starts With Us” resumes Lily’s story 11 months after the birth of her daughter, Emerson, whose father is Lily’s abusive ex-husband, Ryle. Lily must navigate both raising a daughter as a single mother and running her floral business on her own.

Lily’s ultimate challenge, however, is facing Ryle as she pursues her first love, Atlas. In the first novel, Atlas drove Ryle’s jealousy to boil to the point of assaulting Lily.

Although Lily and Ryle divorced, they still co-parent Emerson. The possibility of Ryle’s aggression spiraling into violence dictates Lily’s decisions, with the remnants of his abuse seeping into her life outside of their relationship.

Critics have argued that Hoover’s books romanticize abuse against women and define characters by the trauma they endure; Hoover seems to make a conscious effort to respond to those critiques in “It Starts With Us.”

For example, Hoover allows Lily to become more confident and independent as she distances herself from Ryle. Additionally, Hoover displays Lily going to great lengths to protect Emerson in the custody arrangement, prohibiting Ryle from having unsupervised and overnight visits with Emerson.

Lily also chooses to have a relationship with Atlas despite Ryle’s hatred for him. Lily creates a life for herself separate from Ryle’s world, even if her well-being is threatened in the process.

By alternating between Lily and Atlas as the narrators of each chapter, Hoover provides insight into the minds of both protagonists. Atlas’ perspective is particularly important for understanding Lily, as his perception of Lily contextualizes what a healthy relationship should look like, juxtaposed with the abusive relationship between Lily and Ryle.

Atlas’ character stands in stark contrast to that of Ryle, creating a proper standard for the ideal partner. Atlas is extremely selfless, always adapting his life to the needs of his loved ones, especially Lily.

In contrast to “It Ends With Us,” Hoover clearly paints Ryle as a villain without redeeming qualities. The first novel introduces Ryle as a handsome neurosurgeon and gradually reveals his abusive tendencies, which confuses the reader into thinking that there is potential for Ryle to change.

“It Starts With Us,” however, immediately portrays Ryle as aggressive, dangerous and violent, which combats the idea that Hoover romanticizes Ryle’s abusive patterns. Hoover furthers this point by almost exclusively featuring Ryle in scenes in which he threatens Lily and puts her in danger.

Lily’s continued struggles in “It Starts With Us” bring attention to the permanent trauma that results from abusive relationships, particularly within families. Hoover herself wrote the “It Ends With Us” series in response to watching her father physically abuse her mother, which is reflected in both Lily’s and Atlas’s suffering and witnessing abuse at the hands of their family members. With an author as beloved as Hoover bringing attention to these realities, hopefully more survivors of domestic violence will be encouraged to seek support.

Stylistically, Hoover’s writing is not destined for a Pulitzer Prize. The multitude of cliches, such as “I had no idea I was half of myself without her,” the random references to TikTok and the made-up term “boolennial,” a fusion of baby boomer and millennial, add little to the narrative.

Hoover always has her youthful, TikTok-making audience at the forefront of her mind, which is why she uses simple language to make her writing more accessible. Hoover’s audience reads her novels for the emotional, compelling plot rather than the quality of the writing itself, regardless of what critics may think.

“It Starts With Us” is sure to resonate with lovers of its predecessor, as it finally gives Lily the healthy, loving relationship that she, and readers, have always desired.