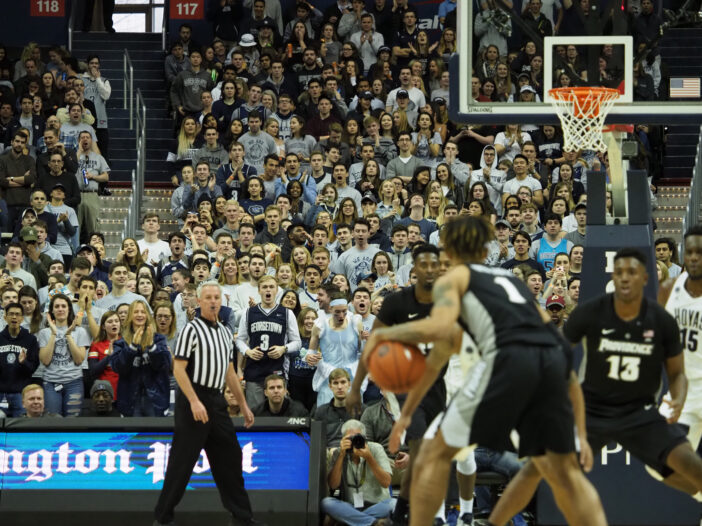 Following over 600 days since spectators were last allowed to attend Georgetown basketball games, Hoya fans will once again be able to cheer on their beloved basketball teams in person.

With last year’s NCAA regulations banning spectators from stadiums due to the COVID-19 pandemic, the Hoyas were forced to compete in empty stadiums. Men’s basketball opened Big East play against Villanova in a silent McDonough Arena, and the women’s season didn’t start until Dec. 19, 2020, after seven canceled or postponed games. Not a single Hoya was present for Georgetown’s Big East Championship triumph over Creighton, an event that would have elicited busloads of Georgetown students traveling to New York in a non-pandemic year. Thus, the return of fan-filled arenas will be a welcome change for both athletes and students.

The last time Georgetown fans made the journey to the Capital One Arena in Washington, D.C.’s Chinatown neighborhood was March 2020. Since then, a lot has happened. While the women’s team struggled with a dramatically shortened season, now-sophomore guard Kelsey Ransom emerged as a young star, earning Big East All-Freshman Team honors.

For the men’s team, a mercurial regular season culminated in a Cinderella run to win the Big East Tournament, leading the Hoyas to their first NCAA tournament berth since 2015. Like Ransom, now-sophomore guard Dante Harris cemented himself as a top point guard, winning the Big East Tournament’s Most Outstanding Player award.

The most important storyline in the climactic return of fans will be its impact on two incredibly young rosters. Nine of the 14 men’s players are first-years or sophomores who have never played a collegiate game in front of a crowd before, let alone an electrifying home crowd at Capital One Arena. The same can be said for the women’s team, where eight of the 15 players on the roster are first-years or sophomores. While they were all top players in high school and have surely played in big emotional games, the transition to playing before thousands of fans in person and on television will be critical.

In spite of the bolstered home-court advantage, the return of fans could see a regression in scoring across college basketball overall. In the National Basketball Association (NBA) bubble, an isolated campus for players during COVID-19, average scoring saw a remarkable increase, including improvements to overall free-throw and field goal percentage. Average offensive efficiency saw a jump from 110.7 points per 100 possessions to 114.2 points. Arenas without fans mimic practice conditions, a setting which boasts undeniably lower stakes, perhaps providing an explanation for offensive prowess without fans present.

However, college basketball players will be eager for the return of fans. In the 2020-2021 season, home teams only won 57.3% of the games with limited fan capacity, the lowest percentage since the statistic has been measured. Basketball fans across the country can find solace in knowing their in-person support has tangible effects on the performance of their team.

“Throughout the whole semester, I’ve emphasized buying the season tickets. We have an opportunity to go back to Capital One Arena in full force,” Fidance said in an interview with The Hoya. “The vast majority of the club are sophomores and freshmen who have never experienced a basketball game. There is a desire to recreate past year’s enthusiasm, and to go beyond it. “

It’s not hard to see basketball is on the mind of Georgetown community members; John Thompson Jr.’s “I Came As A Shadow” is one of the most popular books on campus, Ewing sightings on campus warrant whispers and discreet photographs, and one can’t walk five steps without seeing a vintage or faux Etsy-find Georgetown basketball crewneck. Georgetown basketball is an institution in its own right, and its return is welcomed across campus and beyond.