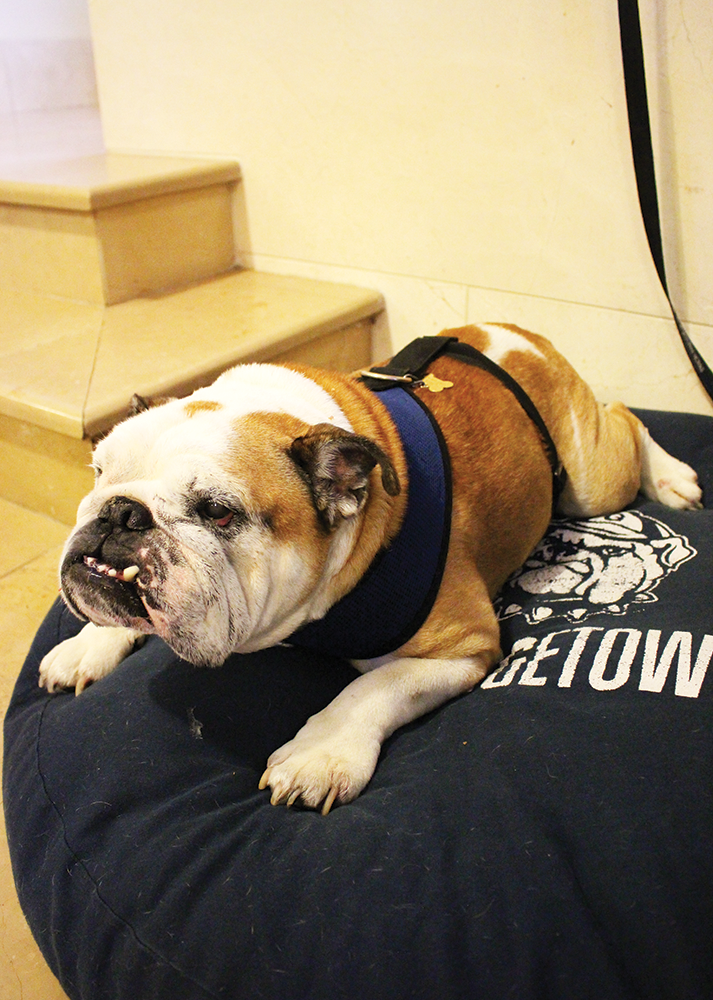 After 12 years on campus and a decade-long career as the beloved university mascot, John S. Carroll, better known as Jack the Bulldog Sr., passed away June 2. He was 12 years old.

Born May 3, 2003 in Freehold, New Jersey, Jack arrived at Georgetown on July 27, 2003 and served as its official mascot until his retirement in 2013. He was the second mascot since the university tradition of keeping a live bulldog was revived in 1999.

Over the past 12 years, Jack lived with Fr. Christopher Steck, S.J. on the fourth floor of New South Hall. Steck described Jack’s unifying presence on campus.

“I’ve been touched by how one dog can elicit the affection of such a diverse group of people — diverse not only in regard to their status in the Georgetown community (students, alumni, faculty, staff administrators), but also diverse in personality type and disposition,” Steck wrote in an email to The Hoya. “Being such a source of affective unity for so many different people is the key contribution which a mascot makes, and bulldogs seem particularly able to do it well, with their endearing expressions and entertaining mannerisms.”

Throughout his decade-long tenure, Jack performed at basketball games and other university events, most famously eating boxes branded with logos of opposing teams. Steck added that Jack loved the attention of performing for students, especially at the Verizon Center.

Jack’s affinity for the spotlight was one of his defining qualities, noted by numerous students, including former member of the Jack Crew, the group of students who helped care for the mascot, Victoria Glock-Molloy (COL ’11, GRD ’13).

“Jack always seemed to love his job as mascot,” Glock-Molloy wrote. “He was excited at the sight of any car pulling up, always with the hope that it was there to take him to the Verizon Center. He had his game day act perfected, always so calm and patient even when surrounded by huge crowds of screaming basketball fans.”

Glock-Molloy described how her favorite memory from Georgetown was with Jack at a home basketball game in 2011. Former President Bill Clinton (SFS ’68) was in attendance and met Jack in the Verizon Center that day.

“He spotted Jack, got down on all fours, and started rough-housing with the dog and scratching his ears. ‘I love dogs. You can tell I have a dog,’ said President Bill Clinton, mostly to Jack,” Glock-Molloy wrote. “And there was Jack. Diva as always. Completely unaware that he had drooled on a major world leader, but very appreciative of the back scratch.”

Steck described several of Jack’s quirks other than his signature trick of eating boxes, including his stubbornness and unique loves of water bottles and golf carts.

“He loved drinking out of water bottles, and mostly refused to drink out of a bowl,” Steck wrote. “He loved golf cart rides. If someone in a golf cart stopped to talk to me, he’d assumed they stopped for him, and would jump up in it.”

After suffering an injury to the canine equivalent of the anterior cruciate ligament in 2012, Jack was no longer able to attend basketball games and officially retired from his mascot duties in 2013.

Even in retirement, Jack was visible on campus, spending his days in New South or receiving visitors in the lobby of Wolfington Hall.

“He just liked laying on the couch next to me getting his face massaged and ears scratched,” Steck wrote.

Although his days performing at the Verizon Center were behind him, Jack continued to affect the Georgetown community through his love for students and his sociable disposition.

Randy Puno (COL ’16), a member of Club Filipino, described a fond memory when Jack stumbled upon one of the club’s meetings in the Healey Family Student Center last fall and decided he would end his walk there and stay with the students.

“As hard as Fr. Steck tried to yank Jack away from his fans, Jack stood his ground and simply wouldn’t leave. So we went on with our board meeting — with the addition of Jack, who became CF’s honorary board member for the day. In the end, that’s what defined Jack’s time at Georgetown. He pretty much did what he loved most: spending time with the Hoyas who just couldn’t get enough of him,” Puno wrote in an email to The Hoya.

Justin Fang (SFS ’17) described another recent Jack memory from the mascot’s retirement when he was moving out of New South Hall, after living for a year as Jack’s neighbor as the resident assistant on the fourth floor.

“I was dragging my suitcases to the elevator and he was lying down in the common room. As I waited for the elevator, Jack came out and sort of stood there as if he was waiting for me to say goodbye. He didn’t leave until the doors had shut. Miss that little guy,” Fang wrote in an email to The Hoya.

Glock-Molloy also emphasized how widespread Jack’s influence was in his 12 years on campus.

“Everyone has a Jack story. Whether they left out a cardboard box while moving out of their New South dorm room, or they caught sight of him while he romped through the snow, or if they were lucky enough to experience all sorts of his antics as a member of Jack Crew, having a bulldog story was a shared part of Georgetown,” Glock-Molloy wrote.

Jack Jr. succeeded Jack Sr. as mascot in 2013 but was dismissed in August 2013. Current mascot John B. Carroll has served as the official university mascot since his arrival in October 2013.

Adam Ramadan (COL ’14), another former Jack Crew member, said he hopes the tradition of having a live bulldog mascot on campus continues far into the future, pointing out Jack Sr.’s legacy.

“I think the importance of the live bulldog tradition, with the joy and the sorrow and the outpouring of support for this Jack, shows how important it is that we continue this tradition going forward,” Ramadan said. “The university, students and the administration came together to find a way to keep this going and, fingers crossed, it’s a tradition that lives for a long time.”