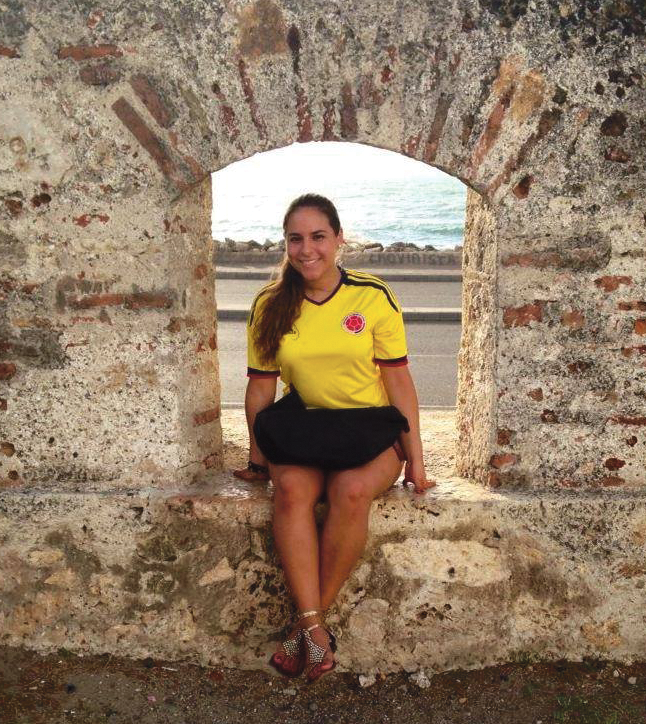 Andrea Jaime (NHS ’17) brought her focus and passion to her studies of health sciences, her desire to help others and her friendships.

A human science major who dreamed of one day becoming a doctor in the Army, Jaime died from a case of bacterial meningitis on Tuesday at MedStar Georgetown University Hospital. She was 19.

“We wish to express our gratitude to the many people who have sent their thoughts and prayers to us during this time of tragedy and despair for our family,” Jaime’s family wrote in a statement released through the university Thursday. “Andrea was a blessing to our lives and will forever live in our hearts.”

Jaime was born in Bogota, Colombia, and graduated from Coral Gables Senior High School in Miami, Fla., in 2013. In addition to her studies in the School of Nursing and Health Studies at Georgetown, Jaime had completed training for the Georgetown Emergency Response Medical Service last semester and passed her REMT test and GERMS practical exam. She was offered a position at the Glen Echo Fire Station in Bethesda, Md., with training set to begin this week.

According to her friend Lena Snow (NHS ’17), Jaime was passionate from a young age about helping others and practicing medicine.

“It was her passion since she was a little girl, it’s what she wanted to do. I just think it’s really incredible how much she knew that at such a young age, that that was her calling,” Snow said. “She totally had the personality for it. … She would have been an incredible doctor. She would have been able to get the information out of the patient effectively and politely, and I can just totally see her in medicine. It’s just really unfortunate because she would have helped so many people.”

“She really cared about the people around her, and I have no doubt that she would have been an amazing doctor,” Skakel said.
Jaime was fascinated with medicine and often spent time studying independently, according to friend and classmate Marjia Jannati (NHS ’17).

“She loved anything health-related,” Jannati said. “Even when we were studying in [Regents Hall] really late, she’d tell me that she’d sometimes watch surgeries or sometimes watch strange case studies shows and medical shows. She was really into helping people, and she couldn’t wait to get out and start helping people.”

Jaime was a member of the Georgetown University Grilling Society and the Georgetown Scholarship Program, and was interested in joining Hearts for Heroes, an organization that provides financial and spiritual assistance to returning veterans. She participated in Community Scholars, a five-week academic summer program for incoming freshmen, and was a Gates Millenium Scholarship recipient.

Jaime also loved to exercise, and was on the varsity soccer and varsity volleyball teams in high school. At Georgetown, she particularly enjoyed running with friends.

Jannati said that Jaime was always there to motivate her while they worked out together.

“She’s very energetic, she is a hard worker,” Jannati said. “She would always say, ‘You can’t slack off.’ We had a plan to work out, to study, to get things done or go to Yates. If she makes a plan, we’re going to do it. She was always determined and she always had goals in mind and she followed through.”

Jannati recalled the regular runs that she would take with Jaime to the monuments.

“Every time we got there, toward the end, I’d say, ‘I’m tired. Can we slow down and walk this part?’ For her, it was like, ‘No.’ She’d run the hardest in the last 10 minutes,” Jannati said. “I think that sums her up a little bit because she always pushed hard at the end. It didn’t matter if she was tired, she still pushed on.”

Mansi Vohra (NHS ’17), another close friend, said she remembers a moment she shared with Jaime on a particularly scenic run on a trail along the Potomac.

“It was one of the most beautiful trails I have ever been on. … Just like being there with her, and taking it in, and going on an amazing run, that will always be my favorite memory because it was just such a beautiful trail with such a beautiful person,” Vohra said. “I’m probably going to go running there again just to remember her.”

According to Vohra, Jaime’s dedicated, hardworking attitude was present in both her social and academic life.

“She was such a hard worker, because she just pushed herself when she went to the gym, pushed herself in the classroom,” Vohra said. “She had a goal of being a doctor, and nothing brought that goal down. Not a bad grade, nothing.”

In addition to being a hardworking and focused student, Jaime is remembered as bubbly and optimistic, even when it came to her rigorous course load.

“Her closest friends will remember her as someone who was honest and forward, but with such a humor that you were guaranteed endless laughter when you were with her,” Sandra Martinez (NHS ’17), a friend of Jaime, wrote in an email. “She was someone who knew how to have fun, whether that was at a Saturday night party or a Saturday night in Lau.”

Jaime became close friends with her peer adviser in the NHS Madhav Paul (NHS ’16), who noted her enthusiasm and her infectious laugh.

“In the NHS, we pride ourselves on being so small and being such a small community. I think the majority of the 2017 class of the NHS was at that vigil,” Snow said. “We were all there for each other. In our classes, there’s definitely a somber mood.”

Those close to Jaime stressed that the memory of their friend will live on with them.

“I will not say, ‘She was loved.’ She is loved, because the love of her friends and family has not diminished because she is gone,” Martinez wrote. “It is still present and will remain with us.”