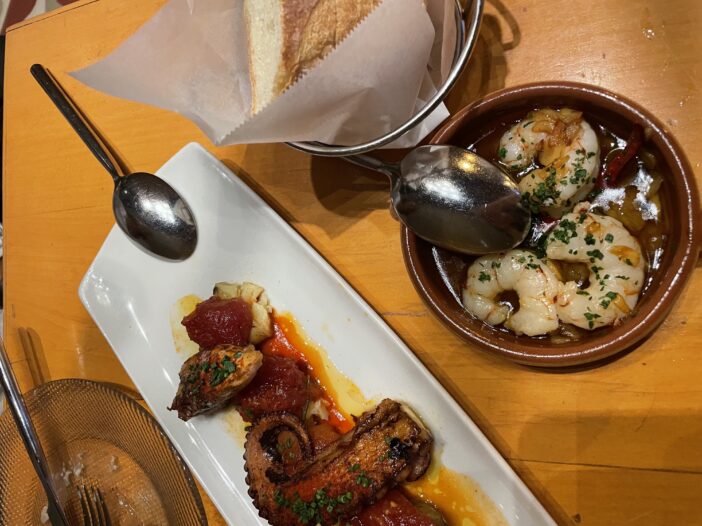 José Andrés, chef, restaurateur and world-famous founder of nonprofit World Central Kitchen, had to have his start somewhere — 480 7th St NW, Washington, D.C. is home to his first restaurant, Jaleo. With unconventional dishes that burst with flavor and texture, this restaurant offers a fresh culinary experience and reveals a new side to classic Spanish tapas.

Although this Spanish restaurant was Andres’s first initiative as a young chef, it is arguably one of his most successful restaurant models, having been enjoyed by numerous tourists and Washingtonians since it opened in 1993. It now has extensions in Maryland and Las Vegas, allowing people from all over the United States to enjoy authentic Spanish cuisine.

As a native of Spain who spent her childhood in Madrid, I had high expectations as I stepped through the restaurant’s tall glass doors.

Soon after being handed the menus, General Manager Javier Pérez made an appearance at our table, introducing himself and making me feel at home with our shared memories of Spain.

After looking through the comprehensive menu, I decided to order “José’s Way,” one of the chef’s tasting menus that served over 10 samples of tasty culinary Spanish tapas. The first dish brought to my table was reconstructed liquid olives, a dish I had never seen in Spain.

The waitress described this culinary innovation as olive juice that had gone through a modern spherification process to resemble a real olive. José Andrés had learned this technique when he worked with Chef Ferran Adrià as a 21-year-old at the famous restaurant El Bulli in Spain. Just as the waitress described, the olive melted in my mouth with its savory flavor.

The later seafood dishes were the highlight of the night, with a broad selection of famous tapas that impressed both myself and my American friend. Crab salad with relish and salsa rosa, oysters with mustard garlic sauce and cod fritters with honey aioli all blew away my expectations for a Spanish restaurant in the United States.

Each dish was exquisitely seasoned and cooked to the perfect temperature, a technique that Andrés is famous for. My favorite tapa was the classic buñuelos de bacalao, otherwise known as cod fritters: crispy on the outside, filled with a flavorful cod center and drizzled with a sweet yet salty honey aioli drizzle, these will surely not disappoint.

The meat dishes on the tasting menu included croquetas de pollo, pork shoulder, jamón serrano over tomato bread and olive oil and lamb served with rosemary, mashed potatoes and sauteed button mushrooms in a garlic and white wine sauce that all tasted amazing.

Each of these was elegantly plated and most importantly, packed with authentic Spanish flavor. I appreciated that the waitress took time to carefully describe each dish, allowing me to fully understand and savor what I was putting in my mouth.

The night ended with flan, a well-known Spanish custard with Catalan cream, as well as olive oil ice cream with grapefruit. Flan is not easy to master, even for Spanish natives, so I was delighted when I bit into a perfectly buoyant yet not overly sweet dessert.

I had never tried olive oil ice cream before, but its savory flavor ended up being a hit. We enjoyed these desserts alongside warm cappuccinos, which allowed me to fully relive the Spanish tradition of finishing a meal with coffee.

The bustling, lively ambiance of Jaleo paired with the fantastic service and delicious dishes make it a one-of-a-kind dining experience. My only complaint is that I would have liked to see more classic Spanish tapas in the tasting menu rather than so many new and experimental dishes, even though most of them were equally as tasty. Despite the expensive prices, I would definitely return to this restaurant for special occasions and recommend it to friends and family alike.