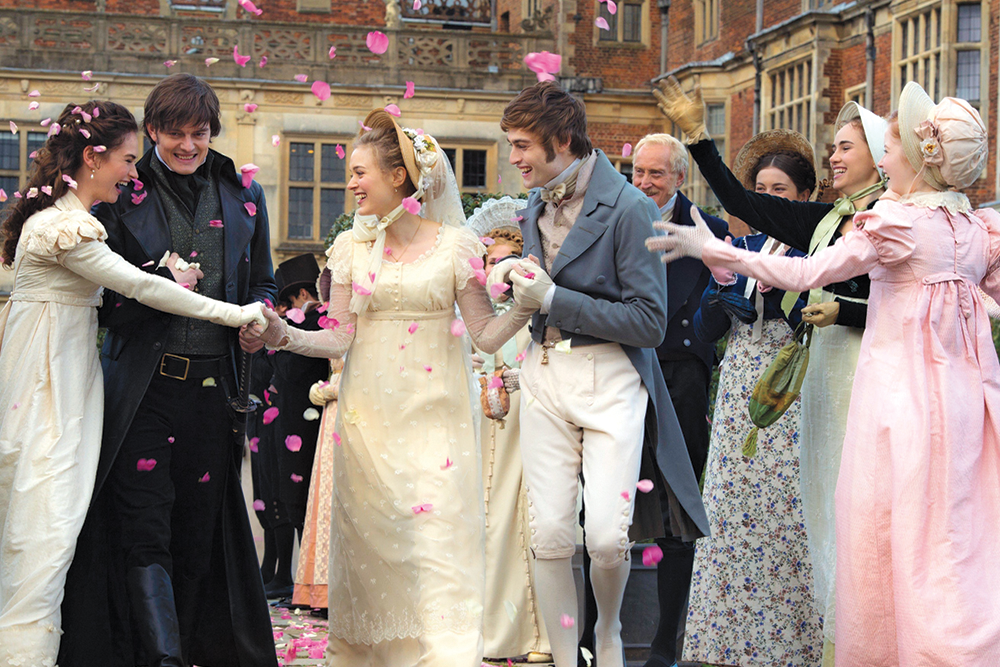 Jane Austen’s famous opening to the 1813 novel “Pride and Prejudice” asserts that “it is a truth universally acknowledged, that a single man in possession of a good fortune, must be in want of a wife.” However, when the malevolent undead are thrown into the mix, that wife better come with her own otherworldly slaying abilities. “Pride and Prejudice and Zombies,” based on Seth Grahame-Smith’s 2009 New York Times bestseller of the same name and appearing in theaters nationwide Feb. 5, introduces the characters of Austen’s classic tale to an imposing army of zombies.

Written and directed by Burr Steers, who is known for his collaboration with Zac Efron in “17 Again” and “Charlie St. Cloud,” the film stars Lily James as Elizabeth Bennet and Sam Riley as her love interest Mr. Darcy. While some might question the unorthodox mixture of zombies and British literature, the film’s cast revealed its enthusiasm toward Steer’s unification of the seemingly disparate worlds in a conference call with The Hoya and other members of the media last Friday.

James said that while she was initially unsure of the story after seeing its rather preposterous title, she was impressed by the intricacies of the script and how it complemented Austen’s original story.

“I thought it sounded terrible and then I read it and I thought it was wonderful,” James said. “We all found that by placing something so surreal as zombies in ‘Pride and Prejudice,’ somehow it is as if the scenes and relationships in the book become heightened [and] become really clear.”

“Pride and Prejudice and Zombies” takes place in 19th century Britain, where a mysterious plague is bringing the dead back to life. Bennet, a master of martial arts and weaponry, teams up with Mr. Darcy on the battlefield to fight the forces of evil as they discover their love for one another.

Grahame-Smith is also known for writing “Abraham Lincoln: Vampire Hunter,” published in 2010 and later adapted as a feature film starring Benjamin Walker in 2012. The novel and film revolve around President Lincoln’s discovery of a vampire plot to take over the United States and his mission to destroy them.

James said that while the romantic relationships between the characters remain true to the original text, the addition of zombies allows for some interesting new dynamics.

“Mrs. Bennet gets to beat the crap out of Darcy, which is really a physical representation of that sexual frustration,” James said. “So much was done in the story, the plot [and] the circumstances that … my Mrs. Bennet is actually much angrier [and] much fiercer. She manifests what she feels more; she can’t hide it as much as in the original.”

Heathcote said that while the film isn’t quite as impactful or grand as Austen’s novel, it makes up for it in pure fun.

“It’s like Austen but with a little less nutritional value,” Heathcote said. “More candy on top.”

Smith, who plays clergyman and heir to the Bennet estate Mr. Collins, said that Steers used the inclusion of zombies to expand the story’s creativity and energy.

“The stakes suddenly become infinitely more interesting,” Smith said. “Because there are zombies in the film, it allows you to make bold choices because the universe is slightly heightened.”

This is Steers’ first feature film since 2010’s “Charlie St. Cloud” and his first directing work of any kind since an episode of “The New Normal” in 2012. Steers, who was named for his ancestor Aaron Burr, the vice president who famously dueled with Alexander Hamilton, is not the only writer in his family to work in both history and fiction. His uncle, Gore Vidal, wrote historical accounts such as “Burr” alongside more radical novels like “Myra Breckenridge.”

Booth, in the role of Mr. Bingley, said that having zombies allowed Steers to emphasize the differences and nuances of the story’s many characters.