In 1838, Thomas Mulledy and the Maryland Jesuits sold 272 slaves, in part to pay building debts at the schools they had established, including Georgetown. But what would happen next?

The sale came following a growing discontent referenced in “Georgetown, Financed by Slave Trading” The Hoya, A3, Sept. 26, 2014]. The Jesuits, however, had a plan, Before they agreed to sell the slaves, they formulated a list of conditions.

These men believed they could produce a set of circumstances that would soften slavery and make something humane from our least humane institution. These conditions governed how, when and to whom the Jesuits would sell their slaves. But it was an impossible task; slavery could not be de-fanged, and even if it could, the Jesuits were too irresolute to do it.

What conditions did they put forth? First, the slaves were “not to be sold except to proprietors of plantations.” It was a simple enough condition to keep; they sold the slaves to Henry Johnson and Jesse Batey of Louisiana.

Second, the Jesuits decreed, “it must be stipulated in the sale, that the Negroes have the advantage of practicing their religion, and the assistance of a priest.” Like many slavers, the Jesuits used Christianization as a rationale for slavery. They believed they could make the slaves moral and better off. One wrote: “If these unhappy people had good masters, they would then be in a comfortable situation. They would be saved from a habit of indolence.”

Nevertheless, the Jesuits failed to implement their paternalistic impulse. Writing in 1848, Fr. Van de Velde, S.J., asked that the Maryland Society of Jesus provide $1,000 to construct a church on Henry Johnson’s Louisiana plantation. The slaves, he complained, had been “abandoned.”

But Van de Velde did not seem convinced he would succeed. “If I am annoying you,” he wrote, “I am certain that you will pardon me for it.” Gadfly as he was, Van de Velde had already written three other letters requesting funds. There is no reason to believe Maryland Province fulfilled his request.

Third, they stipulated that, “husbands and wives be not at all separated, and children not from their parents.” But, in letters to the Jesuit superior general, the archbishop of Baltimore Samuel Eccleston levelled the damning accusation that indeed the families of slaves had been separated.

Fifth, it was insisted that, “those who cannot be sold or transported on account of old age or incurable diseases be provided for as justice and charity demands.” Even so, at least 17of the slaves penned onto ships to make the sweltering voyage to Louisiana were over the age of 60. One slave — Daniel — was even 80 years old.

Of the five conditions the Jesuits set forth for the sale, only one was upheld  — hardly a record of success. Their failure reflects the unrealistic expectations they held about slavery.

Many of them wrongly understood slavery as a type of ministry, and did not recognize it as an oppressive system of ownership. In addition, many of them drew distinctions between the international slave trade and domestic slave ownership; we now recognize that distinction as facile.

An 1843 letter from Baltimore captures this sentiment. It warns Catholics to not, “misconstrue the Pope’s denunciation of the African slave trade into a denial of the compatibility of domestic slavery as existing in this country.” One could be an upright Catholic and still own slaves, or so they believed.

But life after the sale was never what they promised. The slaves Georgetown sold probably had lives very similar to those lived by other slaves in the Deep South, though there is little concrete proof of the matter.

Undoubtedly, they faced long hours of work, separation from their families, horrific forms of discipline and many years of exploitation. Many of them may have resisted. Many of them probably achieved their freedom. And many of them probably died slaves, victims of an institution whose evils Georgetown and the Maryland Jesuits never fully understood — of that fact at least, we can be certain. 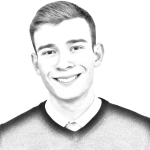 Matthew Quallen is a junior in the School of Foreign Service. Hoya Historian  appears every other Friday.