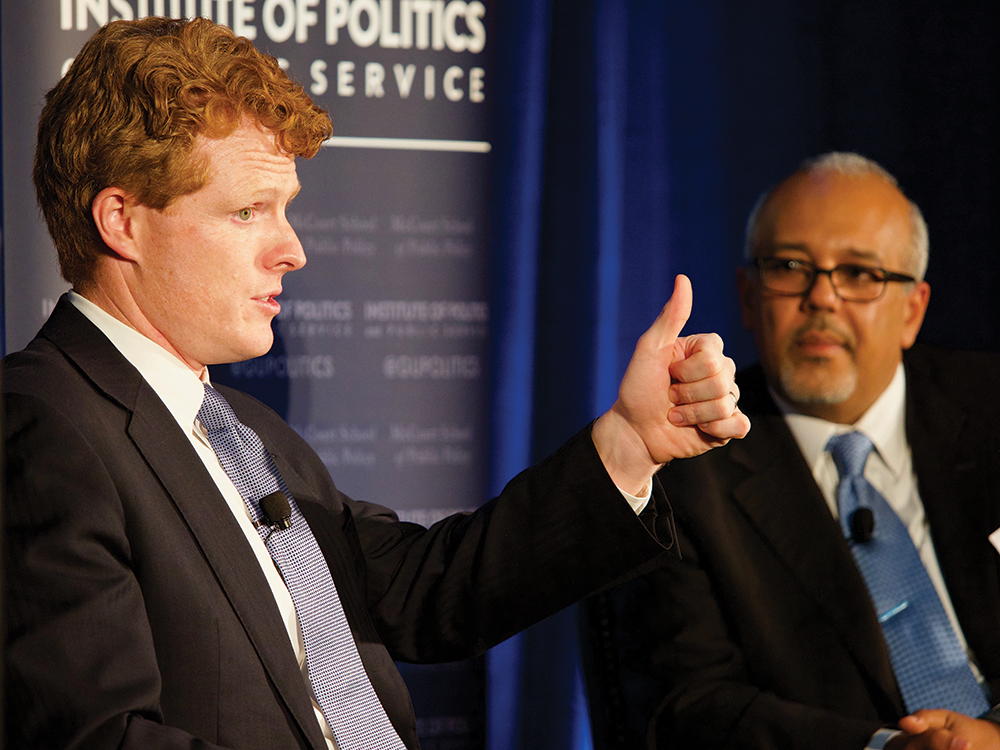 Kennedy is a third-term congressman representing the 4th District of Massachusetts who delivered the Democratic Party’s response to the State of the Union this year. Prior to being elected in 2012, Kennedy served as an assistant district attorney in Massachusetts. He is now a member of the House Energy and Commerce Committee.

Though optimistic about the prospect of collaborating in the future with Republican lawmakers, Kennedy said that U.S. democracy currently needs repairing.

Kennedy attributed this damage to politicians’ divisive tactics that focus on contentious issues to maintain political relevance, rather than creating productive dialogue.

The United States needs to acknowledge and embrace the diversity that exists within its borders in order to establish a more cohesive nation, Kennedy said.

Neglecting to protect any religious, ethnic, national or other identity groups contradicts civil rights law and marginalizes members of those groups, Kennedy said.

“If you start to say, ‘Well this is just too hard, or there’s not that many of you, you’re a small minority, or to do this is going to be too expensive to actually make sure we take care of X group or Y incivility or some small racial ethnic group,’ you actually are saying that you don’t count, that you are not seen,” Kennedy said.

“Of all of the lessons from Tuesday night, the issue that had the best night was health care,” he said.

Republicans and Democrats, though hostile to each other on many fronts, share a vision of affordable health care for U.S. citizens, according to Kennedy.

“If the basic promise that we should be able to make as the most powerful nation in the world is that every person gets access to health care when you need at a price that you can afford, we can do that, and I don’t think many of our Republican colleagues would actually disagree,” he said.

Health care is one of four issue areas, including infrastructure, pensions and mental health, that Congress should strive to address, according to Kennedy. Republicans want to work with Democrats to tackle these issues, and they are especially willing to develop better mental health care policies, he said.

“There is not a Republican I have met and discussed this issue that doesn’t say, ‘Hey I’d love to help,’” he said.

Bipartisan agreement may exist on issues like infrastructure and mental health, but deep political divisions, which are symptomatic of larger cultural fractures, undermine cooperation in U.S. politics today, Kennedy said.

“A number of the biggest issues out there, whether it’s immigration, whether it’s gun violence, whether it’s health care to some extent — those issues are framed as policy questions, but what they actually are is a … cultural divide,” he said. “It ends up being a question of, is one side of, one aspect of, one slice of America trying to impose its values, vision, way of life on somebody else.”

The newly elected Democratic House of Representatives should focus on expanding oversight of the executive branch, including following up with federal agencies to ensure that they are properly enforcing laws already passed by Congress, Kennedy said.

“Just because you have an administration that has blocked all convention about compliance with the law and oversight doesn’t mean they get a pass just because they don’t want to do it,” Kennedy said.

President Donald Trump should release his tax returns to the House Oversight and Government Reform Committee to ensure that he is not engaged in illegal activity, including dealing with foreign agents, Kennedy said.

“Every president in recent history released their tax returns; you decided not to. You said you would and then you didn’t,” Kennedy said. “So yeah, I think we should get the tax returns, and just because you don’t want to release it doesn’t mean that you just say, ‘OK that’s fine; we’re not going to do that.’ No, those are out there to ensure that every single president and administration abides by the same set of rules and that you are not engage in self-dealing.”

The Trump administration likely engaged in illegal behaviors, according to Kennedy.

“Let me be clear, I hope there is nothing there,” he said. “I hope Mr. Mueller comes back tomorrow and says, ‘Case closed. There’s nothing else to do; all set, all good.’ I don’t think he’s going to do that.”

Kennedy said he looks forward to the next two years with a Democratic majority in the House of Representatives, which had been previously dominated by Republicans since 2010.

“I have never spent a day in the majority, and I’m very much looking forward to it.”