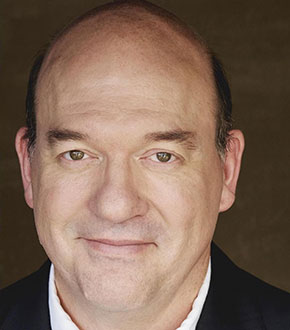 Of the many Hollywood actors who have turned to directorial roles over the course of their careers, few have had as celebrated an acting career as John Carroll Lynch. Lynch, best known for his acting roles in the films “Fargo,” “Shutter Island,” and “The Founder” and television show “American Horror Story,” will make his highly anticipated directorial debut Oct. 6 with the premiere of “Lucky.” The film, written by Logan Sparks and Drago Sumonia, stars Harry Dean Stanton in the eponymous role, David Lynch and Ed Begley Jr.

The film follows the life of a 90-year-old atheist named Lucky as he grapples with aging and the frustrating imminence of death. The 88-minute film reflects on mortality and the importance of relationships as it follows Lucky’s lonely existence in a small desert town. Lynch sat down with The Hoya to discuss the relationship between Stanton and Lucky, the casting process, his hopes for the film and his plans for the future.

Since Harry Dean Stanton passed away Sept. 15, his role in “Lucky” is truly memorializing and will likely make his name known to many in the generations too young to witness his incredible film career. “Lucky” is described as a tribute to Harry’s life and is somewhat biographical, but I have read that Harry did not think that the character truly represented him. What are your thoughts on the relationship between Harry and the character of Lucky?

Harry was insistent that he only played Harry Dean Stanton — it was very important to him. So, the idea that he thought this role wasn’t representative of him is kind of a funny discord. There were a lot of things about the character that obviously weren’t about Harry, but it was based fully on what the writers felt was essentially him. In a way, if you wanted to really drill down on it, it would be that Lucky is what Logan and Drago thought of Harry, and that that’s who he was playing — he was playing their impression of him.

I know that the script was written with Harry Dean Stanton in mind — was that was a primary draw for you? Do you think you would have been as compelled to direct “Lucky” if he weren’t playing the lead?

If Harry weren’t playing [Lucky], the movie never would have been done. That was a committed choice. If we, for example, hadn’t been able to raise the money before he died, I wouldn’t be interested in doing it, and Logan and Drago wouldn’t have been interested in doing it. It would’ve been weird to offer Lucky to just anybody. We could’ve done it, but it wouldn’t have felt right. We didn’t have to, gratefully, because he said yes — which was not always a fait accompli.

David Lynch and Ed Begley were also written into the film, but for the rest of the supporting characters, what was the casting process like? Since this movie was, in your words, a “love letter” to Harry Dean Stanton, and the cast was fairly small, were you looking for actors that were eager to contribute to celebrating his life?

I do know that one of the primary draws was to work with Harry Dean Stanton — it was for me when I was going to act in it. [John Carroll Lynch was in consideration for playing Barry Shabaka Henley’s role of Joe.] There was always that draw for actors, because he’s actor-bait.

David’s wasn’t written for him, but Harry suggested David, and we all agreed; we thought it was a really good fit. Ed was on board to begin with. My heart breaks for Ed right now; him and Harry were so close. Ed talked to him every day for years and they saw each other a lot, so it must be really hard for him to lose his friend.

You almost acted in the film yourself — what made you decide not to?

I had plenty on my plate and there was no purpose in it. If we had needed money and my name had meant something; if it had been a part that was compelling enough for me that I absolutely had to do it, I probably would have. I loved Joe, I would’ve been happy to play Joe, but I didn’t need to play Joe. And I had Barry!

I also thought of the depth and the density of the town. When you’re casting, you’re thinking about a world you’re creating. I wanted the material to have a sense of the world that I look at every day, where there are people from all over the world. Barry was able to do it, and he’s a wonderful actor.

Now that you’ve had a go at directing, what does the future look like for you? Do you plan to continue directing, switch back to acting or do both?

I don’t foresee a circumstance where I wouldn’t want to act — I love it too much. That being said, I definitely want to continue directing. I don’t know exactly how, but something will come about, and hopefully this movie will help that happen.

One of the best things about making this movie was that Harry gave such a great performance. It’s great to see the outpouring of love and respect that people have for him. I always knew that people in the acting community loved him, but it’s so amazing how many lives he touched that have never even thought about storytelling. The reaction to film is a really a moving tribute to how many people he’s touched in so many generations.

“Lucky” has been characterized a tribute to Harry as well as a reflection on life, death and aging. Is there a key message that you think the film is sending, or something that you hope the audience walks away with?

The movie is about the consideration of mortality, and the stakes are higher now because Harry has died. Lucky is close to the edge of mortality because of the age he is. And the fact that he doesn’t believe that anything happens next means he has to come to terms with the truth of the limited time that he has.

But my time is limited. Right now, my time is limited. So that joy that he finds, I want to find every day. I don’t want to miss it. I don’t want to waste a second of this time. You and I sitting here across the table from each other should be as vivid and powerful with joy as anything that ever happens to me. If not, I’m doing it wrong. The movie’s much more about living than it is about dying. Much more.

This interview has been edited for brevity and clarity.