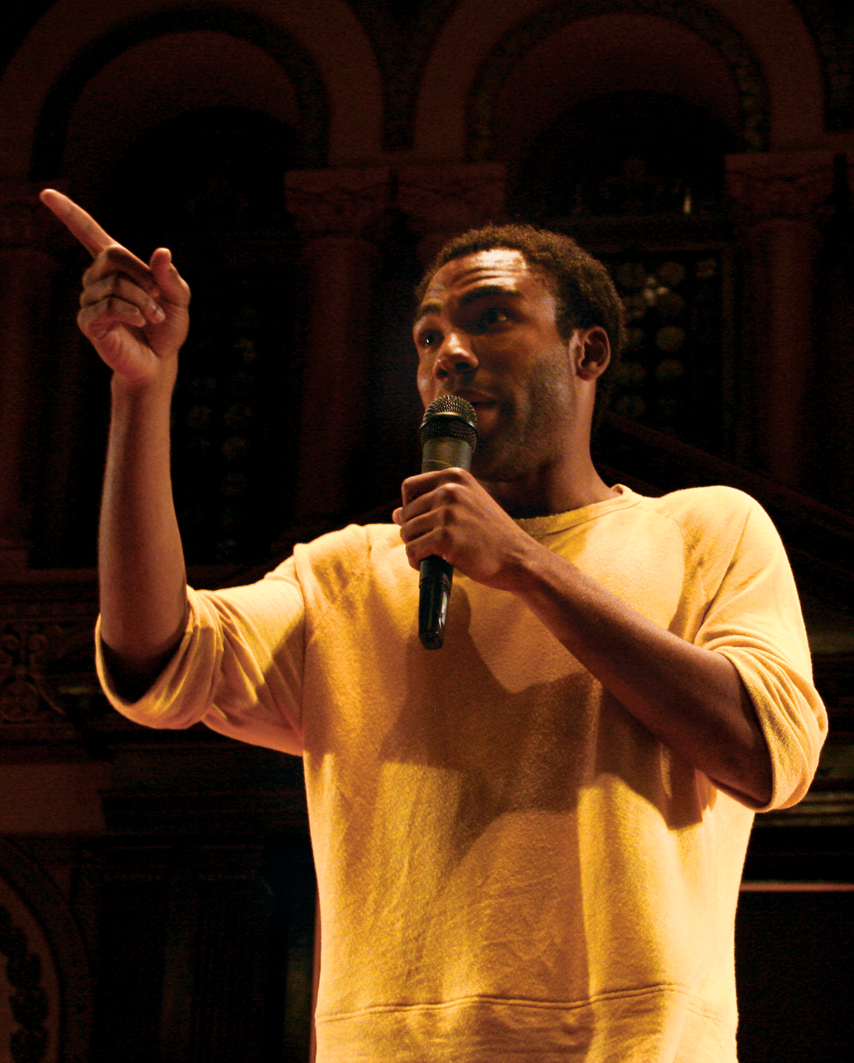 What the crowd didn’t know was that portions of Glover’s repertoire may not have been completely original.

In at least three instances during his Sept. 7 set, Glover made jokes reminiscent of bits done in past years by comedians Chris Rock and Patrice O’Neal.

Glover, who is best known for his role on the NBC series “Community,” made a contractual stipulation with the Georgetown Program Board that no audio or video could be recorded at the performance. Several attendees, however, were able to corroborate the content of his jokes.

One of the lines Glover delivered, a joke that has also has appeared on the website “College Humor,” goes: “When a girl leaves my home at eight and hasn’t called by 10 … I immediately think of ways to prove I didn’t kill her … like I go downstairs and buy like a bunch of tampons and I’m like ‘remember this face, [expletive],’ and I run out.”

On “Comedy Central Presents” in 2003, comic Patrice O’Neal said, “I never go more than a half an hour without buying something, cause you could kill somebody in a half hour and you need an alibi. So every 15 minutes I buy something … I’ll end up arguing with the clerk just so he remembers me.”

On the YouTube page for Glover’s video, numerous viewers have posted comments about its similarity to O’Neal’s routine.

In another bit at Georgetown, Glover made a joke that numerous members of the audience recall as, “White people never say [expletive] around black people, but I was at a Kanye West concert, and basically everyone in the crowd was white. Kanye was singing ‘All of the Lights,’ and the song goes ‘Something wrong/I hold my head/M.J. Gone…’ and then the white crowd all shouted, ‘Our [expletive] dead!'”

In his 2008 HBO special “Kill the Messenger,” Chris Rock joked, “There’s a lot of [expletive] in a Dr.Dre song, and white people want to enjoy it, but they can’t really enjoy it around me. So they start taking out the [expletive] or mumbling the [expletive], and it’s just a sad sight to see. But I know when I’m not there … They all sing along together ’cause I never hesitate to put a [expletive] on his back.'”

In another joke during the Gaston Hall show, Glover discussed how it is impossible to think about racism if it was propagated by babies. Glover joked that if he saw a baby dressed in Ku Klux Klan garb, he would still want to hug and fawn over him.

In 1989, Chris Rock said at a comedy club performance, “One thing I learned about racism is that everybody loves babies. You can’t hate a baby, man. I remember I was pushing my little brother [in a stroller] on the sidewalk in South Carolina, and these rednecks were standing there. I’m pushing him, and when I get up to the corner this redneck looks over and says, ‘Boy, that’s a pretty [expletive].'”

During a show on Comedy Central last year, Glover remarked that he idolized Chris Rock growing up and would often imitate his jokes as a child.

Nehemiah Markos (COL ’14), a member of the Georgetown Improv Association who performed as an opening stand-up act for Glover, defended the originality of Glover’s material, adding that proving joke theft is difficult.

“The line between homage and theft is thin, and sometimes you can’t tell if a comedian is being influenced by someone or if he is actually stealing their jokes,” he said.

In the world of stand-up comedy, stealing jokes has drawn criticism. Several high-profile comedians such as Dane Cook, the Wayans Brothers and Carlos Mencia have been accused of recycling jokes from other comics’ sets for their own routines.