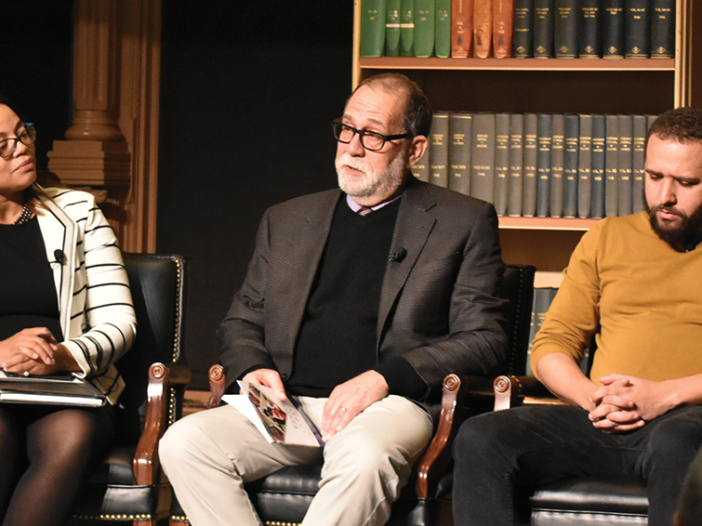 Effective journalism can encourage activists to address ongoing racial profiling and violence against the black community in the face of continued police brutality, panelists said in a Dec. 4 event.

The event, titled “Before Ferguson, Beyond Ferguson,” was hosted by the Berkley Center for Religion, Peace and World Affairs in Riggs Memorial Library. At the panel, three panelists discussed the implications of reporters’ coverage of unrest in Ferguson, Mo., after a white police officer killed unarmed black teenager Michael Brown in 2014.

More proactive journalism about police violence and racial profiling has enabled activists to organize against the injustice, according to Pulitzer Prize-winning journalist Wesley Lowery, who covered the 2014 events in Ferguson for The Washington Post.

“Our ability for us to so quickly see and hear about what’s happening across the country has allowed them to turn their outrage and anger and apply it directly to try and influence change in the places where they are,” Lowery said.

Panelist Teddy Washington made national headlines after he and nine friends were pulled over by police after leaving a restaurant in Clayton, Mo. — which is about 10 miles from Ferguson — in 2018. The officers, who had received reports of a robbery at the restaurant, forced the group to return to the restaurant, according to NPR. Washington and his friends then showed their receipts to the restaurant management, who confirmed that they were not the perpetrators.

The incident transformed Washington’s outlook on racial profiling in the United States, he said.

“I’d read statistics about how African Americans are treated in the United States, but it was strictly through statistics and books,” Washington said. “When these things happened to me, it made me question one, what I was doing as far as I was just reading these statistics, understanding how people were being affected, but I wasn’t doing any legitimate work to address these problems.”

Award-winning writer Richard Weiss has been documenting Washington’s story as a part of the “Before Ferguson, Beyond Ferguson,” project, an initiative that aims to document racial inequity in St. Louis. Weiss, the project’s executive editor, is working alongside two journalists to publish and compile 12 multimedia stories that chronicle inequality.

“They know enough that this is the town where Ferguson happened and if they did something wrong, or that the police perceive to be wrong, they could be lying dead on the street,” Weiss said.

Stories like Washington’s demonstrate that the racial profiling and police violence that transpired in Ferguson continue throughout the United States, Lowery said.

“We wanted this to be a problem that happened over there, that that place must be uniquely bad, must be uniquely wrong and it couldn’t happen where I live, in my backyard,” Lowery said. “But what became increasingly clear, over these years, that the story of Ferguson is the story of America.”

Increased public coverage of instances of brutality is changing people’s perspectives about racial profiling and police violence across the country, Lowery said.

“If you think about the demonstrations and protests after Ferguson, much of the conversation broadly was about well, ‘what is everyone so upset about; how often do these things happen; and if he did something wrong, well, won’t he get punished for this? Why don’t we just wait and see what happens?’” Lowery said. “We now collectively know a lot more about how these processes work.”