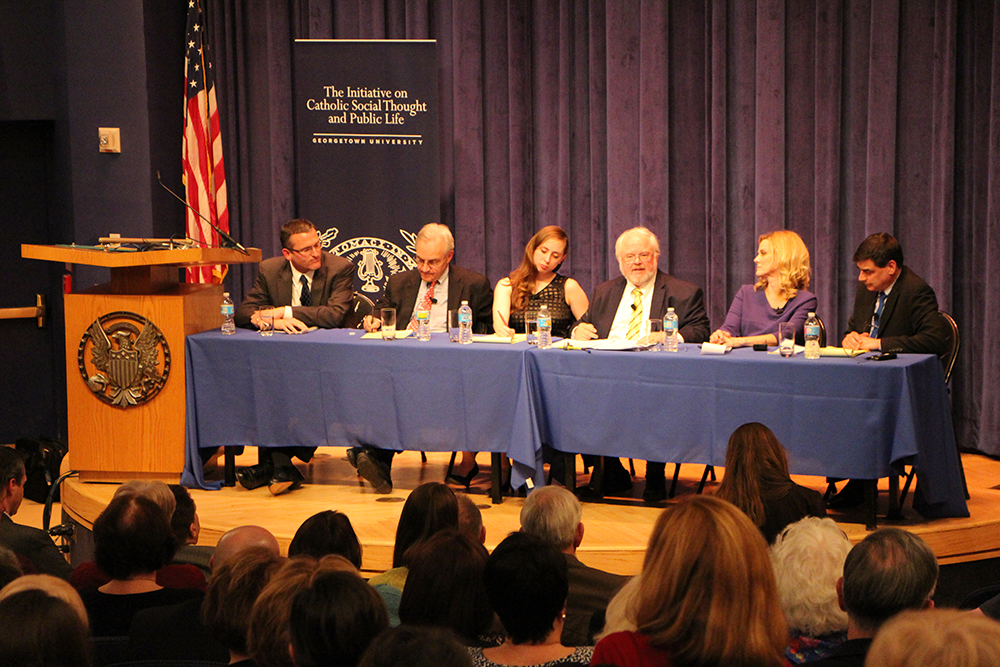 The Initiative on Catholic Social Thought and Public Life sponsored a dialogue titled “Faith, Francis and the 2016 Campaign” that featured journalist speakers in the Intercultural Center auditorium Wednesday.

John Carr, director of the Initiative on Catholic Social Thought and Public Life, which seeks to promote Catholic social teaching at Georgetown, moderated the event.

In his opening remarks, Carr described the initiative’s mission as well as its connection to Pope Francis.

“We think that Pope Francis’ strong words and humble way are the best available example of how to connect Catholic social thought and public life,” Carr said in his opening remarks. “In many ways, he is a walking, talking parable of these principles.”

Carr highlighted the importance of politics within the realm of the Catholic faith.

“Politics is a duty. It is essential, because it involves the common good. None of us can say we have nothing to do with politics, though that is a temptation, especially these days,” Carr said. “It is one of the highest forms of charity.”

“You couldn’t have predicted any of this,” Carr said. “Who would have thought that it would be a Jewish, socialist, secular Senator who would talk the most about Pope Francis?”

Green, who covers religion and public life at The Atlantic, expressed the belief that religion directly affects one’s political views.

“Not only how you self-identify, but also how much you are ingrained with your religion is an indicator of how you interact with politics,” Green said.

Smith addressed the concern and shock among evangelical leaders regarding the emerging trend of evangelical voters supporting Donald Trump over Sen. Ted Cruz (R-Tx.). Smith said this trend is perhaps a result of citizens voting for Trump without taking into account his religious views.

“Almost one-fifth of all Republican voters who say they think Donald Trump would make a good or great president, say they don’t think that he’s a particularly religious person,” Smith said.

Ashburn redirected the conversation, focusing on the strong emotions that have permeated the 2016 campaign.

Dionne, Winters and Smith each discussed the tendency of some Catholic voters to base their political preferences solely on the issue of abortion.

“The change that Pope Francis has brought about, not changing the Church’s position on abortion but making a case that abortion is not the one and only issue on which Catholics should vote, is not novel,” Dionne said.

The dialogue then shifted to the voting and religious tendencies of millennial voters, as well as the Pope’s popularity with the younger generation for his seemingly revolutionary teachings.

Green argued that Pope Francis’ ideas cannot exactly be described as new, instead highlighting the Pope’s unique style by appealing to the younger generation as well as to people across all age groups.

“People say, ‘When did the church become cool?’ This speaks to a lack of religious literacy perhaps among a certain generation,” Green said. “Popes have been saying this stuff forever.”

Winters highlighted the Pope’s ethnic background as another factor behind the Church’s increased popularity.

“The Pope is a Latino,” Winters said. “The best thing happening to the Catholic Church is not Pope Francis, it’s the influx of Latinos because we were in danger of becoming an upper-middle class club. And the Latinos are bringing us life and relationships and vitality and families.”

American University professor Shyam Chidamber, who attended the event, said he found the dialogue engaging and educational. Chidamber particularly underscored the speakers’ inclusion of information from the Pew Research Center.

“We don’t talk enough about how religious life and politics combine, and what’s behind it. Sharing some of the Pew data on how the demographics are shifting is very useful to know, you don’t hear that in the typical press stories,” Chidamber said. “It gives you a deeper perspective on what’s going on.”

“It seemed to present a picture of Catholicism that is too dictated by someone’s prior political beliefs,” Colwell said. “They used the terminology ‘conservative Catholics,’ ‘liberal Catholics,’ for me the general tone of the conversation was too focused on politics as prior to religion rather than religion prior to politics.”

Audrey Fangmeyer (NHS ’17) said she enjoyed the multitude of topics on which the speakers touched.

“I enjoyed the span of topics addressed. For me the main issue would be abortion, but also social justice,” Fangmeyer said. “And I was very happy to see them addressed in the same place.”