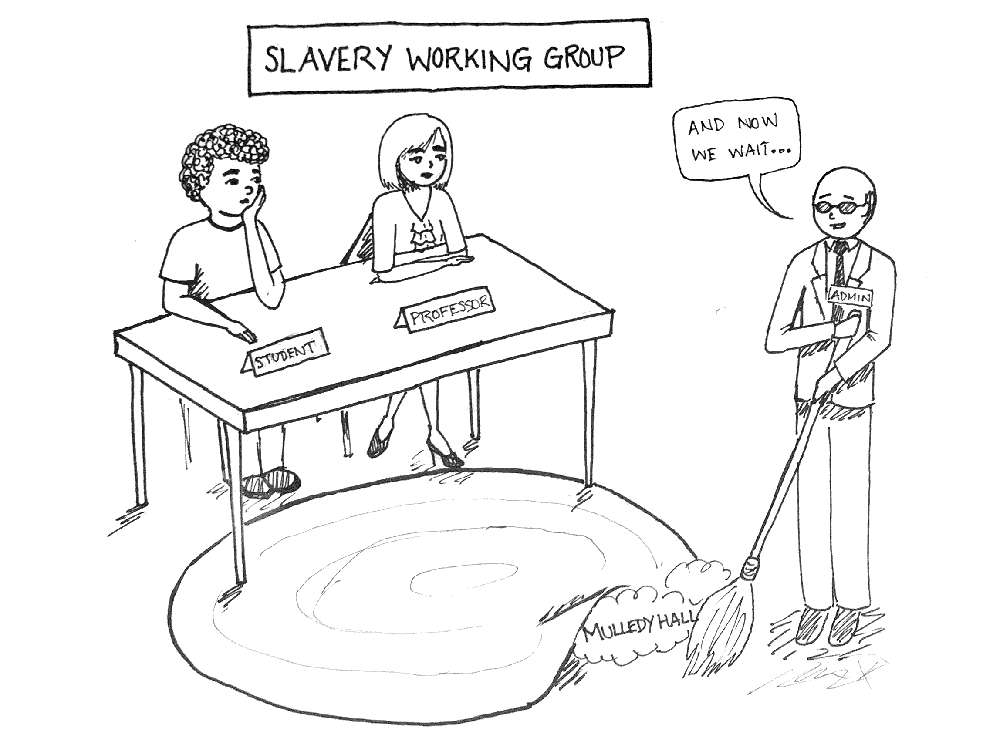 Here are a couple serious questions for the newly minted Working Group on Slavery, Memory and Reconciliation: What new information could possibly come to light on the nature of slavery that will change what we already know about Mulledy Hall? Why should changing this building’s shameful name be delayed?

Any Georgetown student who tries to do anything around campus quickly becomes familiar with the concept of a working group. During my four years at Georgetown, it was the administration’s preferred method of adjudicating roiling campus controversies. Put a few folks in a room, let a couple of years tick off the clock, put out a report and, just like that, the issue has gone away, whether it’s been solved or not. Post talk ergo propter talk, if you will.

Frankly, all things considered, that’s a fine way to handle standard procedural issues such as the availability of forks at O’Donovan Hall, the allocation of student activities fees or how many juniors, exactly, the neighbors get to require to live in Copley Crypt in next decade’s campus plan. The administration’s impulse here is understandable. Running a university is complicated and taxing. It legitimately can’t address every student (or alumni) concern and relying on working groups as a pressure-release valve seems pretty natural.

But let’s be clear: doing so on an issue of conscience like whether to memorialize a slave profiteer on every campus map and tour is a moral abomination. (If you’re new to this topic, please do read Matthew Quallen’s essential piece published in The Hoya September 26, 2015 on Mulledy the man — and the details of how he was so roundly condemned by his Jesuit contemporaries that he temporarily fled the country.)

It’s important to define what we are and aren’t talking about here. Convening a group to better consolidate and put front and center Georgetown’s troubled history on slavery and race is an important idea. It will require some scouring introspection, lots of rigorous academic work and, presumably, a couple generous alumni to fund to fruition.

But before all that (frankly, immediately), prove a commitment to the process by rechristening the building “in the heart of Georgetown’s campus” that is named for a man, supposedly of the cloth, who sold away Georgetown’s 272 slaves rather than manumit them as emancipation loomed.

And while we’re at it — at a moment when Confederate flags are coming down across the country — let’s dispense with the lazy rhetoric that renaming Mulledy Hall is “erasing” or “rewriting” history. This is silly nonsense. It would take roughly a week to put a plaque in the entryway that says, “For a long time people thought it was OK to memorialize a slave profiteer by naming this building after him. They were very wrong. Now it has a different name that, frankly, doesn’t undercut the university’s core values that we put in all the brochures.” History duly preserved.

Instead, let’s acknowledge that the concern for history and the sanctity of Georgetown’s architecture implicit in this arrangement is a little bit selective. During my four years at Georgetown, I don’t think I ever once heard someone refer to that building as Mulledy Hall in conversation. To us, it was “the old Jesuit residence,” “that building in the heart of campus that was allowed to sit vacant for more than a decade” or “the place you sneak into if you want mesothelioma.”

If I sound a bit cynical, it’s because this working group impulse is so monolithic and smothering. It’s a terrific way to give a simple problem a complicated “solution.” And, my goodness, it leads educated people to churn out word salad like “it’s more than about the name of a building. … It’s about bringing into consciousness and expanding our concrete knowledge of what happened, what the implications and significance are for that and how it should be part of our self-understanding as not just any university, but as Georgetown University” (Group to Address Slavery, Memory, The Hoya, September 29, 2015).

This is not a metaphysical issue. There is no need to call in the mystics. This is a matter of justice and basic empathy. It’s absolutely essential to tackle the hard work of reconciliation and, most importantly, to do better moving forward. But first and foremost, by God, rename the darn place.

Adam Talbot graduated from the College in 2012.