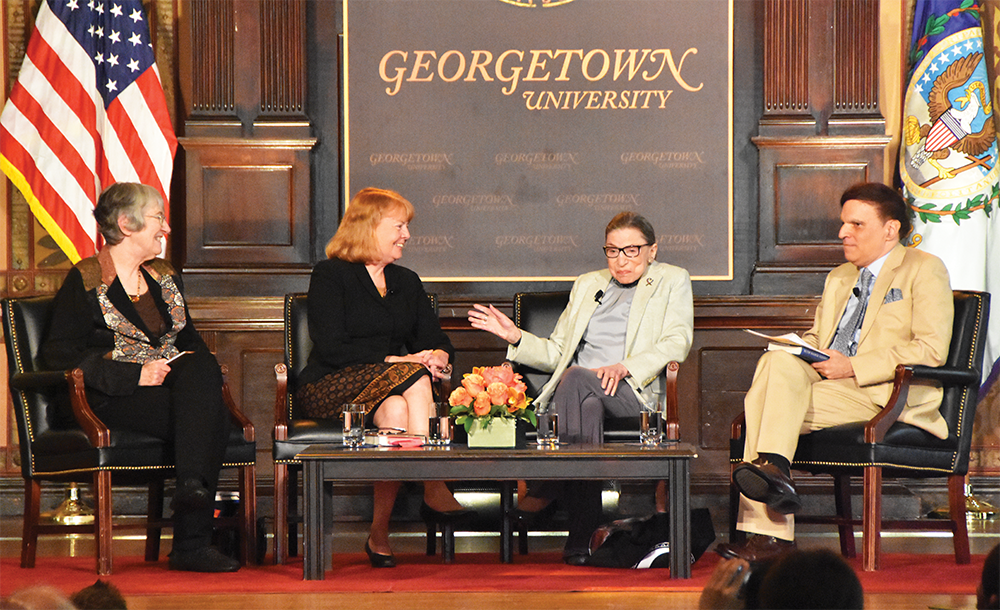 The law should not prevent women from pursuing their aspirations, said Supreme Court Justice Ruth Bader Ginsburg during a discussion in Gaston Hall yesterday.

“The challenge is more daunting than the one we faced. I spoke before about explicit gender-biased laws. What’s left, is what’s called unconscious bias. My best illustration of that is the symphony orchestra when I grew up you never saw a woman in the orchestra. The music critics thought that a violin sounded different played by a woman,” Ginsburg said. “It’s getting over that unconscious bias that remains a problem.”

Ginsburg recommended women seek allies of all genders in an effort to fight gender discrimination.

“For you, the challenge is more daunting than the one that we faced,” Ginsburg said at Georgetown on Thursday. “My advice is find allies among men as well as women who want to change things. And think of yourself … as a teacher. So don’t react in anger because that’s going to be counter-productive.”

According to Ginsburg, when she joined the Supreme Court, gender-based discrimination was not considered an issue.

“There was the woman who took care of the home and children and the man who took care of the family’s economic wellbeing. And many laws were written with that picture of the world in mind,” Ginsburg said. “So the effort was to say there’s something wrong with that picture of the world. The object was to break down all those explicit gender-based distinctions so people could be free to be you and me.”

Ginsburg, who has served more than two decades on the Supreme Court, said she believes in the power of the law to evolve as times change.

“The great thing about our constitution is that, like our society, it can evolve,” Ginsburg said.

Currently, Ginsburg is one of three women on the Supreme Court. In 1993, when she was sworn in, she was the second female justice to be confirmed, joining former Supreme Court Justice Sandra Day O’Connor, who resigned from the court in 2006.

Ginsburg said O’Connor’s departure from the court led to the most significant shift in the Supreme Court in her time on the bench.

Ginsburg said her husband Martin Ginsburg, a former GULC professor, was her biggest supporter and showed her what a partnership could look like. Ginsburg often referred to her Martin Ginsburg as a life partner, rather than husband.

“Marty was the first boy, probably the only boy, who cared that I had a brain,” Ginsburg said.

While Ginsburg’s “dissent jabot” has gained her a reputation as an avid dissenter, according to legal scholars, she said she aims to exercise that right only when necessary.

“I do not take every opportunity to dissent. I do try to save them for when it counts, when it really matters,” Ginsburg said. “I keep on my desk the unpublished opinions of Justice Brandeis. His view was his voice would be all the more compelling if he only dissented when it really mattered.”

“I would like to be thought of as a person who cares about people and does the best she can with the talents she has to make a contribution to a better world,” Ginsburg said.

The Honorable Robert A. Katzmann, chief judge for the United States Second Circuit Court of Appeals, who moderated the discussion, said Ginsburg has made enormous contributions to American society.

“Justice Ginsburg is celebrated for her impact as a judge on this country’s highest court, the second-longest member on the court, for her path marking contributions to laws’ developments, for her methodical, brilliant analyses and concise, elegant prose,” Katzmann said.