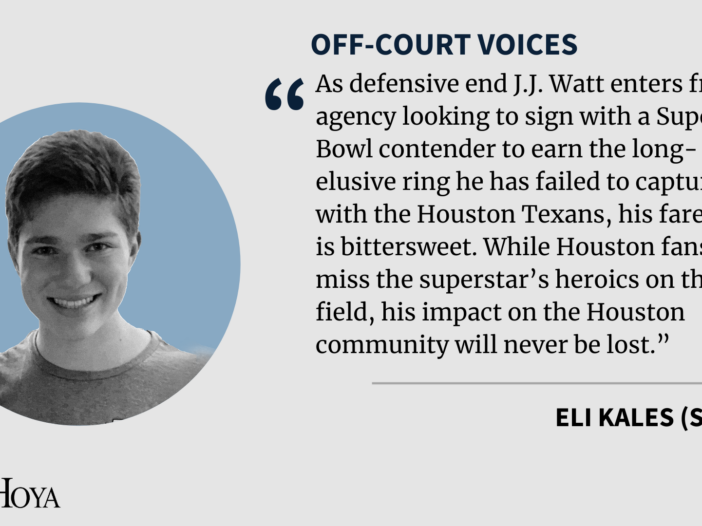 Few players are as dominant in a franchise as three-time NFL Defensive Player of the Year J.J. Watt, one of just three players to earn the award in three separate seasons. On Feb. 12, however, the Houston Texans announced they would be releasing Watt after 10 seasons, amid organizational turmoil and clear signs of Houston rebuilding in the upcoming seasons.

While Watt leaves Houston as the franchise leader in both sacks and forced fumbles, his most notable impact may be his effect on the team’s community.

Watt was the 2017 Walter Payton Man of the Year recipient, awarded to honor NFL players who make significant contributions to their local communities. Watt earned the award for his work to help the city of Houston recover from the devastating impacts of Hurricane Harvey in August 2017. Watt and the foundation he founded, the J.J. Watt Foundation, raised more than $37 million to aid in the rebuilding of the city, especially impressive considering the fact Watt initially set a goal of just $200,000. Watt also donated $100,000 of his own money toward his foundation’s fundraising efforts.

Watt was eager to raise money for his hometown to help rebuild southeastern Texas following the mass destruction from the hurricane, he said.

“It’s very tough to watch your city get hit by such a bad storm and not be there to help,” Watt said in a video posted on social media to help promote his foundation’s efforts following Hurricane Harvey.

In an update two years after the hurricane, Watt announced this money helped rebuild more than 1,183 homes in the area that were damaged by the hurricane. Additionally, the money recovered and built more than 971 child care centers and after-school programs, which have served over 108,000 kids. Furthermore, Watt’s foundation donated 239 million meals to victims of the hurricane.

For these families, Watt’s impact on Houston extends beyond his Pro Bowl performances on the field. His care and compassion helped rebuild a city devastated by one of the largest natural disasters in modern history.

Watt used social media to thank the Houston community for its efforts in donating and aiding in his projects to help victims of the hurricane.

“None of this would have been possible without your generosity. Thank you for continuing to shine a light on the beauty of the human spirit. #HoustonStrong,” Watt wrote on Twitter.

While Watt’s charitable efforts following Hurricane Harvey earned him the Walter Payton Award, his impact extended beyond the consequences of the hurricane. Watt’s foundation has also donated more than $6 million to athletic programs and after-school activities for schools around the nation that have struggled with funding.

In addition, Watt personally helped the families of victims of school shootings recover from the losses they have suffered. Following the 2012 Sandy Hook Elementary School shooting, Watt invited some of the victims’ families, who lived in Houston, to throw around a football together on the team’s field and spend time together. Watt also gave away game-worn, signed merchandise to these families. Similarly, after the Santa Fe High School shooting in Texas in 2018, Watt offered to cover funeral costs for the victims’ families.

While Watt is dominant on the field, his most significant impact is arguably felt in the community, where his humanitarian efforts have helped change lives.

Watt has also been known to visit children’s hospitals around the area, often to spend time with children suffering from cancer. Watt’s hurricane aid and generosity toward those having lost a loved one in a school shooting are just the tip of the iceberg in terms of Watt’s giving, one Houston official revealed.

“People would be shocked if they knew how much he did privately,” an anonymous Houston official said after Watt earned the WPMOY award.

While Watt hails from Wisconsin, Houston has become his home, and he has embraced the city since he first arrived. After his release was announced, Watt took to social media to post a video thanking the city for all it has given him in the past decade.

“I can’t imagine my life without Texas in it,” Watt said. “You treated me like family, and I truly feel like you’re my family. Since that day, I have tried to do everything in my power to work and earn your respect and try to make you proud on and off the field. You guys have given me everything I need and more, and I can only hope that you feel like I’ve given you everything I have.”

As the defensive end enters free agency looking to sign with a Super Bowl contender to earn the long-elusive ring he has failed to capture with Houston, his farewell is bittersweet. While Houston fans will miss the superstar’s heroics on the field, his impact on the Houston community will never be lost.

Eli Kales is a first-year in the School of Foreign Service. Off-Court Voices appears online every other week.