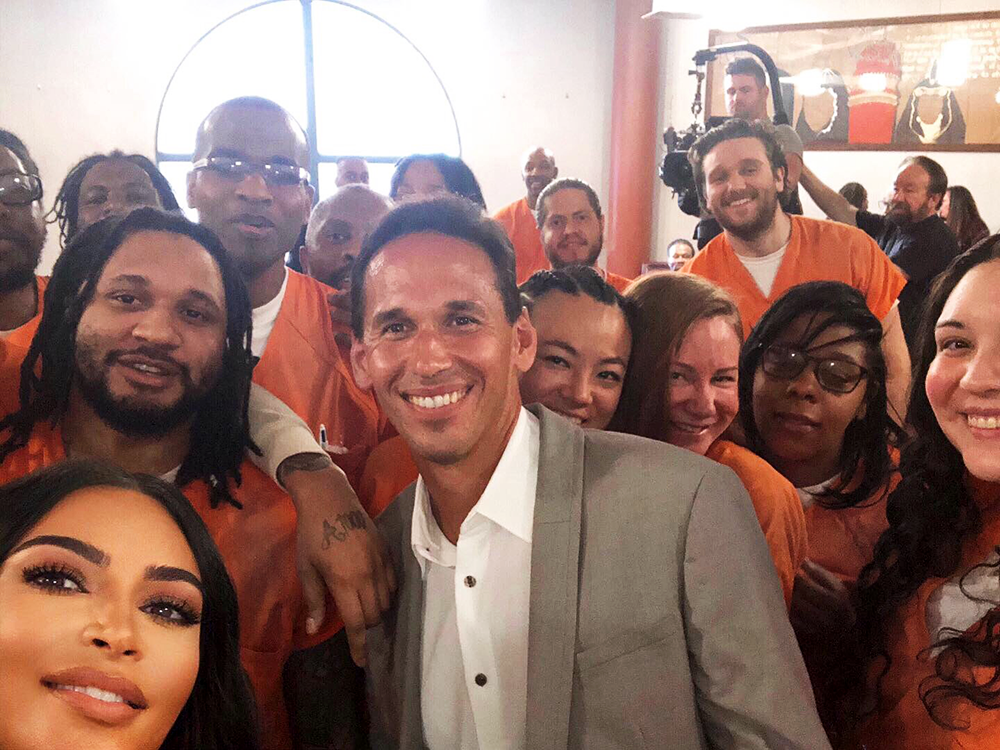 The Prisons and Justice Initiative will be featured in Kim Kardashian West’s upcoming Oxygen documentary following her work on prison reform and in a separate television documentary on an unannounced major network.

The Georgetown Prison Scholars Program at the D.C. Jail, launched by Howard’s initiative in January 2018, provides both credit and noncredit courses for incarcerated scholars and will feature in the Oxygen special.

The Prisons and Justice Initiative has hosted multiple course for Georgetown University students annually. A spring 2020 class will be filmed by a professional crew for a multi-episode documentary series to air on a major network. The course, “Making an Exoneree,” focuses on the cases of six likely wrongfully convicted people and has attracted national media attention in the past.

Kardashian West’s advocacy began in 2018, when the reality star ran a successful campaign for Alice Marie Johnson’s clemency. After discovering a passion for criminal justice reform, Kardashian West made it one of her priorities to help grant more citizens like Johnson their freedoms and rights.

Following her D.C. visit, Kardashian West tweeted her support of Howard’s work and applauded his desire to educate college students about criminal reform.

“Last week I was so moved by Dr. Marc Howard, a Georgetown professor who teaches a course inside of a DC prison where men & women can get Georgetown credits,” the tweet wrote. “I met so many amazing people that can’t wait to share their stories with you.”

A premiere date for “Kim Kardashian West: The Justice Project” has yet to be announced.

In Howard’s “Prison Reform Project” course, students conduct intensive research on the cases and develop short documentaries, websites and social media campaigns that advocate for the innocence of a wrongfully committed person.

Howard’s goal is for students to become lifelong supporters of criminal justice reform, Howard wrote in an email to The Hoya.

“I want students to walk away from the class with pride (for their tireless work to try to save an innocent person’s life), compassion (for the suffering of others), and empowerment (based on their ability to effect real change in the world),” Howard wrote. “But most importantly I want them to develop a lifelong passion for correcting injustice that can never be extinguished, no matter what their individual futures hold.”

The course requires students to apply months in advance. Students must submit a brief cover letter, a resume, an unofficial transcript and a three-minute webcam video to be considered. Nearly 100 applications have been submitted for the spring 2020 version of the course, but only 15 students will be accepted.

Howard’s course allows students to see how their work can make an impact, government department Chair Charles King wrote in an email to The Hoya.

“Prof. Howard has become a noted authority on prisons and punishment in a global context and, through his innovative teaching, has broken down the walls between incarcerated individuals and the rest of American society,” King wrote. “This is exactly the kind of work that we should all strive to do—daring, pathbreaking, and truly life-changing.”

Howard’s course began in 2016 with the pilot course involving extended class meetings and student interactions with incarcerated individuals. The course gained national attention and was featured as the cover story of The Washington Post in September 2016.

The 2018 and 2019 cohorts of “Prison Reform Project” also focused on wrongful convictions. Last year’s class investigated the cases of six wrongfully convicted men in the mid-Atlantic region, hoping to prove their innocence, according to Alex Buffone (COL ’20), who took Howard’s course.

Although he and his classmates did not exonerate their client within just one semester, Buffone wrote that the course left a lasting impression on him.
“It was by far the greatest experience of not only my academic life, but also my life in general. It totally changed my perspective of our government and the criminal justice system. It was so rewarding to see how your work was positively impacting someone’s life,” Buffone wrote. “Myself and my group continue to work on the case and are hopeful that Eric (our client) will be exonerated.”
Three undergraduate students in Howard’s 2018 “Prison Reform Project” seminar unearthed evidence that led to the exoneration of Valentino Dixon, who spent 26 years in prison after being found guilty of murder.

As the course moves into its fourth iteration, Howard hopes the publicity will show others the need for justice reform and to continue to empower students to become strong advocates.

“My hope is that the course will lead to a successful and long-running TV show, that we will help exonerate even more people–as we have so far with Valentino Dixon–and that we will change public perception about both wrongful convictions and the ability of students to improve the world,” Howard wrote. “We definitely hope to have reunions with past students, and hopefully more exonerees.”