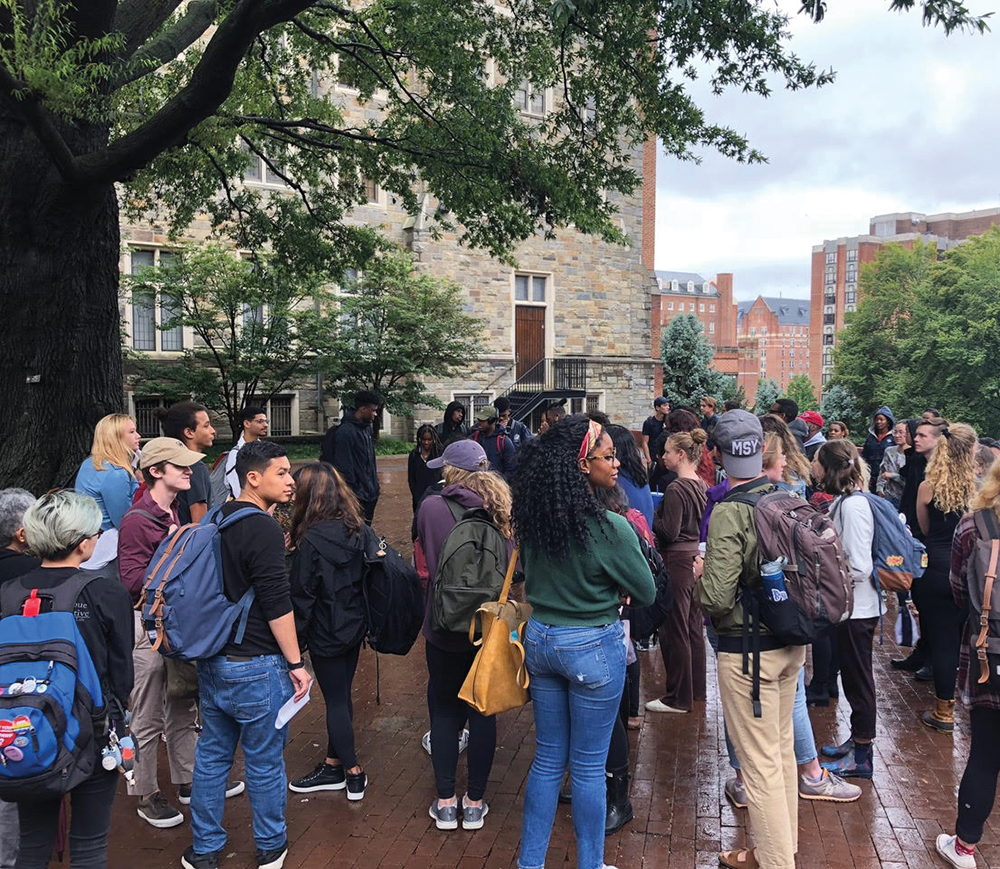 Students and congressional alumni shared messages of support for Christine Blasey Ford after her Thursday testimony on Capitol Hill regarding allegations of sexual misconduct, but expressed unease about the greater implications of Supreme Court nominee Brett Kavanaugh’s potential confirmation.

Ford and Kavanaugh testified Thursday before the Senate Judiciary Committee regarding Ford’s recent allegations that Kavanaugh sexually assaulted her when they were both teenagers.

Ford’s account came out following Kavanaugh’s confirmation hearing Sept. 16; she accused him of sexually assaulting her in 1982, when she was 15 and he was 17. Kavanaugh has denied the accusations, along with two accusations that have surfaced since Ford’s came to light.

In the days leading up to Ford’s testimony, Deborah Ramirez and Julie Swetnick came forward with allegations of sexual assault against Kavanaugh, and reports of Kavanaugh’s alleged heavy drinking in high school surfaced.

Ford testified first, describing the incident and the impact it had on her life. Ford could not remember several details about the party at which she said the incident occurred, such as exactly when or where it was, but said she could remember distinctly the feelings of Kavanaugh’s hand covering her mouth.

When Leahy asked Ford how certain she was that Kavanaugh was her assailant, Ford responded, “100 percent.”

H*yas for Choice President Angela Maske (COL ’19), Casey Doherty (COL ’20), Venishea Smith (COL ’21) and Andrew Straky (COL ’20) were among the Georgetown students who protested at the Capitol today. This comes after messages of support for Ford were written in chalk in red square last week.

Doherty went to the Capitol Thursday because she felt a responsibility to support Ford.

“I felt like I needed to be there to show support for Dr. Ford,” Doherty wrote in an email to The Hoya. “She is so courageous and deserves all the support in the world, and I wanted to be at least a small part of that. Dr. Ford has upended her life because she felt a responsibility to share her story.”

Kavanaugh testified next, saying that those on the left of the political spectrum have unfairly worked to prevent his confirmation.

“The Constitution gives the Senate an important role in the confirmation process, but you have replaced advice and consent with search and destroy,” Kavanaugh said. “Since my nomination in July, there has been a frenzy on the left to come up with something, anything to block my confirmation.”

Durbin said Ford showed bravery in her testimony today, which he says will undoubtedly serve to empower survivors of sexual assault nationwide.

The Judiciary Committee is set to vote Friday morning on whether to advance Kavanaugh’s nomination.

Doherty said Kavanaugh’s confirmation would send a harmful message to those watching.

“If Kavanaugh is confirmed to the highest court in the United States, the message to the public will be: Our lawmakers care more about upholding traditional structures of power and powerful men than listening to, respecting, and responding to survivors of sexual assault,” Doherty wrote. “It will hurt me, many people I know, and many more people I do not know irreparably.”

Maske, who has been regularly visiting the Senate office buildings to urge Collins to oppose Kavanaugh’s confirmation, said to Refinery 29 she went to the hearing to continue her opposition.

“I’m here in the Hart Senate Office Building to show that I stand with survivors and that Brett Kavanaugh should not be confirmed to the supreme court,” Maske told Refinery 29.

A spokesperson for H*yas for Choice said the organization firmly opposes Kavanaugh’s confirmation to the Supreme Court and praised Ford for her decision to come forth with her accusations.

“It is now even more clear that Kavanaugh cannot be confirmed to the Supreme Court—no person who has perpetrated sexual assault should sit on the nation’s highest court, or in any position of power, period,” the spokesperson wrote in an email to The Hoya. “Further, we would like to commend and acknowledge the bravery and selflessness demonstrated by Dr. Blasey Ford while she testified today.”

The members of GU Women of Color wrote in an email to The Hoya that they support Ford and worry about certain senators’ reaction to Ford’s testimony.

“We are in support of Dr. Ford and her authentic testimony and we hope that the Senate does not allow someone who can manipulate people and bodies into the Supreme Court,” GUWoC wrote. “However, it is unsettling to know that women of color are even less empowered to speak up about sexual assault and harassment because of the negligence apparent in the testimony.”

“This is a very pivotal moment in American politics and on our campus as it represents how deeply embedded misogyny and rape culture are in our society,” Cornell wrote in an email to The Hoya. “Especially when considering the accusations brought up against the previous GUSA president and conversations about sexual misconduct in the Catholic Church, this has been a very difficult time for students on campus, whether they are a survivor of sexual assault or not.”

Former Georgetown University Student Association President Sahil Nair (SFS ’19) resigned on Sept. 11 amid allegations of sexual assault. No complaints had been filed against Nair through the Title IX office or the Office of Student Conduct, he wrote in a May 28 email to The Hoya. A university spokesperson confirmed that, as of May 2019, Nair was not the subject of any complaints through either office nor had he been found responsible for any violations of the Student Code of Conduct.

Cornell hopes the university will begin to use its platform and address the current climate surrounding sexual assault.

“I hope that the University administration will end its quite deafening silence around what is happening both on and off campus and will start providing resources and spaces students and workers need to heal from this trauma,” Cornell wrote.

This article was updated July 2 to indicate the absence of Title IX or Office of Student Conduct complaints and to include comment from Nair.

Resources: On-campus resources include Health Education Services (202-687-8949) and Counseling and Psychiatric Services (202-687-7080); additional off-campus resources include the D.C. Rape Crisis Center (202-333-7273) and the D.C. Forensic Nurse Examiner Washington Hospital Center (844-443-5732). If you or anyone you know would like to receive a sexual assault forensic examination or other medical care—including emergency contraception—call the Network for Victim Recovery of D.C. at 202-742-1727. Emergency contraception is available at the CVS located at 1403 Wisconsin Ave NW. To report sexual misconduct, you can contact Georgetown’s interim Title IX coordinator at 202-687-9183 or file an online report here.