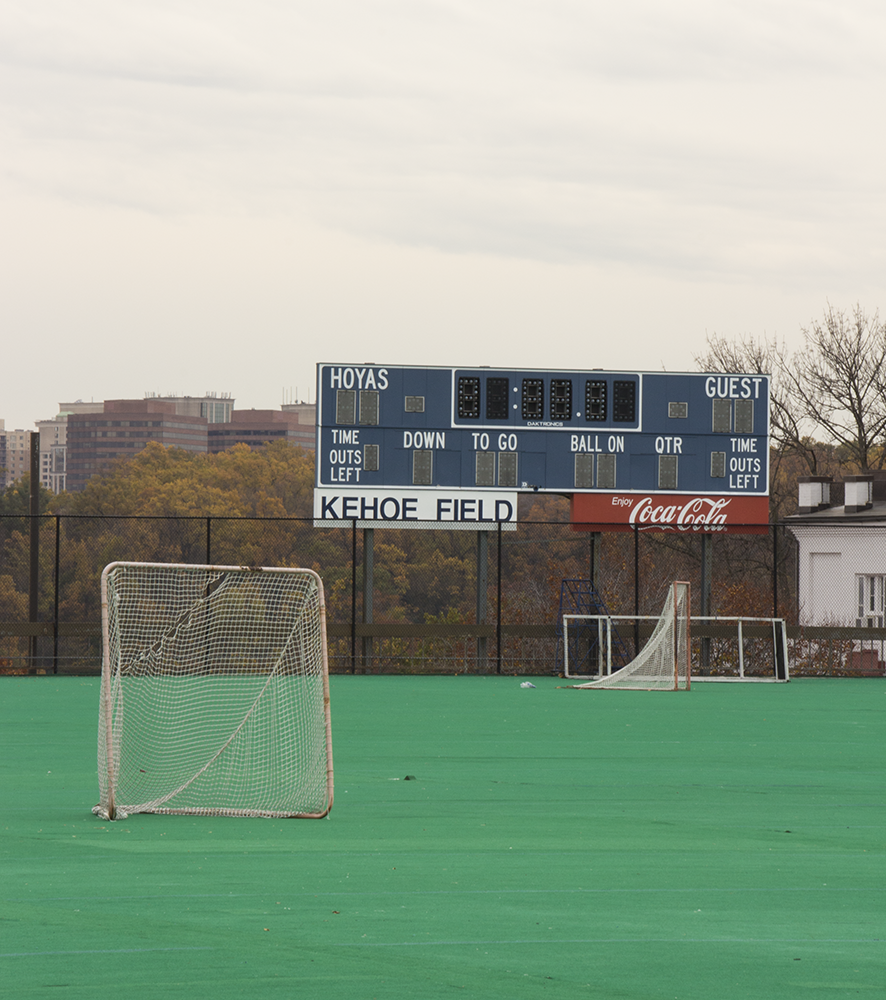 While the university is set to break ground on the $60 million John R. Thompson Jr. Intercollegiate Athletic Center, which will serve as the new home of Georgetown varsity athletics, the condition of Kehoe Field continues to worsen, drawing ire from members of the club and intramural sports teams that practice there.

The university has enlisted the help of engineering firms Simpson Gumpertz & Heger and Robert Silman Associates to conduct a study of a renovation of Kehoe, which was deemed unfit for varsity practice in 2007. The university anticipates that the study will conclude in January and preliminary estimates place the cost for the necessary renovations at $10 million.

“That study will determine what’s the best approach to addressing the structural issue of the field in the most economical way, the total deferred maintenance requirements of Yates as a whole and what program will go on top of the field once it is replaced,” Vice President for Planning and Facilities Management Robin Morey said.

The roof of Yates, which also serves as the base of the field, is a lightweight concrete that contributes to many of Kehoe’s structural problems. Over time, the concrete has deteriorated and clogged drainage lines. This has led to divots, ripped field surfaces and bumpy turf.

Morey said that the university is looking to correct these problems and improve the playing surface.

“We need to look at it programmatically and we need to find the financial wherewithal to make it happen,” he said. “We recognize it’s an issue and we’re working as hard as we can to get it fixed. It’s a lot of space that could be better utilized.”

This is not the first study to look into Kehoe, but it may be the first seen to completion. The university previously commissioned a similar study into the feasibility of repairing Kehoe, but abandoned it due to budget constraints.

“I think the current condition of Kehoe is dreadful and seriously hazardous to anyone playing up there, whether competitively or casually,” Altema said.
Problems with Kehoe Field have forced some club teams, including Ultimate Frisbee and men’s soccer, to alter their practices in order to take extra precaution.

“We’re wary of the increased likelihood of injury on Kehoe,” Javitt said.

Altema, who sustained an ankle injury on the field last year, said club soccer will not practice at all when the field is wet to avoid injury.

“We are definitely more cautious when playing on Kehoe,” Altema said. “Players are more cognizant of cement bumps and pits in certain areas of the field, which detracts from the intensity of practices.”

Javitt said that Kehoe continues to worsen each year, and nothing has been done to repair it.

“Every year I’ve been here, more and more cracks appear in the turf and bare concrete is exposed,” Javitt said. “There are areas where there are noticeable divots, where the turf is not even supported by concrete.”

Georgetown University Student Association President Trevor Tezel (SFS ’15) said GUSA has been a proponent of Kehoe renovation since a 2013 survey by the university revealed that many students suffered injuries on the field.

“Through various avenues, GUSA advocated to have that feasibility study re-prioritized, and that it should be done by the end of the academic year,” he said.

Altema said that the administration’s response to problems on the field has been frustrating for members of club sports teams.

“The club sports department has been totally fair and compliant when it comes to maximizing time allotted to teams to play on MultiSport [Facility],” Altema said. “Nonetheless, it seems irresponsible on the university’s part to have allowed these safety issues to persist for so long, only to address complaints by laying down a single lowly patch of new turf.”