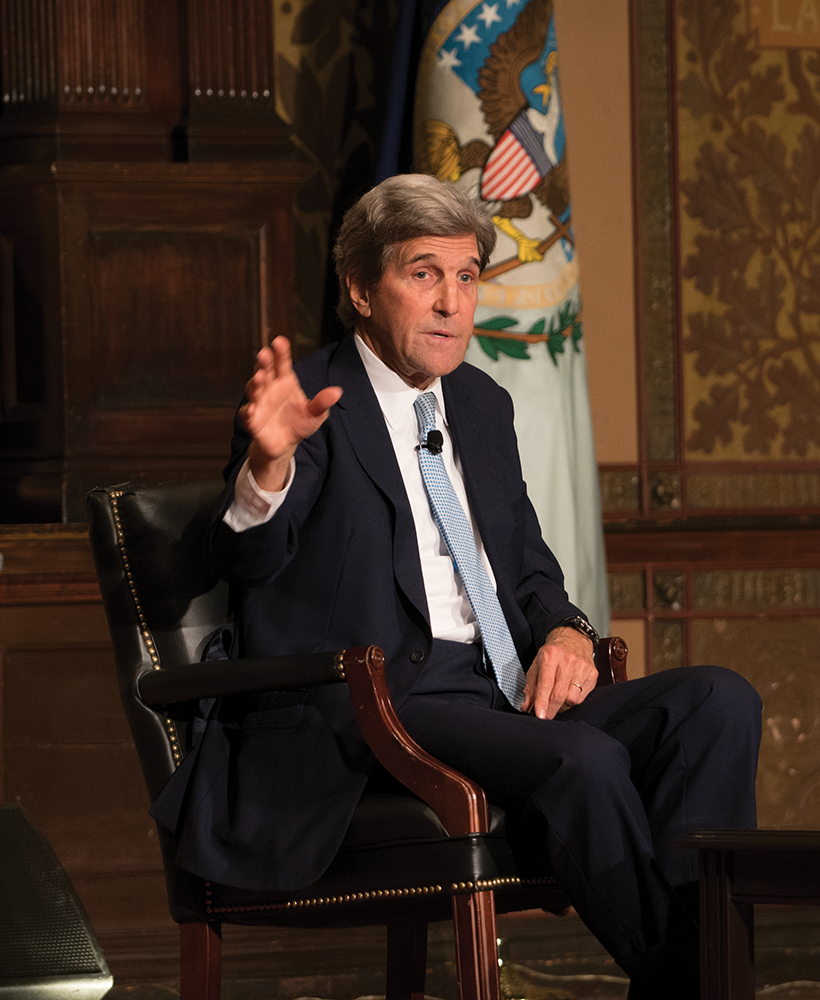 U.S. democracy is faltering, and citizens must hold their government accountable to rebuild the United States, urged former Secretary of State John Kerry at an event Thursday evening in Gaston Hall.

Kerry blamed the failings of U.S. democratic institutions, in areas ranging from gender equality to election finance, in part on highly partisan politics.

“Our democracy right now is not working; we’re not making decisions,” Kerry said. “What’s happened today is, sadly, we have people who are more beholden to protect their power, party and president than they are to hold their oath of office, the constitution, and to protect the institution in which they serve. And that’s just plain wrong.”

Kerry was joined by retired Assistant Secretary for Public Affairs at the U.S. Department of State Admiral John Kirby. Kirby is an adjunct lecturer in the journalism program at Georgetown.

The pair spoke about Kerry’s new book, “Every Day is Extra,” an autobiography published Sept. 4, in the conversation hosted by the Georgetown University’s Master of Science in Foreign Service program.

Drawing on historical examples, including the civil rights movement, Kerry said citizens have to engage with the democratic processes of the United States to hold political systems and leaders accountable. Historically, young people have spearheaded some advocacy efforts, he said.

College-age students now more than ever, Kerry insisted, need to use elections to combat corrupting influences in government.

“You all have an amazing power. I hope you will recognize your own power right now. I know you have to study like hell,” Kerry said. “But lots of folks before you have managed to make it through to exams, write their dissertation and still change the nation at the same time, and we need you more than ever. We cannot be a nation where only 54.2 percent of the eligible voters in our nation see fit to come out to vote for the presidency of our nation.”

For the 2016 election, 90.4 percent of Georgetown students were registered to vote prior to the election, with 71.1 percent of registered students turning out to vote, resulting in a student turnout rate of 64.2 percent at Georgetown, according to a 2016 report by the National Study of Learning, Voting and Engagement.

Past elections serve as evidence of the opportunity for social change that can result from voting, according to Kerry. He also emphasized the role that voters can have in the upcoming midterm elections Nov. 6 to hold political leaders accountable.

“In 34 days, we have a course correction election in America, and we have to make sure the candidates are being held accountable on what they’re willing to do and what they’re going to do for the environment, climate change, for energy and for a host of other issues,” Kerry said. “I tell you folks, because I had five elections, I got elected to the Senate five times. There is nothing like your friends losing on a specific issue to stiffen the spine of the people who survived.”

Global climate change is one of the single greatest threats facing the nation and world, Kerry said, criticizing President Donald Trump’s June 1, 2017 decision to withdraw from the Paris Climate Agreement, an international agreement to reduce climate change by mitigating greenhouse gas emissions passed in December 2015. Signatories of the agreement pledged to limit the global temperature rise to below 2 degrees Celsius.

“We’re not respecting God’s work, creation,” Kerry said. “This is about life and death, and people sometimes accuse me of getting a little bit hot about this, and I do. I’m angry about it because the decision the president made to get out of Paris for ideological reasons was not based on one single scientific fact.”

“We are not guaranteeing the world we will hold the world’s temperature to a rise of 2 degrees centigrade,” Kerry said. “We’re just not achieving that in this because no country is reducing enough to meet that target.”

Kerry cited damages inflicted by recent natural disasters — including Hurricane Maria, which struck Puerto Rico in September 2017; Hurricane Irma, which hit Caribbean islands in August 2017; and Hurricane Harvey, which made landfall near Houston in August 2017 — as further evidence for a need to shift away from fossil fuels. The three storms required $265 billion for clean-up costs.

Kerry expressed hope that strengthening the U.S. democratic process is possible, but significant work is needed to return the United States to past prominence, he said.

“We’re the country that invented the internet, the country that went to the moon. We need to rebuild America, and we need to deal with these relentless traffic jams where you can’t move anywhere in our country,” Kerry said.