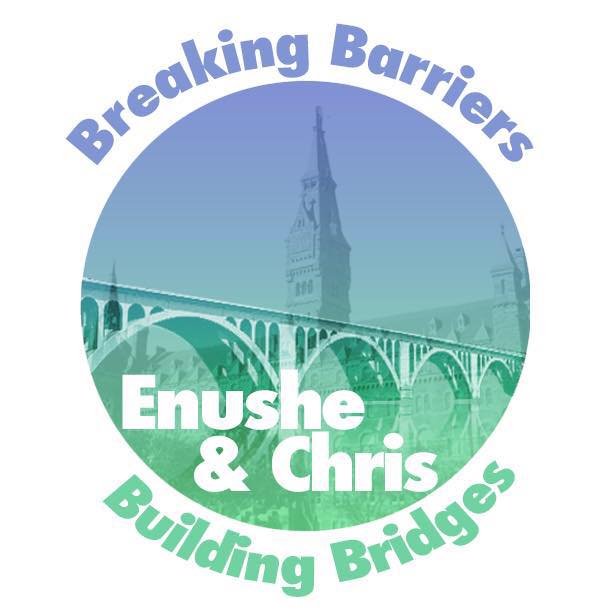 The election results — which will be certified by the GUSA senate at 5 p.m. Sunday — were released 15 hours later than usual by the GUSA Election Commission, which cited procedural issues that questioned the election’s integrity as cause for the delay.

Khan said she is excited for the year ahead.

“I’m so happy, so thankful, this is the best group of people possible and honestly I’m so excited for things this team is going to be doing for the next year,” Khan said. “We’re so excited, and hopefully everything goes smoothly on Sunday. We’re beyond thrilled.”

Fisk said he and Khan plan to work together with other campaigns and underrepresented groups on campus to make meaningful change.

“We’re excited to work together. There’s so much that needs to get done at Georgetown, and if we all work together we can make a big big impact here,” Fisk said.

The write-in ticket of the Wisemiller’s Hot Chick and Chicken Madness sandwiches came second, with 725 total votes in the first round and 878 votes in the final round.

The write-in ticket of Reed Howard (SFS ’17) and Courtney Maduike (SFS ’17) placed third, with 440 votes in the first round and 454 votes in the second round, followed by write-in candidates Maddy Moore (SFS ’17)  and Scott Lowder (COL ’17) who placed fourth with 58 votes.

Thirty-three percent of the undergraduate student body voted in the election, with voter turnout totaling 2,388, markedly lower than the 3,637 votes in 2015 and the all-time election record of 3,733 votes in 2013.

GUSA Election Commissioner Alden Fletcher (SFS ’17) said the delay was caused by a procedural error related to the five write-in ballots, and that the issue would be brought to the senate on Sunday during certification.

“We thought that considering this error related to the executive ballot we wait for publishing results,” Fletcher said. “Upon further advice and consent from other relevant bodies in GUSA, that being the Constitutional Council, some members of the senate and the exec, we essentially decided that the best course would be to publish the results as they are and then the procedural issue is going to be brought up in the senate vote on certification this coming Sunday.”

The results were announced at 5 p.m. Friday, and were live-tweeted by the GUSA Election Commission over the course of 20 minutes.

The final results were similar to the results of The Hoya’s 2016 poll, which placed Khan and Fisk as winners with 38.46 percent of likely voters supporting them.

This year’s GUSA executive election cycle began at midnight on Feb. 4, with voting beginning at 10 p.m. Wednesday and ended when voting completed at 12:05 a.m. Friday.

Khan and Fisk, who ran backed by campaign manager Alex Bobroske (SFS ’17) and a campaign team of over 200 students — one of the largest in GUSA history — received endorsements from the editorial boards of The Hoya and The Georgetown Voice.

The Khan-Fisk campaign ran on a 23-issue, comprehensive platform that highlighted inclusivity, restructuring GUSA and socio-economic issues as the principal issues of its campaign.

Early priorities for the Khan-Fisk ticket include addressing campus dining quality and contract options, the new D.C. policing bill, which would allow Georgetown University Police Department to patrol off campus, and the campus plan.

Howard and Maduike, led by Bserat Ghebremicael (MSB ’17), launched their campaign late in the election, formally announcing via a social media campaign and informal town hall in the Former Jesuit Residence on Monday.

Howard and Maduike ran on a one-page platform focused on college affordability, race issues at Georgetown and the campus plan.

Howard and Maduike’s college affordability platform focused on increasing university transparency about where tuition money is spent, while their race platform targeted reforming the manner in which Counseling and Psychiatric Services approaches and serves minority groups.

Howard and Maduike petitioned the Constitutional Council on Sunday to allow them to be placed on the ballot, claiming the GUSA Election Commission does not have the authority to set deadlines for registration forms and that the GUSA bylaws do not require candidates to attend mandatory information sessions to receive registration forms. The Constitutional Council ruled against them Tuesday.

The Constitutional Council on Wednesday instructed the Election Commission to include five write-in slots on the ballot instead of one, following a petition by Howard and Maduike.

Hot Chick and Chicken Madness, led by translator Anirudha Vaddadi (SFS ’16), ran a satirical write-in ticket throughout the campaign, without any formal policy.

Moore and Lowder both served in GUSA this year. Moore was the GUSA Secretary of Student Safety, while Lowder was a “What’s a Hoya?” coordinator.

This post will be updated as more information becomes available.