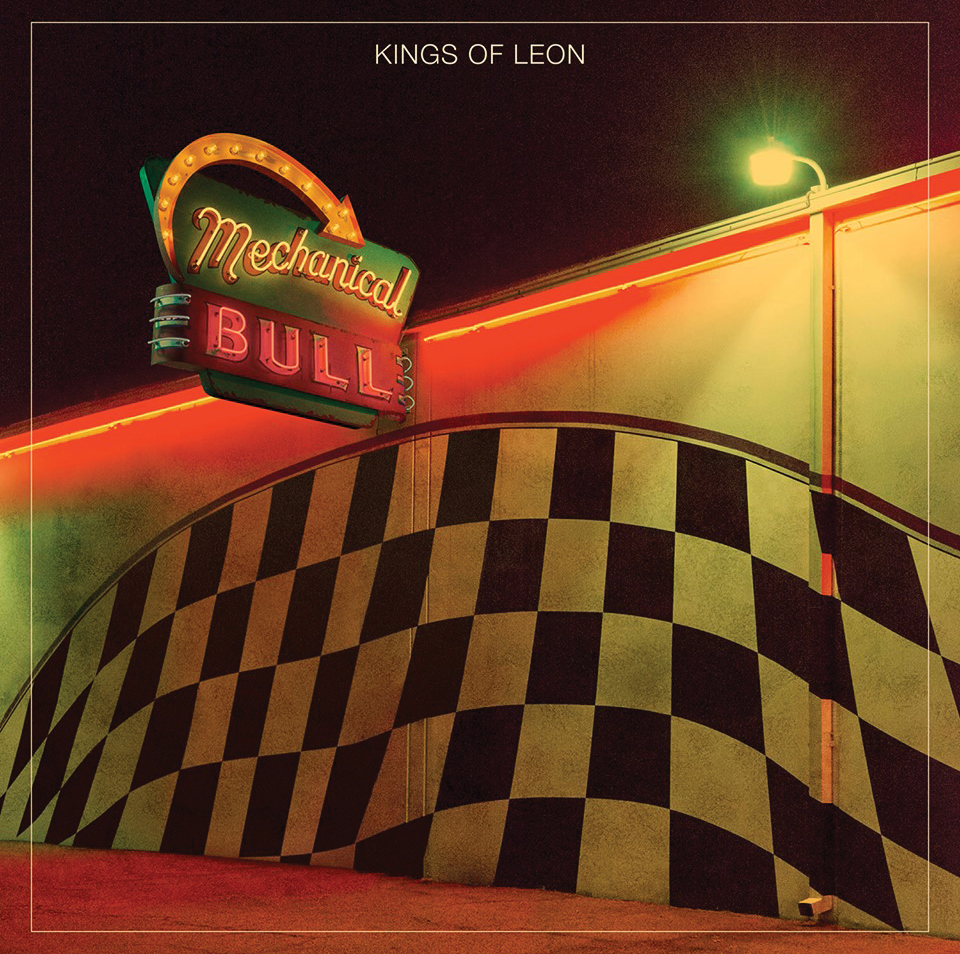 With their sixth studio album Mechanical Bull, Kings of Leon has returned, albeit with a stripped-down sound. This literal band of brothers, led by frontman Caleb Followill, achieved commercial and critical success in 2009 with powerful hits like “Sex on Fire” and the Grammy-winning “Use Somebody.” In the past four years, their mainstream popularity has waned, but the band’s latest effort is far from an attempt to compete with the pop hits topping charts today. Instead, the brothers, connecting to their Nashville roots, tried to deliver unpretentious, well-crafted music for fans of rock. Mechanical Bull may lack powerful stadium anthems, but the music it does have is satisfying and almost always intriguing.

The album opens with its first official single, “Supersoaker,” a fast-paced plea for the vocalist’s “sentimental girl” to stay with him. Lyrically self-deprecating yet musically bright, the track sets the collection off to a good start. From there, however, the album feels stagnant, with a few mediocre songs, like the grungy “Don’t Matter,” which, when compared to some of the band’s other standouts, truly don’t.

The sound picks up again with a series of quality tracks that provide a strong core for Mechanical Bull.  In “Beautiful War,” the band took a simple idea — that love means there is something worth fighting for — and produced an even simpler ballad. “Beautiful War” is nothing too inspired, though. In fact, it sounds like a response to John Mayer’s “Heartbreak Warfare,” but it’s a nice change of pace, and it shows off a more emotional performance by Followill. The winning streak continues with “Temple.” Its stream of consciousness lyrics about nervously meeting a girl are playful and smart and make for an effortless track that just works.

With “Family Tree,” the playfulness lingers on. The song starts with some funky, Hendrix-inspired guitar and eventually builds to a big finale that introduces added vocals and lots of clapping. “Family Tree” is a fun, infectiously catchy tune, the kind that’s destined to end up in an Apple commercial.

Of all the new material on Mechanical Bull, “Tonight” feels most familiar. It’s instrumentally heavy and vocally loud, much like the band’s earlier hits. Although it does not seem entirely out of place, “Tonight” sounds like a slight break from the album’s norm, a quick off-course excursion to an old stomping ground before returning to the main road.

While solid, the second half of the album is not without fault. “Comeback Story” is far from a comeback and constitutes the weakest four minutes on Mechanical Bull. Its mundane lyrics come off as a failed attempt at something very clever and ruin its otherwise pleasant sound. Fortunately, “Comeback Story” stands alone in its dullness.

To close the record, Kings of Leon makes use of their Nashville upbringing with “On the Chin,” a beautiful, slow song about supporting a friend. This track ventures into the country genre more than any other song on the album. It’s a peculiar choice for a rock band to leave listeners with a predominately country song, but ending on a quiet note works nicely.

For the most part, Mechanical Bull sounds like a local band’s set at a dive bar.  From its lyrics to its cover art and even to its title, the album evokes a sense of intimacy and grittiness. The band provides a simple, restrained sound, rather than a dozen attempts at arena-filling, chart-topping power ballads. Kings of Leon chose a direction, and in traveling there, they were mostly successful. AlthoughMechanical Bull is mainly an album for those who already listen to rock and already like Kings of Leon, there’s a good chance newcomers will find themselves amused, a little shaken and certainly entertained.