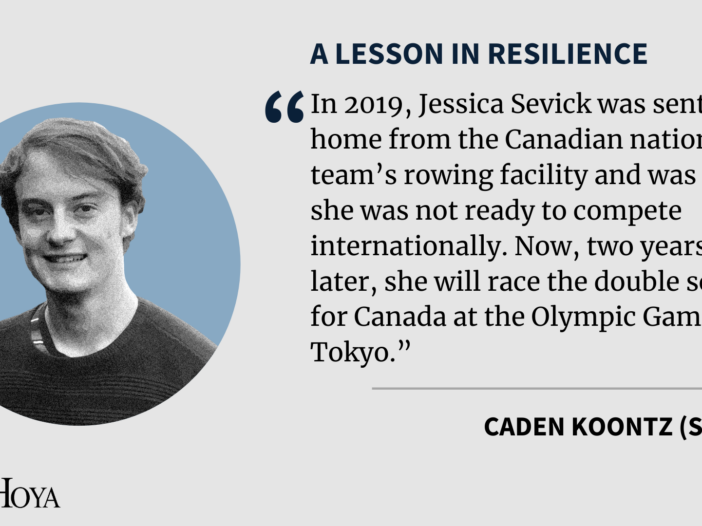 In 2019, Jessica Sevick was sent home from the Canadian national team’s rowing facility and was told she was not ready to compete internationally. Now, two years later, she will race the double sculls for Canada at the Olympic Games in Tokyo.

Sevick’s rowing career began as a rehab assignment. She tore her ACL, MCL and meniscus while playing recreational soccer in 2013 and was struggling to recover eight months later, but her fate changed with a chance encounter at a Calgary grocery store. There, Sevick’s mother ran into Roma Oleksyn, a member of the Calgary Rowing Club and physiotherapist Sevick had seen in the past, who suggested Sevick try rowing for recovery and exercise.

“It’s actually hilarious because we live in an acreage outside of Calgary and my mom was in downtown Calgary for some reason at a grocery store,” Sevick said in an interview with The Hoya.

Sevick agreed to give rowing a try, thinking it could be a great way to make some new friends and get back in shape. During her first winter with the club, she immediately connected with the sport.

“I was really fortunate because for some reason there were a whole bunch of fast women in Calgary who all dropped in at the same time,” Sevick said. “Rowing pretty much took over my life.”

An enormous part of rowing training is a machine called an ergometer, or “erg” for short, an indoor rowing machine on which athletes can time themselves rowing over specific distances. These timed runs, often 2 or 6 kilometers long, are the main metrics by which rowers are measured. Sevick spent the first few months of her rowing career on the erg, cutting down her times and working on her technique.

“For women, pulling under a seven-minute 2k is when the national team starts to notice you,” Sevick said.

When Sevick rowed on the water for the first time in the spring of 2016, she learned that pulling on the machine and rowing an actual boat are two very different things. The Calgary Rowing Club trains on Glenmore Reservoir, which freezes over during the winter.

“I flipped like seven times in one month when the water was two degrees [35.6 degrees Fahrenheit],” Sevick said. “It was an absolute nightmare.”

The transition to the water was particularly challenging for Sevick because she suffers from balance issues as result of a traumatic brain injury she sustained as a 12-year-old. She was competing in the luge at the time, and on a practice run, she slammed into the top of the track, lost her helmet and crashed down the rest of the turns. She spent two weeks in a coma.

“Half of my right temporal lobe is dead,” she said.

Sevick made a remarkable recovery from the crash, the first in a long string of dramatic demonstrations of her perseverance. Rowing on the water was just one more challenge she overcame.

“The one thing I really took away from the head injury is resilience,” she said.

In 2017, Sevick left Calgary for the University of British Columbia in Vancouver, British Columbia, to train on the water year round. She was also attracted to the school’s established neuroscience department, where she researched imaging for mild traumatic brain injury as part of the master’s program.

Sevick said this kind of research holds a special weight for her because of her medical history.

“If you get a concussion there’s not usually anything structurally different on your MRIs or CT scans,” she said. “It makes it hard to tell someone what their rehab protocol should be and whether they’ll take a week or six weeks or if they’ll never feel the same.”

But even as Sevick settled into her scholarly and athletic routines, the transition to UBC was far from seamless. She moved into a tiny Vancouver apartment where DJs upstairs blasted music into the early morning. She would fall asleep late, then wake up at 4:30 a.m. and drive 30 minutes to rowing practice — all before class. She was doing well on the water, but the routine was taxing and her mental health suffered.

One of the complications of childhood traumatic brain injury can be anxiety and depression. Sevick found herself dealing with both. But from the outside, everything in Sevick’s life seemed to be going according to plan, which made her struggles all the more difficult, she said.

“Objectively, on paper, I live in this sweet city; I’m doing really well in school; I’m doing what I love; I have this supportive partner; I have an amazing family — but I didn’t feel it,” Sevick said.

She began to question the move to Vancouver and wondered if she should fall back on her old career.

“I’m going into debt to do this school thing,” she thought. “Should I just be working as an engineer?”

But instead of quitting, Sevick persevered and pushed herself to keep her Olympic dream alive.

In 2018, Sevick and the UBC women’s eight won gold at the Canadian University Rowing Championships. Still, Sevick wasn’t registering with national team coaches, and she wasn’t selected when she raced for a spot with Team Canada that summer. She began to question whether she would ever make the team.

“I’m running out of time,” she said. “I’m talking to the [national team] coach but I’m not being invited, should I quit?”

Sevick eventually did meet the qualification standards for the national team and convinced the head coach to let her train at the national team’s facility. She dropped everything, put her master’s degree on hold and moved to Victoria to be closer to the training center.

Two weeks in, the women’s head coach Dave Thompson told her she was not ready to row for Canada,and suggested she head back to Vancouver.

“I was just devastated,” Sevick said. “I cried every day for two weeks.”

Rowing had been Sevick’s whole life since 2015. She had made countless sacrifices for the chance to compete for Canada, swearing off alcohol for whole summers, missing out on vacations and spending thousands of hours training. A year before the Olympics were scheduled to take place in Tokyo, she was off the team.

Sevick headed back to Vancouver to train at UBC and learned to row a single scull. The first time she raced it, she was the only nonnational team athlete to qualify for the A-final. The coaches were impressed and invited her back to the center for weeklong training sessions. They ended up selecting her to race the single at the Pan American Games in Lima, Peru.

Leading up to the Olympics, Rowing Canada hosts an invitational pre-Olympic camp. Only athletes from the camp are selected to row in the Olympics. Sevick was told the only way she would be invited to the camp is if she won gold at the Pan American Games.

She was so new to the single that she worried she might tip.

“How embarrassing would it be if I flip off the start at an international regatta?” she said.

Sevick managed to stay vertical in her heat and qualified for the final, but that night, she started to feel sick. She vomited throughout the next day, didn’t sleep much at all and was so weak on the morning of her final that the team doctor told her to skip warmups as a way to conserve energy. Her stomach hurt so much she couldn’t sit up straight in the boat.

“I thought there was no way I could do anything so I decided to go out and fly-and-die,” Sevick said.

Deciding to go out fast somehow took the pressure off, and Sevick said she got out to the best start of her life. After 500 meters, she was in second place. She told herself she would row the next kilometer at full speed, then burn out, and by the 1,000-meter mark, she had pulled into the lead. She knew her coach would be waiting at the 1,300-meter line, so she told herself she would stay in first so as not to disappoint her coach. At 1,500 meters, she was still winning.

Sevick’s parents were at the finish line. She really didn’t want to lose in front of them, so she willed herself to close out the race.

By this point, Sevick’s eyes were closing and she was on the brink of passing out. She finished the race, collapsed and projectile vomited all over the single. She was so exhausted that she couldn’t get out of her boat on her own strength.

Sevick later found she had won Pan American gold with a bad case of norovirus.

She was invited to the pre-Olympic camp and hoped to make it to Tokyo as a spare, since she had experience with both sculling and sweeping. She finished second in qualifying for the single scull, making it through a huge first round of cuts. The coaches were so impressed that they tried her out in the double scull, which Canada had qualified for the Olympics with a fourth place finish at the 2019 World Rowing Championships.

During training, she fractured two vertebrae but, in classic Sevick fashion, she found her way back to performance shape and proved herself to her coaches once again. She performed so well her coach decided to break up the fourth-place double and send her to Tokyo. Sevick’s dream of representing Canada at the Olympics will come true.