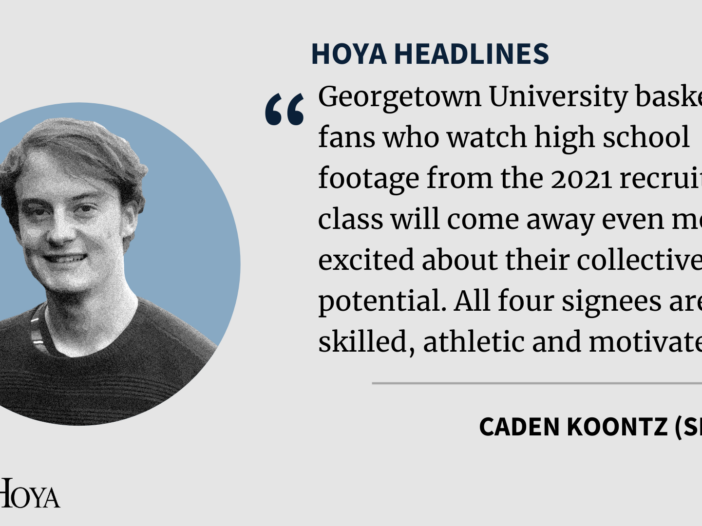 Mutombo is a four-star recruit, Beard, Billingsley and Riley are three stars and the collective recruiting class is the 22nd best in the country, according to 247 Sports. This makes the 2021 class Head Coach Patrick Ewing’s (COL ’85) most highly ranked in his four years leading the program. Expectations are high for the group, but if their high school tapes are any indicator, Mutombo, Beard, Riley and Billingsley will be ready to rise to the occasion.

Mutombo, the most recent commit, is a 6’11” center from Atlanta. He is the son of Hoya basketball great Dikembe Mutombo (SLL ’91), but his game speaks for itself.

The younger Mutombo is the 13th best center prospect in the 2021 class and averaged 24 points, 12 rebounds and four blocks for the Lovett School this past season. Defensively, he affects a lot of shots with his long arms and impressive lateral quickness. Offensively, he has a very soft touch around the rim, good explosiveness and a reliable midrange jumper. He is also working on expanding his range out to the three-point line, a skill that would elevate his game to a very impressive next level and likely cement his status as an NBA prospect.

He will benefit from the tutelage of one of the greatest big men of all time in Ewing and will look to compete for starting minutes from the moment he gets to the Hilltop.

Beard originally committed to Georgetown as part of the 2020 class, then left Whitney M. Young Magnet High School in Chicago to take a postgraduate year at the Hargrave Military Academy in Chatham, Va. Beard is an athletic 6’2” combo guard with the leaping ability to attack above the rim and the ball-handling and distribution skills to be effective both in transition and in the half-court offense.

His posterizing dunk as a high school senior earned him the number one spot on the SportsCenter Top 10 and 1.1 million views, so Beard is no stranger to the spotlight. Georgetown fans will get to enjoy his electrifying play for seasons to come.

Riley, a 6’4” guard from Brentwood, N.Y., is considered one of the most underrated players in the entire 2021 class. Riley is a walking highlight reel, with insane athleticism and enormous potential. As a junior at Brentwood High School, Riley put up on average 23 points, 12 rebounds and four assists per game, leading his team to the Suffolk County Class AA championship.

Riley is not just an incredible athlete, however, as his game tape reveals a smooth jumper, decent ball-handling skills and impressive speed and agility.

The Riley-Beard backcourt, if Ewing ever runs it out, will be one of the most athletic Georgetown has seen in recent years.

Billingsley is a forward from Lutheran High School East. Some sites have him at 6’7”, others at 6’8”, so the young commit may still be growing. Billingsley is a big, strong athlete with a refined three-point shot and an impeccable ability to find an open man off of the drive. He will come in at the forward position, where Georgetown is not particularly deep, especially once senior forward Jamorko Pickett graduates after this coming season.

As a Hoya, Billingsley will help stretch the floor with his range, giving space for Riley and Beard to slash to the paint and keep defenders from collapsing around Mutombo.

Georgetown fans who watch high school footage from this class will come away even more excited about their collective potential. All four signees are skilled, athletic and motivated. It also seems as if the commits are already connecting over social media as Mutombo follows Beard on Instagram, and the two have posted references to each other on their stories. This communication bodes well for their future chemistry and may make Georgetown fans even more eager to see them all together on the Hilltop.

All that’s left to do is to bring in Aminu Mohammed!

Caden Koontz is a sophomore in the School of Foreign Service. Hoya Headlines appears online every other week.