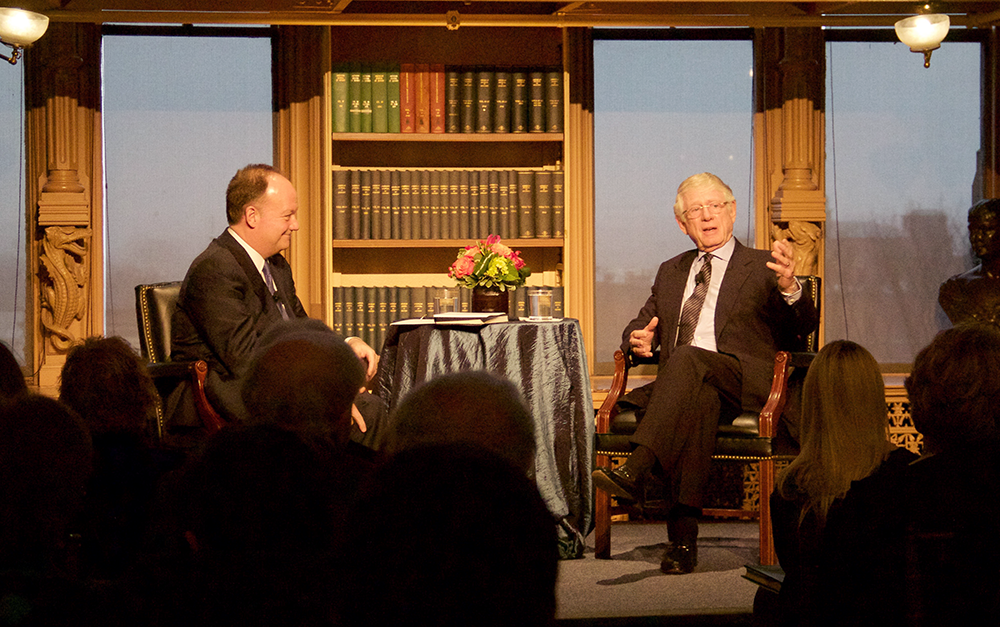 ABC “Nightline” former anchor of 25 years Ted Koppel argued that the United States electrical grid is vulnerable to external attacks and the United States should take countermeasures to prevent this threat while discussing his new book “Lights Out” with University President John DeGioia in Riggs Library on Tuesday.

Koppel, who currently serves as a senior news analyst for National Public Radio, began the discussion by describing conversations with multiple military and intelligence officials who corroborated his convictions that a cyberattack on electrical grids could take place.

Additionally, Koppel expressed his alarm at the lack of coverage this issue has received on the national stage.

“It’s not a question of if this happens, it’s just a question of when. And that was the message I kept getting repeated and I think it’s significant that here we are and this still isn’t being talked about. None of the presidential candidates — except Jim Webb — have had anything to say about this,” Koppel said.

Koppel contended that a hack of the nation’s electrical system would entail a national or regional blackout that may cause the deaths of millions.

The United States has focused more resources on less effective security measures, according to Koppel. Koppel cited the $7 billion spent on the Transportation Security Administration every year following the 9/11 attacks, despite the agency’s 5-percent success rate, as an example of the reactionary nature of the United State’s defense mechanisms.

Koppel also expressed concern with the fragmented national efforts to remedy any sort of crisis state by state.

“We like to think that we’re one country under God, but the fact of the matter is that we are one country made up of 50 separate states, each of which has its own regulations,” Koppel said.

Koppel said the hacking of the United States electrical grid could be similar to the Cold War era threat of nuclear war, and claimed the effects would be similarly destructive. He added that our current dilemma cannot be dealt with in a manner comparable to our Cold War solution of mutually assured destruction, since it is not a viable countermeasure to cyberterrorism.

Koppel said the electrical power industry’s noncompliance with efforts to scrutinize and better protect its computer systems would compromise companies’ ability to make a profit.

“They [the electric power industry] fear re-regulation more than they fear the danger of a cyberattack,” said Koppel.

Koppel maintained a stance of safety over privacy and recognized the hardships and moral ambiguity involved in Internet defense mechanisms given the nature of the technology.

“The Internet was never designed to be defended. It was first designed so that professors could share information across great distances in a matter of seconds,” Koppel said. “Nobody ever imagined, when the Internet was first created, that the time would come when we would be as dependent upon it as we are and that people would try to take it down.”

Maddie Vagadori (COL ’19) and Roey Hadar (SFS ’17), who attended the event, expressed their concern at the issue of cyberterrorism and the lack of attention it is given in the United States.

“Even in the bombardment of media we are faced with every day, this never comes up. To me, this brings to mind the question of why we haven’t heard about this,” Vagadori said.

“He did an excellent job of highlighting an issue that is completely overlooked, yet is one that is still so important to us,” Hadar said. “Like he said, an attack like this could happen any day and we’re not prepared for it. It’s really something I think our leaders should prioritize a little more.”