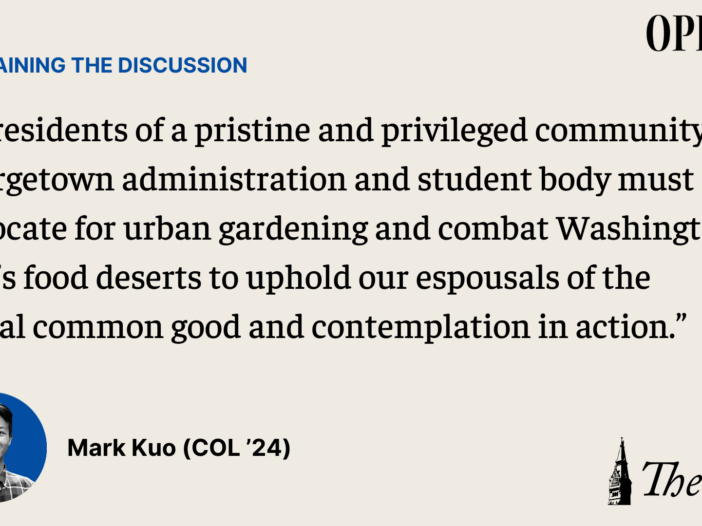 A perplexing phenomenon afflicts residents of Washington, D.C. — despite its metropolitan area’s high median incomes, 10.6% of District residents regularly experience food insecurity, close to the 10.5% national average, and the COVID-19 pandemic has only exacerbated the situation.

One glaring reason is the prevalence of food deserts — areas far from groceries with limited transportation and high poverty rates — which constitute 11% of the city’s total area. Worse, these food deserts predominantly affect Black neighborhoods in a blatant example of environmental racism. Eighty percent of D.C.’s food deserts are in Wards 7 and 8, which have overwhelmingly Black populations, and none are in the upper-middle-class white neighborhoods of Ward 3. In one of the United States’ most green-space-rich cities, fostering urban farming efforts is a missed opportunity for guaranteeing food security.

Pressuring governments to address supply and demand issues helps, but nutritious food provisions through urban gardening programs are an underutilized alternative. The U.N. Food and Agricultural Organization claims urban gardening can meet 20% to 60% of urban and pre-urban household food needs at close to no cost. Cities ought to maximize suitable space for urban agriculture on rooftops, private backyards or other communal spaces. Although D.C. has 35 community gardens recognized by the Department of Parks and Recreation, many experience overwhelming demand and are fractional to the city’s public green space. The city has space for many more private and communal urban gardens, and residents should utilize these spaces to the best of their ability.

Local ordinances are the primary restriction preventing most public spaces, such as parkways, from transforming into urban oases. The L’Enfant Plan, the original conception of our capital’s urban landscape, envisioned the District with spacious streets lined with trees. Adapting its green space to the thriving city today, the plan has massive potential to increase urban agricultural productivity. Though the District generally allows gardening along sidewalks for “beautification of tree space,” it prohibits growing vegetables and edible plants “to protect the health of the tree and the environment.”

These local provisions are antithetical to initiatives supporting low-income communities. While there are legitimate public health concerns, such as pestilence, they hardly originate from urban farming efforts. Researchers agree restrictive ordinances primarily originated from nuisance laws seeking to minimize annoyances in expanding urban and suburban areas. They argue urban farming has health and community benefits, with vegetation and trees benefitting the urban poor with aesthetics, a sense of community, improved property value and decreased crime.

In response to restrictive regulations against urban gardening, some have taken the issue into their own hands. In food deserts, where gardening space is highly available but provisionally limited, guerrilla gardening, which aims to grow plants in public spaces even without explicit permission, profoundly impacts nutrition. Famed “Gangsta Gardener” Ron Finley started his parkway guerrilla garden in 2010 in the massive South Central Los Angeles food desert, landing him in trouble for going against the city code. Later, his movement convinced the L.A. City Council to permit gardening produce on parkways, and his organization, L.A. Green Grounds, provides nutrition to its deprived neighborhoods.

As residents of a pristine and privileged community, the Georgetown administration and student body must advocate for urban gardening and combat the District’s food deserts to uphold our espousals of the global common good and contemplation in action. The administration, in particular, must address deplorable shortcomings in food insecurity, affordability and safety on our campus. Further, as an academic institution, Georgetown and its students are uniquely situated to hold the District and other cities accountable for implementing policies in line with greening and feeding their cities. As Finley says — it is time we turn our soil into our canvas.

Mark Kuo is a sophomore in the College. Sustaining the Discussion appears online every other Friday.