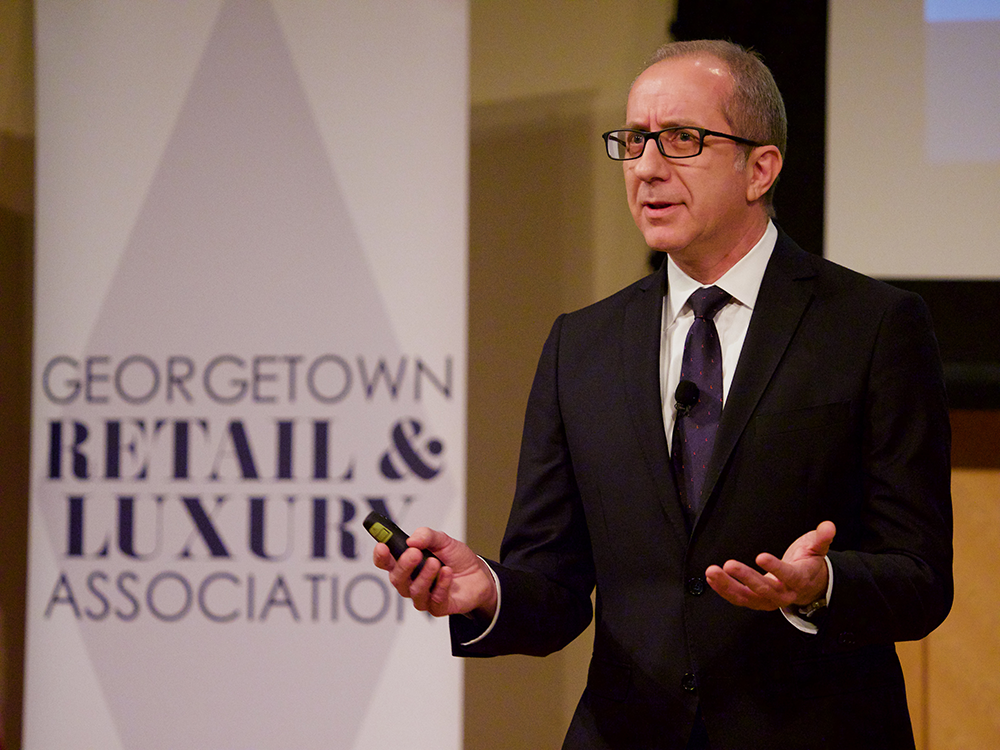 Farmeschi became CEO of Lamborghini Americas in April of this year. Prior to that, he served as the company’s Chief Operating Officer. Farmeschi has worked in the auto industry since 2001, starting with BMW and moving to Lamborghini in 2006.

Since then, Lamborghini has maintained its status as a luxury sports car company by adapting to changes in the auto industry, Farmeschi said.

“If you want to maintain your competitive advantage, since things are changing around you, you need to change,” Farmeschi said.

Futuristic designs and advanced technology are at the forefront of the brand’s marketing strategy, Farmeschi said, while showing videos that portrayed Lamborghini’s role as an innovator and pioneer in the sports car industry.

An important aspect of the company is Lamborghini’s tailored service, the Ad Personam program, which allows buyers to customize their car, Farmeschi said. Buyers can work with designers and engineers to perfect how their car looks.

“We offer our clients, who are peculiar, really special products, produced in 20 units, 40 units,” Farmeschi said. “So in terms of luxury, in terms of uniqueness, they basically have no price.”

Lamborghini operates in 49 markets worldwide, which include 145 total Lamborghini dealers. The U.S. market is the largest for the company, which had almost 1,100 sales in the country last year. Japan was second, with around 400 deliveries made in 2017.

Decisions about the company’s present and future come from its base in Sant’Agata Bolognese, Bologna, Italy, Farmeschi said. Sant’Agata Bolognese is a municipality that is part of the “motor valley,” a region in Italy that is home to many luxury car manufacturers, such as Maserati, Ferrari and Ducati, he said.

The location of Lamborghini’s headquarters situates the company in a place of innovation, according to Farmeschi.

“This is where passion is translated into excellence,” Farmeschi said. “Quality and attention to details is an element that makes Lamborghini a great international company despite small volume.”

Lamborghini’s focus on delivering an experience rather than just a commodity will protect the company from new changes in the auto industry such as the advent of ride-share services like Lyft and Uber, Farmeschi said. According to Farmeschi, Lamborghini will persevere because it sells a type of lifestyle and experience that customers desire.

Farmeschi encouraged students to work hard at what they are passionate about to achieve their goals.

“For me, the key is passion,” Farmeschi said. “If you have passion and engagement and push hard to achieve what you want, you will succeed.”