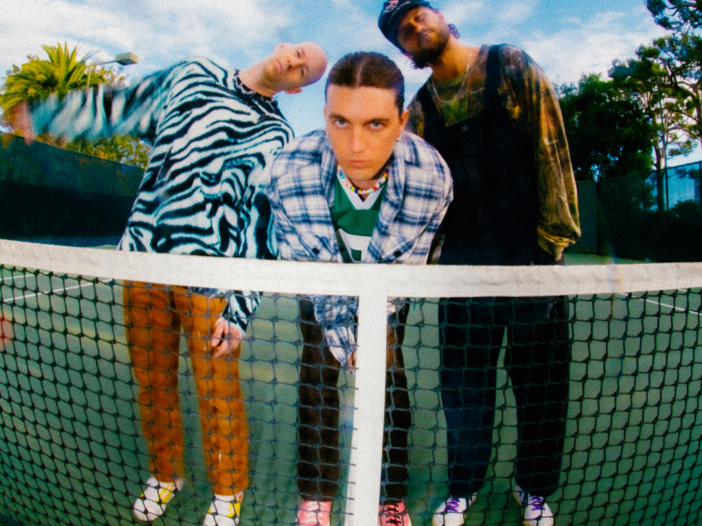 After setting off the fire alarm during its Philadelphia performance the previous night, LANY was ready to bring the same energy to its performance at Washington, D.C.’s The Anthem.

The Los Angeles-based band hit the stage on Saturday to perform its most recent album, “gg bb xx,” which was released Sept. 3, 2021. LANY’s 2014 track “ILYSB” launched the group to stardom, placing the band squarely in the center of romance and breakup-themed pop music throughout the 2010s. The “gg bb xx” tour has been making its way through the United States, United Kingdom and Canada, with pop openers Jake Scott and keshi. The tour’s final stop will be San Francisco in November.

Rising Los Angeles-based pop singer Jake Scott opened the night of festivities with hit songs like “Off” and “CWJBHN.” The dimming lights signaled the singer’s entrance, and the crowd roared with excitement. On stage with nothing but a guitar and one strobe light, Scott’s silhouette was the only illuminated figure in the venue.

From the guitar then came the sweet strumming melody of the song, “Tuesdays.” The intimate lyrics paired with its simple guitar progression quickly turned the bustling audience silent.

After performing his final song, “Favorite T-Shirt,” Scott left the stage, motioning on the second opener of the night: keshi. Also known as Casey Luong, the 26-year-old R&B artist is known for his euphonious instrumentals and smooth vocals.

Simply put, keshi’s performance did not disappoint. Onstage with four standing lights, keshi swayed his body to the beat as he performed his funky hits “beside you,” “somebody” and “talk.” Dispersed throughout these songs were moments of cheeky interaction with the fans, in which he took selfies and accepted song requests.

As keshi walked off stage, the LED light panels were suddenly lit up with red numbers, a sort of countdown clock that culminated with Paul Klein, the main singer of LANY, running onto the stage.

Klein’s silky voice during his opening track, “get away,” filled the venue with warmth and anticipation for the rest of LANY’s songs. Klein’s singing and dancing were backdroped by his extremely talented bandmates: Jake Goss on the drums, Eric “Puff” Scarborough on the guitar and keyboards, and Kim Vi on “everything else,” according to Klein.

After its opening tracks, the band played a progression of its hit songs “Thick and Thin,” “Super Far,” “cowboy in LA” and “never mind, let’s breakup” back-to-back. Like keshi, the use of LED panels in LANY’s performance was dramatically eye-catching, as lights flashed on and off during beat drops and beams of lights scanned the audience between songs, making sure that there was never a dull visual moment throughout the night.

Klein interacted with his audience constantly, soaring across the stage from left to right, onto the piano and even into the crowd. His energy was reciprocated by the audience, who came with posters and flowers to throw at him.

As the band flew through its repertoire, Klein took a moment to address the audience before he performed a slowed-down track, “Thru These Tears.” Reminiscing on his first performance in D.C., Klein shared that seven years ago LANY drove from Los Angeles to The Anthem to perform for a crowd of only four people. Even in the face of such discouragement, however, Klein urged his audience to always remember their worth and how valuable their presence is on earth. “I’m not where I want to be, but I’m not where I used to be,” Klein said, reveling in the band’s progress as well as its future aspirations.

After that sentimental moment, the night was reinvigorated by a few final hits. Upon concluding its final set song for the night, “Malibu Nights,” LANY left the stage. However, the audience was not ready to let the group go.

“Encore, encore!” “LANY, LANY, LANY! ” — a plethora of chants filled The Anthem, making it impossible for the band to reject its fans’ calls for a few more songs. In the dark of the unilluminated stage, the faint shadows of Puff, Goss and Vi appeared, while the lights turned back on to reveal Klein’s return to center stage. Closing the night with its high-energy encore, LANY indeed made Saturday night at The Anthem an unforgettable one.