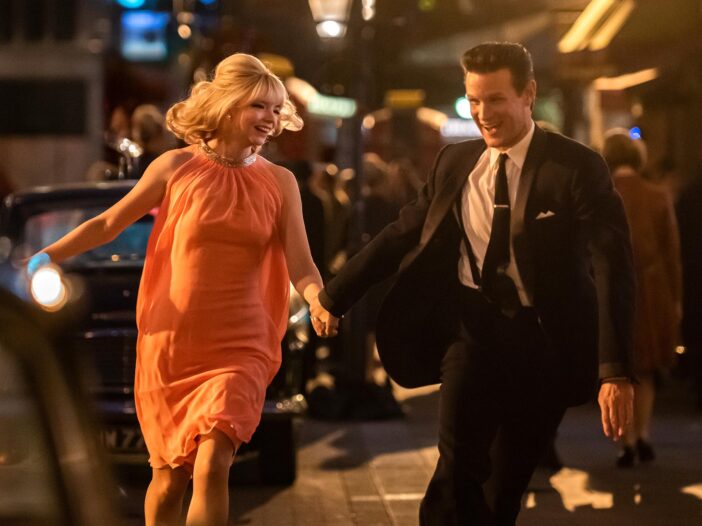 The film sets the stage by establishing its heroine: McKenzie stars as Eloise, or Ellie for short, a young, ambitious fashion-designer wannabe with a gift for more than just sewing. Ellie can see ghosts, a fact revealed to the audience through clever camera work and the use of reflections, in a classic horror movie trope.

The motif of reflective surfaces revealing certain things about the movie’s universe is carried well throughout the film, in subtle ways that play out beautifully. “Last Night in Soho” uses this creative cinematography to depict characters’ experiences and emotions without resorting to overdone close-ups or chunky, expository dialogue.

There’s one scene in particular in which Eloise and Sandie, Taylor-Joy’s bombshell-blonde aspiring singer, seamlessly swap in and out while dancing with Matt Smith’s suave Jack. This dance scene, a sinister parallel to the light-hearted one before, utilizes kaleidoscopic effects in a montage to show Sandie’s descent into inebriation and madness. It’s as disorienting and unsettling as it is dreamy and colorful, perhaps the perfect summation of the film.

As a fixture of Ellie’s 1960s-based dreams, Sandie is by far the most developed and interesting character in the movie. Taylor-Joy brings the vivacious girl to life in a way that makes the whole theater root for her. Sandie is an extremely sympathetic character when the movie opens; however, she devolves into a flat character undeserving of sympathy based on her actions toward the end of the movie.

Nothing is as it seems in “Soho,” as Ellie quickly finds out. Her experience at London College of Fashion is anything but a breeze, although her troubles there are illustrated through a cheap use of the “mean girl” trope. Jocasta (Synnøve Karlsen), Ellie’s roommate, is patronizing and spiteful right from the start. The film makes no attempt to flesh her out or allow her to be anything but an opposing force to “good girl” and “fish out of water” Ellie. Jocasta is neither a foil nor an antagonist, merely a flat, outdated plot device used to get the story rolling.

The other characters in “Last Night in Soho” are barely expanded from their respective tropes, either. Michael Ajao’s John is the corny, sweet boy who likes that Ellie is different from other girls. Terence Stamp plays a creepy old man who the plot only implies might be connected to the drama that Ellie experiences each night when she closes her eyes.

Ellie’s abilities are defined at the beginning of the film, but become detrimental to the logic of the plot because of the inconsistencies in her powers. For example, Ellie’s ghost-seeing talents do little to explain the supernatural happenings of her Soho bedroom, where she enters a bizarre dreamscape.

Many horror movies require a suspension of disbelief from viewers, giving no definite reason why such things happen. “Last Night in Soho” would have benefited from taking this route instead of establishing Ellie’s preternatural skill, a fact that only adds confusion to the mechanics of the story. Additionally, the plot twist at the end of the movie feels a bit cheap. There is little to no foreshadowing, making the multiple twists at the end feel like “gotchas” rather than clever storytelling.
Overall, “Last Night in Soho” is a fun, thrilling film set to groovy 1960s music and packed with a stellar cast. The film is not always camp or tongue-in-cheek enough to make the plot and characterization work, but spending a night in “Soho” is an ace choice for those looking for an escape from reality.