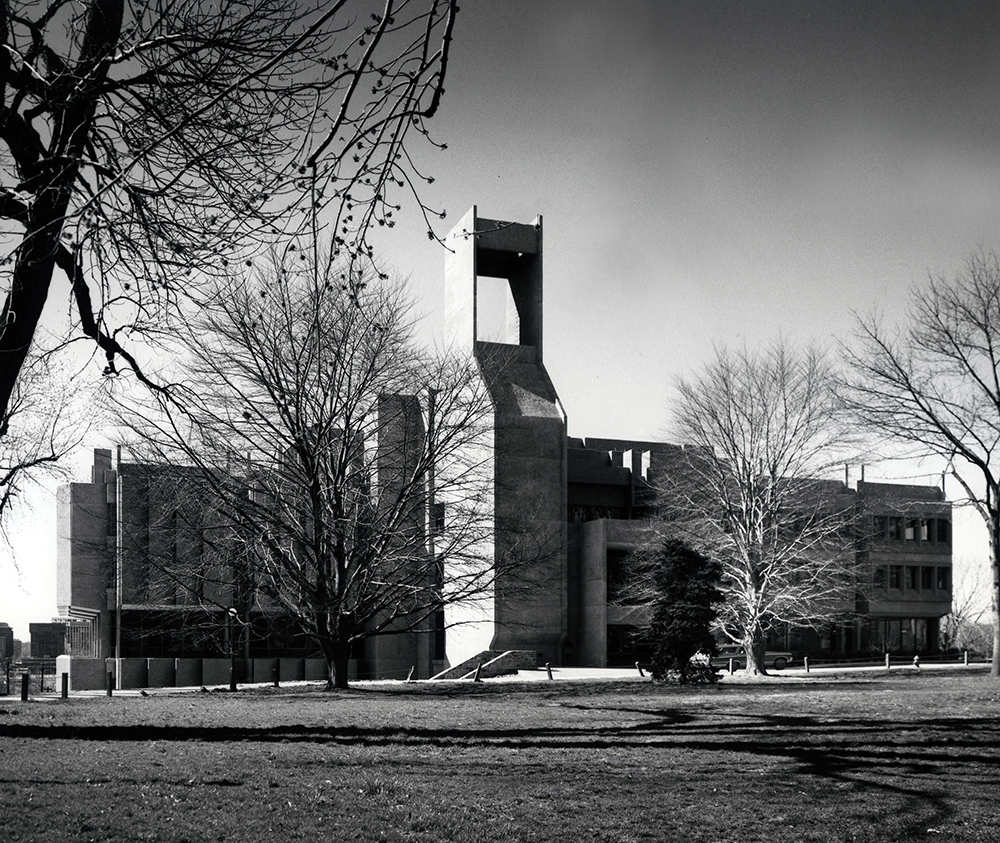 A Google search of the city’s skyline reveals exclusively shots of the National Mall and Tidal Basin. The Washington Monument and Capitol building are the only distinguishing features of a profile shaped by congressionally mandated height restrictions, a conscious decision to accentuate the Mall.

It makes for a dull view of the rest of the city — except if you turn your gaze to the riverfront, where the towers of Georgetown University lend some character to the flat western horizon.

But Swift Potomac’s Lovely Daughter did not always boast the same prominent skyline featured in this publication’s nameplate. Years ago, the Jesuits planned a grand gesture to complete the university’s profile as an elite institution and Washington icon: A massive, regal structure cast in dark gray stone; an award-winning building from one of the world’s greatest architects; a place for students to socialize, learn and admire one of the most beautiful features of their storied campus.

Chances are, you know this building by another name: Lau.

That’s right, Joseph Mark Lauinger Memorial Library — doom of the claustrophobic bookworm, easy target of the amateur architecture critic and mortal enemy of the peppy tour guide — was once revered as a triumph of modern university design, a complement to Healy Hall’s famous spires.

What went wrong? How could a building with such great aspirations become so universally reviled? Lauinger’s past is an illustration of the importance of town-gown relations in the university planning process. Its future, however, offers a distant glimmer of hope through those dense concrete walls.

To call Georgetown’s situation in the late 1960s “dire” would hardly do justice to its precariousness.

Never mind the growing unrest over the war in Vietnam, which would claim the lives of 17 graduates before its end. Forget the ongoing resistance to women’s admittance in the College, even as women became integral participants in virtually every other program and school. Political protests, a floundering capital campaign, the resignation of the university president — all trivial compared to one terrifying reality: Georgetown feared for its very accreditation.

An accrediting team was scheduled to visit campus in 1967, and the university’s facilities remained woefully inadequate for its burgeoning student population. Chief among the administration’s concerns was the aging and undersized library system, which provided merely hundreds of seats for thousands of students, becoming a veritable madhouse during exams.

As Vice President for Planning T. Byron Collins, S.J., put it quite simply in a 1966 Washington Post interview, “We simply have to show [the accrediting team] substantial progress on the new library if we’re going to be accredited.”
Originally sketched out in early 1950s mockups as a stone building in the Collegiate Gothic style — think a boxier version of Copley or White-Gravenor Halls — plans for the library took a drastic turn when the university commissioned architect John Carl Warnecke in 1965.

Warnecke, famed for Lafayette Square and the John F. Kennedy Eternal Flame, among other projects, brought a thoroughly modern vision for the space on 37th and Prospect streets. But as a member of the District Fine Arts Commission and a Georgetown resident, he kept the campus classics in mind while sketching his design.

“The most important exterior aspect of the library is its relationship to the older buildings on campus, especially the Healey [sic] building, which will be its nearest neighbor,” Warnecke wrote in November 1965.

While Warnecke’s descriptions of the building’s “pronounced vertical emphasis” and “dark gray local granite” played up its status as a tribute to Healy, his sketches revealed a building quite dominant in its own right.

But as anyone who read 2010 Campus Plan agreement news over the last three years knows painfully well, there’s much more to large-scale university planning than having a good idea.

The plans for a new library on 37th Street were met with fierce resistance from neighbors and local planning commissions, in a familiar story.

Wary of the potential for the university to take over the western end neighborhood, the university’s neighbors had fiercely opposed a proposal to expand the front lawn’s walkways and green space out to 36th Street. The Fine Arts Commission, from which Warnecke recused himself, suggested the library be built on the current site of Alumni Square, which would effectively stymie any eastward expansion of the main campus. The National Capital Planning Commission and Board of Zoning Appeals concurred, citing concerns that the new structure would detract from the view of the Potomac from Healy. By 1966, hopes for the library on the Potomac that administrators had envisioned were slim.

However, Georgetown was not without public allies in the new project . Washington Post architecture critic Wolf Von Eckardt issued a resounding endorsement of the university’s plan in 1966 — albeit, at the expense of a certain beloved dormitory.

“Warnecke loves [Healy], too, and drew up a somber gray concrete fortress in Louis Kahn Modern,” Von Eckardt wrote upon viewing the sketches. “[It is] a triumph of good taste compared with that hideous orange brick box, called the South Building on the Potomac bluff, which is an insult to nature and architecture.”

After nearly a year of negotiations, during which Warnecke agreed to cut down the planned height of the library’s top tier by 14 feet, each of the zoning commissions acquiesced to the 37th Street location.
Ground was broken on the $6 million project (equal to around $43 million today) in June 1967. The university obtained federal grants to fund approximately one-third of the cost, with the rest coming out of the capital campaign launched midway through the decade.

The university’s financial straits worsened in the closing years of the 1960s, prompting fears that the new library would meet the same fate as Healy — whose gray stone face hides a plain red brick rear, a victim of budgetary constraints. At times, the school risked its credit by running with a deficit as high as $1.5 million (around $10 million today). Departmental funding increases slowed to a crawl as administrators turned to austerity measures to ensure the school did not fall too deeply in the red.

Even the 1968 decision to allow women into the College was made with finances in mind.

“The tuition of 200 or so new students over the next four years would represent a significant increase in revenue,” Georgetown historian Robert Emmett Curran wrote in his 2010 three-volume history of Georgetown.

Yet the new building, admittedly constructed of a cheaper concrete composite, rose in spite of the university’s financial struggles.

The library was finally dedicated in 1970 in honor of Joseph Mark Lauinger (CAS ’67), a Vietnam War casualty and son of longtime Georgetown board of directors member P.C. Lauinger.

The brand-new Lauinger Library — that’s a hard ‘G,’ according to University Librarian Artemis Kirk — received positive reviews from architecture critics and students alike, with the latter appearing to be happy simply to have a functioning library.

Lauinger wasn’t perfect, but it was good. More importantly, it was serviceable, a long-awaited study space for the legions of frustrated undergraduates. But as any current undergraduate knows, positive impressions of the library in the modern era are few and far between.

Brutalism, controversial even in its heyday, has fallen out of favor with most. Evidence of the Brutalist trend dots the District’s federal agency-dominated landscape, as mocked by a recent Buzzfeed article. Despite being adopted by so many of these buildings, from the Federal Bureau of Investigation to the Department of Health and Human Services, the style’s ubiquity has not earned Lauinger a break with students, who often compare it to a prison or military bunker.

Even those charged with pitching the university to prospective students have some difficulty addressing the library.

“When it comes up on tours, I just admit that it’s an ugly building but that its internal configuration is ideal for the needs of all different types of students,” said Kevin Brosnan (COL ’16), a tour guide for the Blue & Gray Tour Guide Society.

Kirk, a fan of her workplace, is not sure why exactly the building finds itself the subject of so much derision. She suspects that the building material might have an outsized impact on the library’s appearance.

“Perhaps Lauinger would look different if it had a stone exterior, rather than the composite,” Kirk said. “Even if Healy is dirty, it doesn’t look dirty. Even if Lauinger is clean — which it has been — it doesn’t look clean.”

The exterior is far from Lauinger’s only problem. The “concrete fortress” Von Eckardt spoke of lovingly appears to be just that — a fortress. The library remains a sunless environment for anyone seeking an open computer or group study area on the first or second floors, while gorgeous views of the Potomac on higher floors are wasted on private meeting rooms.

Structural design aside, one of the most common complaints about Lauinger mirrors that which provoked its original construction. There simply is not enough space in the 1,800-seat structure to hold all the students who want to study there. Georgetown has, once again, outgrown its library.

“We’ve become a research university,” Kirk said. “We’ve added graduate programs galore. We’ve more than doubled or tripled the size of the student body. The building, which was designed in a different way for a very different population, could not have anticipated what was going to come.”

The confluence of dated design and massive population growth has made the library a claustrophobic study environment for many undergraduates. Despite this, Lauinger is still the most-frequented study spot on campus, and those who use the library find that its employees do not adopt the same foreboding appearance. The library’s 2009 student survey garnered hugely positive reviews of its services, and library staffers have earned a reputation among some student groups for their helpfulness.

Dan Silkman (COL ’15) has worked with the library as part of the Georgetown University Historical Society, which he helped found. The fledgling group meets with staffers from the archives monthly to learn about some aspect of the university’s history and discuss the promotion of awareness among the university community. Hearing Silkman talk about Lauinger, you would hardly know that he does not like the building itself.

“The staff at the library is underutilized and totally underappreciated. People complain about the library atmosphere, and never give the staff a chance,” Silkman said.

All-stars though they might be, Kirk and her staff work in an arena many consider painfully outdated.

Renovation plans are in the works. The university commissioned architecture firm Bowie-Gridley to help establish a master plan for the library in 2009, which aims to emphasize light and open space, while somehow preserving the basic Brutalist structure. An addition that will nearly double the capacity of the library mimics another feature of the Georgetown skyline — the terraces of Village A. Sketches depict a thoroughly modern interior, complete with hallways stretching from Healy Lawn to the riverside and massive windows overlooking the Potomac.

While the building will of course retain its Brutalist style, it will be transformed “into something that’s still Brutalist, but says ‘We’re now in the 21st century,’” Kirk said.

Other major projects, including the construction and renovation of new residence halls in accordance with the 2010 Campus Plan agreement, stand above the Lauinger renovation on the university’s to-do list. Real changes might not come until the next capital campaign, which Kirk expects to be completed around 2025.

For now, the library staffers are making do with what they have.

For Kirk, that means taking student input seriously and doing what she can to make more open study spaces, including helping to establish Midnight MUG in 2003 with Students of Georgetown, Inc. She sees it as her job to ensure the building is as welcoming a place as possible for students.

“You’re all there for a similar purpose. … There’s something comforting about a place where you can go where you share some element of camaraderie — even if you never say a word to anybody,” Kirk said. “The library provides that.”

Pat Curran wrote this piece in the spring semester of his senior year. He graduated in 2014.