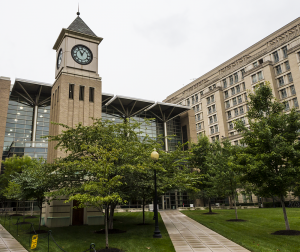 Initially, the firm will consist of six lawyers, all of whom are GULC students set to graduate this year. Employees will be paid $20,160 for their efforts over a 15-month period, but donations and other revenue could increase that salary to over $40,000. Applications for the firm, open exclusively to GULC students, closed last Friday.

The firm will focus on providing legal services for lower-income clients, charging approximately $50 per hour.

Krantz said the basic idea for a ‘low bono’ firm, one that provides discounted legal services, came from an observed lack of quality legal aid for those who cannot afford the average cost of an attorney, which can range from $200 to $1,000 per session. In family court, 90 percent of citizens choose to represent themselves due to a lack of sufficient funds to pay for a lawyer.

“There are probably well over a hundred thousand people in the D.C. area who have very little income but don’t qualify for legal aid,” Krantz said. “The three organizations, Georgetown, DLA Piper and Arent Fox, all feel that it’s really important to make sure that lawyers are available to help this group.
GULC Dean William Treanor added that D.C. Affordable Law Firm targets a large, underserved demographic in the Washington, D.C. area.

“The ‘low bono’ law firm that we are creating will provide legal services at a reduced rate for people who earn two to four times the poverty level,” Treanor said. “That’s an enormous amount of people. In Washington, D.C., alone, that’s 100,000 people.”

Marc Fleischaker, a partner at Arent Fox who helped bring the deal together, explained that the majority of people with moderate incomes, which he defined as anywhere from $20,000 to $90,000, cannot afford legal coverage. The members of this group fall between those who can generally afford legal coverage and the individuals who have a low enough salary to qualify for donated legal aid.

“Most people with moderate incomes … can’t afford to pay what lawyers cost,” Fleischaker said. “It’s just not a fair and balanced contest.”

GULC professor Peter Edelman, who has been active in working to increase legal service accessibility for lower income citizens, also helped with the development of the nonprofit firm. After discussing the matter with Treanor, Edelman approached six law firms and gauged their interest in creating a ‘low bono’ firm. Arent Fox agreed to help.

When Krantz heard of Edelman’s efforts, he asked his former law firm, DLA Piper, to also become involved with the project. They agreed to join with Arent Fox to provide advice and training for the new lawyers.

Arent Fox will be working in close capacity with each of the new lawyers, and will provide the nonprofit firm 10 lawyers, partners and associates, as well as a few staff members, for training and mentorship. Additionally, Arent Fox will provide a conference room for the firm and an office for each attorney.

“We’re involved in a lot of different ways,” Fleischaker said. “Hopefully, [we can] help teach the new lawyers how to be successful.”
Edelman said the assistance of Arent Fox and DLA Piper is a unique aspect of GULC’s partnership.

“There are a few somewhat similar programs sponsored by [other] law school[s],” Edelman wrote in an email to The Hoya. “[B]ut there aren’t any that we know of that involve a partnership between a law school and major national law firms.”

Treanor also emphasized how unprecedented the project is and praised Edelman for his leadership in bringing the nonprofit firm together.

“This is the first firm of its kind,” Treanor said. “This has more training than any of the other models and the participants will also get a graduate law degree.”

In addition to Krantz’s role as executive director, the program will also consist of a three-member board for the firm. The board, which has yet to be selected, will include representatives from the GULC, DLA Piper and Arent Fox.

Krantz described his position as akin to a new full time job in addition to his responsibilities as a professor, but added that he is passionate about the project.

“I’m really looking forward to taking the challenge on,” Krantz said. “I’m [running the law firm] on a pro bono basis because I really care about it.”

GULC faculty will review the applications to the firm in an initial screening process, but the final decision will be left up to the board of the firm in the coming weeks.

“We’ll be reviewing all those applications,” Krantz said. “We’re sure because of the high quality of GU law students, we’re going to have a very strong group of lawyers.”

Krantz highlighted his excitement at seeing how the law firm will function and expressed hope that other law schools will be inspired to develop similar nonprofit firms.

“What we’re starting, which is this nonprofit law firm, is a pretty unique undertaking,” Krantz said. “We think it’s going to be important here in the District, and we think it could serve as a model for others.”