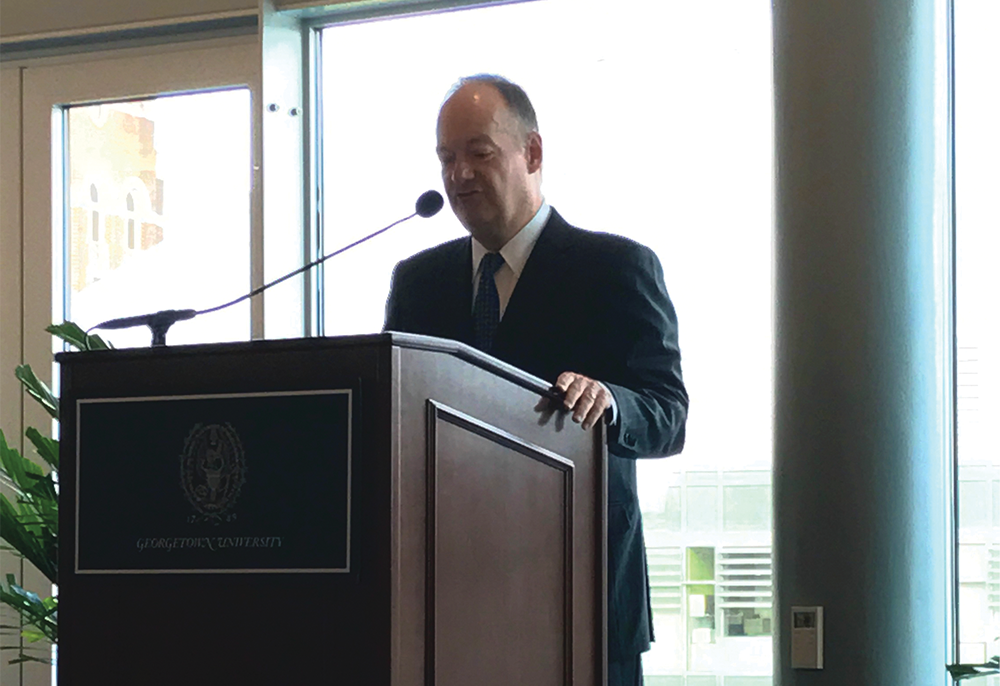 The Health Justice Alliance, which began research work in 2016, works to provide legal assistance and advice in addition to medical care for low-income residents across the District. University President John J. DeGioia emphasized the importance of joint work between GUMC and GULC to panel attendants.

“There is an undeniable urgency to this work, to address pervasive and persistent health disparities facing our community today, disparities influenced by factors relating to food security, housing, education and access to healthcare, medical and legal challenges that demand collaborative, interdisciplinary, and community-based solutions,” DeGioia said.

Moderated by Edward Healton, GUMC’s executive vice president for health sciences, the panel was composed of representatives from both GUMC and the GULC, including Yael Cannon and Vicki Girard, GULC professors and co-directors of the Health Justice Alliance; Christopher King, director of the School of Nursing and Health Studies’ master’s degree in health systems administration; founding medical director of the Health Justice Alliance Eileen Moore; and Oswald Reid (MED ’20).

GULC Dean William Treanor introduced the panel, remarking on its three major goals of addressing underserved communities in the District, training the next generation of doctors and attorneys to work collaboratively, and performing research to evaluate best practices for future medical-legal partnerships.

“The Health Justice Alliance embodies the Georgetown ethos, the Jesuit ethos by fostering collaboration between lawyers, medical professionals and students from both arenas to care for the whole person,” Treanor said.

Moore said her patients inspired her to implement a medical-legal partnership at Georgetown. Specifically, after attempting to help an asthmatic patient whose condition was exacerbated by a broken window in her home and was receiving no assistance from landlords, Moore said she realized patients need legal help.

“So out of sheer desperation I went to a friend of mine who has those magic words like ‘esquire’ after her name,” Moore said. “Within a week there was glass in that window. So I very quickly came to realize the high, high value of the medical-legal partnership aspect of the Health Justice Alliance.”

Cannon credits Georgetown’s affiliation with healthcare providers across D.C. through the MedStar Hospital System as one of the strengths of the program, as it affords students the opportunity to work directly with populations affected by poverty.

“Georgetown is pretty remarkably positioned for this type of partnership. Both the law school and the medical center have an incredible presence in low-income communities in D.C., and we realized as we started talking across our campuses that we can do this work better if we do it together,” Cannon said.

The program focuses on underserved populations in order to help address and lessen racial health disparities in the District, according to King.

Black men in the District are three times more likely to die from prostate cancer than white men, and black women in the District are 1.5 times more likely to die from breast cancer than white women, according to a July 2016 report to the D.C. Commission on African American Affairs to which King contributed.

“I tell my students that we can provide the best medical care in the world, but we can’t begin to address everything unless we rethink how systems and institutions are designed and rethink them in a holistic way,” King said.

Cannon added that the program works to achieve its goal of training the next generation of doctors and lawyers by helping students understand how to assess medical and legal needs from the beginning of their work with patients or clients.

“When these patients who are living in really extreme poverty come to the doctor, a med student goes into the patient room, does a regular checkup, checks for vitals, but can also check to see if there are unmet legal needs,” Cannon said. “If those needs are flagged, our law students can wrap that family in legal services and work as a team to problem-solve for these families and try to get them healthy.”