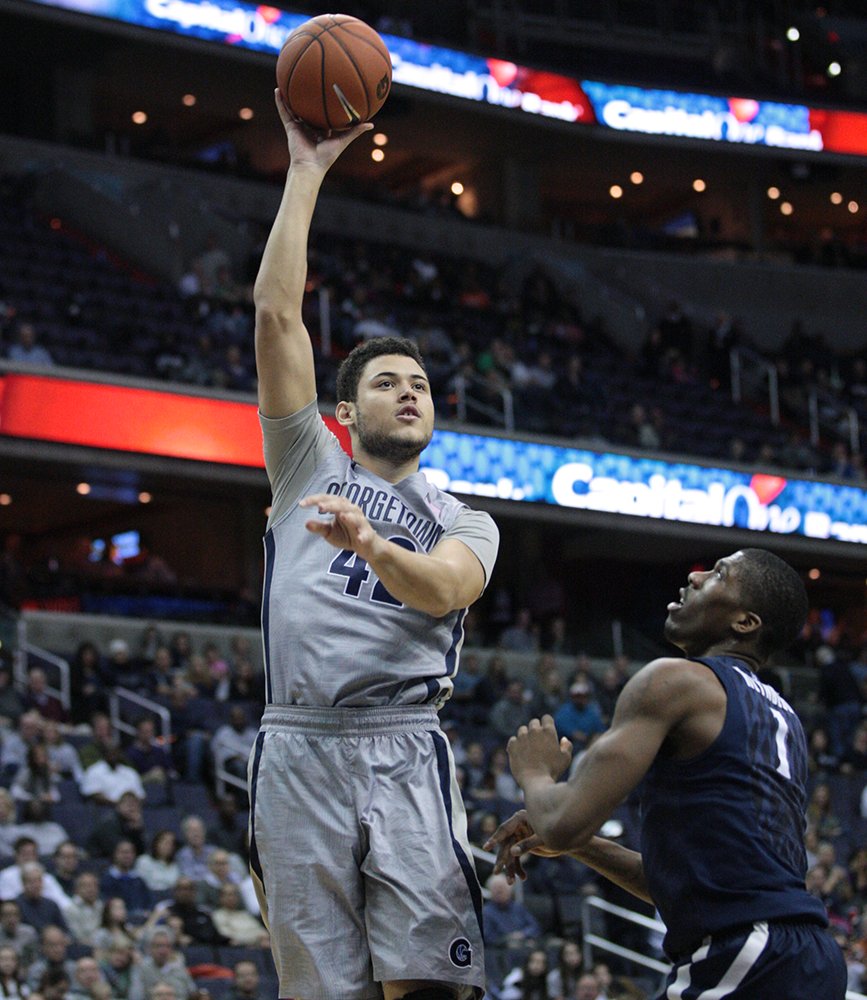 When ESPN or The Washington Post discuss Georgetown men’s basketball, they mention the same set list: senior center Josh Smith, senior guard Jabril Trawick, junior guard D’Vauntes Smith-Rivera, the talented freshman forward recruits Isaac Copeland and L.J. Peak and of course Head Coach John Thompson III. With a roster of 14 players, however, the team will call on role players as much as it will on established stars.

“We didn’t really have that many bodies last year, and I think that this year is going to be a totally different situation,” Trawick said. “The freshman class along with the veterans [add] depth. We have got a lot of depth.”

These role players will play their parts in all facets of the game, if only for a few minutes. Smith-Rivera and Trawick are close to guaranteed to start in the backcourt. Smith has the center spot claimed as his own as long as his conditioning is up to the task, so junior center Bradley Hayes will likely see only limited minutes.

Senior forward Mikael Hopkins averaged only 20.8 minutes a game last season in a low-post rotation that was missing its centerpiece player — Smith — for much of the year. Hopkins’ minutes were curtailed due in part to his high turnover rate and frequent foul trouble. Hopkins fouled out six times and had the third-most turnovers on the team. With Smith returning and freshmen forwards Paul White and Copeland in the rotation, Hopkins may see a diminished role, which would likely contribute to an even smaller role for Hayes.

Hopkins is confident about the upcoming season and is determined to keep his starting role.

“I worked on getting a lot stronger and on getting more versatile. Just being a leader, being one of the [four] seniors,” Hopkins said. “I really know the offense now. I know everything that everybody on the court is supposed to do.”

The 7-foot Hayes averaged just 3.2 minutes a game last year, despite being the tallest player on the roster. Like with Hopkins, Smith’s return will limit Hayes’ opportunities on the court. Even with a now-crowded picture at the center position, Thompson sees a chance for Hayes to show great improvement in the 2014-2015 season.

“[Hayes] had a very good summer. He got hurt the other day, but he is playing well now. Hopefully, it will just be a couple days and he will be back. He’s got a chance [to be the most improved],” Thompson said.

Smith-Rivera and Trawick are both surefire starters in the backcourt. The pair averaged 35.5 and 26.3 minutes last season, respectively, and with Markel Starks’ graduation, the two will likely see even more of the court. The two reliable guards cut potential playing time for then-freshman forward Reggie Cameron last season, something that may continue into 2014 and 2015.

Cameron averaged 13.3 minutes and 3.8 points a game last year. The sharpshooting forward appeared in all but one game, but he will face more competition from the talented freshman class. However, he now has a year of experience and an offseason of work to help cement his spot in the rotation.

“I feel like a new player. It’s a new year, I’ve got a fresh start, and I’m really confident and ready to play,” Cameron said. “I think I’m stronger and in better shape than I was last year.”

Other players who will play limited roles include junior guards Riyan Williams and David Allen. Allen appeared in 10 games, but only for a total of 17 minutes. The walk-on played just one minute last season but will hope to contribute more as an upperclassman. Williams played just one minute of one game last season, so barring an injury, such as Trawick’s broken jaw suffered against Providence  that sidelined him for five games, he will continue to be a fringe player.
However, Thompson is not ruling out playing time for anybody.

“We’ll see [how much Williams contributes]. We’ll see. I don’t know. Like everybody on the team, you’ll see. He works hard in practice,” Thompson said.

Injuries and roster shake-ups are inevitable over the course of a season. Any team needs depth and quality minutes from a variety of players in order to be successful. Hayes and wing players Cameron, Allen and Williams may not be starting the year as stars, but they will have an opportunity to make their mark on the season.