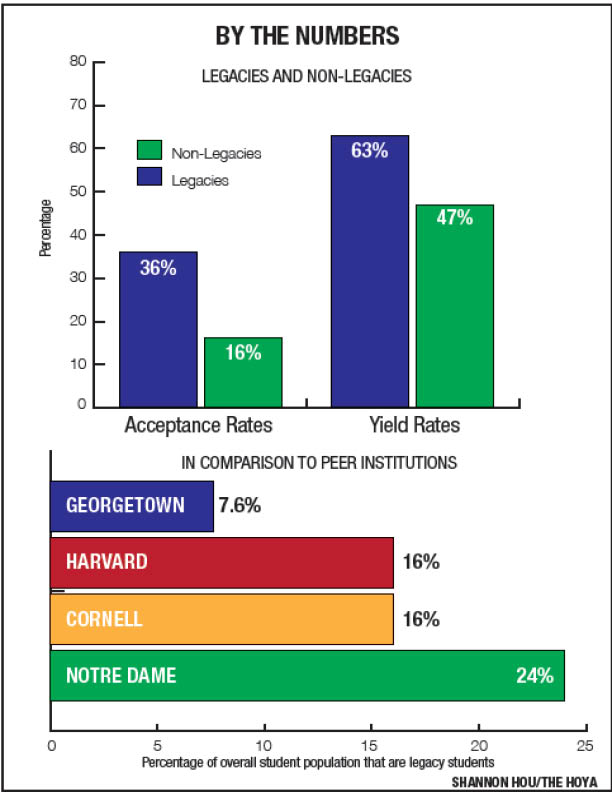 Amid recent challenges to affirmative action in Texas, California and Michigan, the common practice of legacy preference, which advantages the children of alumni during the university admissions process, has also been called into question, prompting debate over its benefits and potential concerns.

Dean of Undergraduate Admissions Charles Deacon said that the legacy preference policy does not give a significant weight to the applicant, estimating that about 80 to 90 percent of legacy students were accepted without consideration of legacy status.

“The quality of credentials [of legacy students] is very close to the average,” Deacon said.

According to Deacon, Georgetown’s legacy preference policy originated in its current form in the 1970s as a means of continuing family tradition, but has since evolved to encourage alumni giving as well as to bring a positive environment to the Georgetown community.

Deacon attributed this consistency to Georgetown’s decision not to recruit based on legacy preference.

“It’s been pretty consistent, and I think largely that’s because we don’t do anything special to encourage alumni kids to apply,” Deacon said.

Deacon stressed that the degree of the parent’s previous involvement in the Georgetown community plays a heavy role in determining whether this “tip” is given.

“Legacy consideration is provided favorably to those who have a long established track record of support for Georgetown since they graduated as opposed to those who have the potential to be generous,” Deacon wrote in an email.

Compared to many of its peer institutions, Georgetown boasts a lower percentage of legacies in its student population.

At the University of Notre Dame, which openly recruits its legacies, legacy students made up 24 percent of the Class of 2016, according to an article in The Observer, the university’s student newspaper, in April 2012.

Similarly, legacies made up 12 to 13 percent of the undergraduate population at Harvard University, according to a May 2011 article in the Harvard Crimson. Harvard’s legacy admission rate of 30 percent was over quadruple the regular decision admission rate at the time.

The Cornell Daily Sun reported in 2013 that legacies made up 15 to 16 percent of Cornell University’s undergraduate population.

Though legacy preference is common practice among private universities, Richard Kahlenberg, author of the book “Affirmative Action for the Rich: Legacy Preferences in College Admissions,” said that, according to his researchers, legacy preference does not tend to produce any net gain in alumni donations. Although there is a spike in alumni giving while the alumnus’ children are in high school, Kahlenberg claimed this increase is balanced by the alumni who stop donating completely in the event that their child is rejected.

In an op-ed in The New York Times in May 2013 titled “Affirmative Action for the Rich,” Kahlenberg voiced his opposition to the policy, decrying it as inherently “un-American” and particularly privileging affluent families.

“In other walks of life, we would consider it absurd to add points to a candidate’s application based on lineage, and legacies in higher education may soon come to an end as well,” Kahlenberg wrote in the op-ed.

He said that legacy preference becomes especially problematic in cases where affirmative action policies have been challenged, such as in Texas and California.

“If we are supposed to be basing decisions on merit and not on skin color, how on earth can one justify counting — or asking the question — not how well did a particular student do, but did your parents go to this college? It seems irrelevant to any question of merit,” Kahlenberg said.

Dennis Joyce (MSB ’18), whose parents both attended Georgetown, acknowledged the stigma that legacy students face as having had an easier lot in the admissions process.

“For me I feel kind of an onus because I do know the stigma,” Joyce said. “So I feel like a little bit of a burden to do well.”

“I worked my butt off to get here and become a part of this community and my family’s Georgetown legacy, and I never for one second banked on the fact that legacy alone could get me in,” Foley wrote in an email to The Hoya.

Despite this contention surrounding legacy preference within the admissions office, Deacon emphasized the role that legacies play in strengthening the sense of spirit and unity in the Georgetown community.

“I think they bring an enthusiasm for the school, a knowledge of the school, when they get here. They create a positive environment at the outset ceremony, and for people who didn’t go here, they help them learn more about Georgetown as they become friends, meet their families,” Deacon said.

Emma Barnitt (MSB ’17), whose parents met at Georgetown and began dating at their five-year reunion, said that Georgetown spirit always played a large role in her household growing up.

Kevin DePaulo (COL ’17), whose parents also met while at Georgetown, shared similar stories of growing up.

“It was definitely the college in my house growing up, like watching the basketball games growing up, the whole family was Georgetown fans, putting Georgetown stuff on the walls, Georgetown apparel,” DePaulo said.

Barnitt joked that she hopes to continue her family’s legacy at Georgetown with her own children someday.

“My kids are going to go here,” Barnitt said.