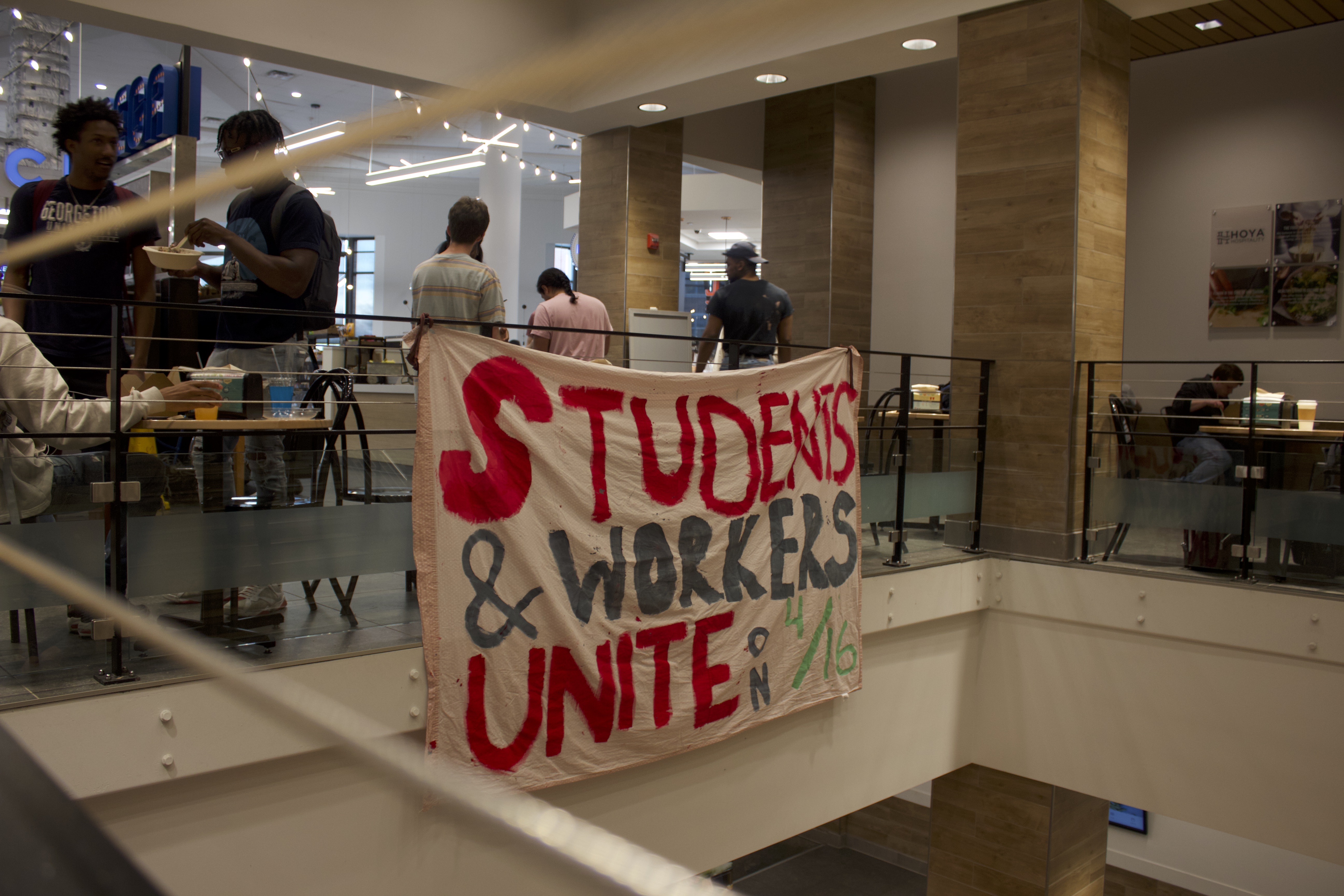 Campus food service workers are preparing to picket and rally outside O’Donovan Hall on April 16 after months of protest and negotiation with campus food service provider Aramark. Workers’ complaints include low wages, short break times and disrespect from their managers, according to several workers who requested anonymity because of concerns about their employment.

Student activists from the Georgetown Solidarity Committee hung a banner in Leo’s in support of food service workers on April 10. Groups of about 30 workers had previously protested in Leo’s on Feb. 27 and  April 4. The latest contract between Aramark and the campus food service workers, who are represented by labor union Unite Here, expired in December.

The two parties have still not agreed to new terms several months after the contract’s expiration. Aramark met with the delegation of workers to negotiate a new contract April 5. Aramark respects workers’ right to protest, according to Karen Cutler, Aramark vice president for communication and public affairs.

“We respect the right of our employees to demonstrate and look forward to continuing to bargain in good faith,” Cutler wrote in an email to The Hoya.

Workers plan to strike April 16 if a resolution is not reached within the week, according to Joshua Armstead, vice president of the D.C. chapter of Unite Here Local 23.

“We are hoping to have a fair contract by the end of this week,” Armstead wrote in an April 8 statement to The Hoya. “If not, join us outside the dining hall on the 16th of April for a demonstration.”

Georgetown’s food service workers officially unionized in March 2011 with Aramark’s approval and agreed to a three-year contract with Aramark 10 months later. As that contract approached expiration in February 2015, Aramark workers and student activists from GSC marched together from Sellinger Lounge to Leavey Court to protest poor working conditions.

After those demonstrations, workers negotiated a contract with new benefits, including a 50-cents-per-hour raise and cheaper health care coverage for workers. However, food service workers continue to cite poor working conditions, such as insufficient vacation time and low wages, according to a food service worker who requested anonymity because of concerns about their employment.

“We want longer vacations and a pay raise. Two weeks isn’t enough,” the worker said. “We have kids.”

Breaks for campus food service workers are limited, according to another worker who also requested anonymity for employment concerns.

“If you work 5 hours, you don’t get a break,” a food service worker said in an interview with The Hoya. “When you do get a break, it’s 30 minutes.”

Cutler said that the collective bargaining agreement between Aramark and workers allocates breaks based on the amount of time worked each day.

A third worker suggested that food service workers only receive complimentary meals in the downstairs section of Leo’s, which means they have less access to hot meals if their break falls between 2 p.m. and 4:30 p.m., when the Fresh Food Company downstairs transitions from lunch to light lunch.

“My doctor said I’m not eating enough and that I don’t get enough square meals,” the worker said. “I can’t eat enough. My break is at 3 p.m., and they only let employees eat downstairs. They only serve hot meals until 2 p.m. Workers either have to pay for their meals upstairs; the meals that we make, or try and turn the salad bar into a full lunch.”

Cutler said that workers have access to hot food between 2 p.m. and 4:30 p.m.

“All team members, including management employees, have the opportunity to dine in the residential dining facility,” Cutler wrote. “Between 2p and 4:30p hot options are available along with a variety of other options.”

Cutler did not indicate whether employees must pay for meals in the upstairs dining section, however.

Prior to hanging the banner in Leo’s on behalf of food service workers, GSC also hosted a Feb. 14 open forum about ongoing labor contract negotiations. The group is pushing for meaningful wages and benefits for Unite Here workers, according to a GSC statement.

“We are in complete solidarity with the Unite Here Local 23 workers at Georgetown fighting for a contract that will allow them to provide for themselves and their families,” GSC wrote in a statement to The Hoya.

University officials at American University decided to look into alternative food service providers to Aramark after a student-led town hall and protest in response to price increases in a proposed meal plan, according to The Eagle, AU’s campus newspaper.

New York University chose not to renew Aramark’s dining contract in light of multiple protests, including a 155-hour long occupation of NYU’s main library, according to Washington Square News, NYU’s campus newspaper. The protests centered on Aramark’s role as a food service provider to the private prison industry.

Georgetown renewed Aramark’s campus food service contract for 10 years in November 2016. The university is not involved in current contract negotiations between Aramark and Unite Here workers, according to a university spokesperson.

“While Georgetown is not part of the ongoing negotiations between Aramark and Unite Here, we are committed to ensuring both entities negotiate in good faith and reach an agreement that continues to adhere to university policies, including the Just Employment Policy,” the university spokesperson wrote in an email to The Hoya.

GSC members, however, believe the university is not genuinely interested in the needs of workers or students.

“The university is not concerned with the knowledge or experiences of its students or with the ethics of its subcontractors,” GSC wrote.  “It is more interested in making profitable decisions, even at the cost of its morals; choosing Aramark as our food provider was such a decision.”

Though Georgetown has not been involved in the ongoing negotiations between Unite Here and Aramark, the university has established a protocol for employees to file complaints about violations of the just employment policy.

“We have outlined a clear and accessible protocol for contract employees to notify the university of any concerns related to the Just Employment Policy,” a university spokesperson wrote in an email to The Hoya. “This includes the Georgetown University Compliance Helpline, a safe, and anonymous if desired, way to report problems or raise questions or concerns.”

Aramark also has a toll-free employee hotline for anonymously reporting workplace grievances that is managed by a private third-party provider, according to Cutler.

Students will need to place pressure on Aramark on behalf of food service workers since the university is unlikely to act, according to GSC.

“In this situation Aramark is the one negotiating with workers and our job as students is to support them in their efforts and put public pressure on Aramark,” GSC wrote in an email to The Hoya. “Based on our experience, we don’t think change will come from the university.”

Several workers feel mistreated and intimidated by Aramark management, according to two workers who requested anonymity for employment concerns.

“They don’t care about us at all and are intentionally intimidating,” one worker said. “We will keep fighting until we get our rights.”

Aramark has not received any reports of abusive conduct by the company’s management, according to Cutler.

Disrespect from management is an even greater concern than wages for one food service worker, however.

“This isn’t just about money. It’s about respect,” the worker said. “We’re all going through a lot and we’re treated like we’re not even human.”