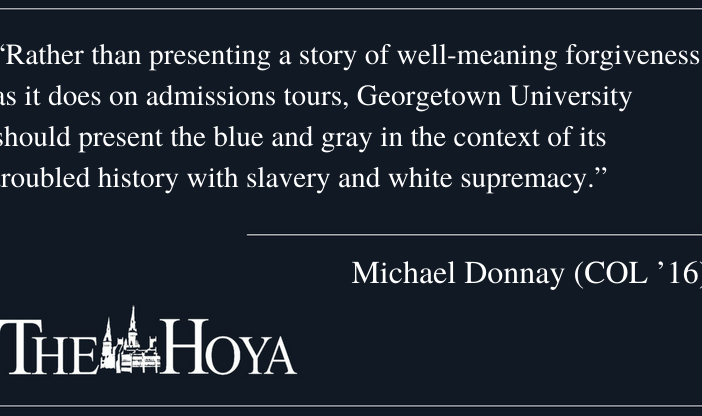 As statues honoring leaders of the Confederacy fall across the county and the United States again reckons with the way it memorializes its white supremacist past, Georgetown University must do the same. As historians, including those working at Georgetown, have pointed out, Confederate statues are not about history — they are part of a consciously constructed narrative that privileges the viewpoint of former slaveholders. It is beyond time for the university to confront one of its own central narratives: the false idea that the blue and gray of its school colors represent an admirable symbol of postwar unity.

In the fall of 1876, as Georgetown’s crew team was adopting blue and gray as its official colors, Reconstruction was dying in the South. As a result of a postelection agreement between Republicans and Democrats, federal forces withdrew from the former Confederate states and control returned to local, white supremacist governments. The men leading those governments were in many cases the same men who had proudly worn gray on the battlefield only a few years earlier. They were the same men whose sons had left Georgetown in record numbers in the summer of 1861 to fight for their right to own human beings.

The university must reckon with the dark fact that it welcomed back the sons of former slave owners a century before the sons of former slaves — let alone their daughters — were allowed to walk through the front gates as students. The Georgetown community must acknowledge that the university adopted, and continues to perpetuate, a narrative that places the unity of white Americans before the safety and wellbeing of Black Americans. Every time a Georgetown team takes to the field or the flag flies above the front lawn, the joining of those two colors clearly signals that forgiveness for one group of Americans is more important than justice for another.

I urge the university to examine its commitment to the narrative of unity surrounding the school colors. Rather than presenting a story of well-meaning forgiveness, as it does on admissions tours, Georgetown should present the blue and gray in the context of its troubled history with slavery and white supremacy. Perhaps blue and gold, the colors worn by the Union forces, including thousands of Black soldiers who fought for their freedom as part of an army that denied them equal pay and dignity, would be a more fitting tribute to that period in U.S. history and the values Georgetown holds dear.

The stories we choose to tell about ourselves underpin the culture and identity of our institutions. Now is the time to confront this particular story and the narrative it preserves.

Michael Donnay graduated from the College in 2016.