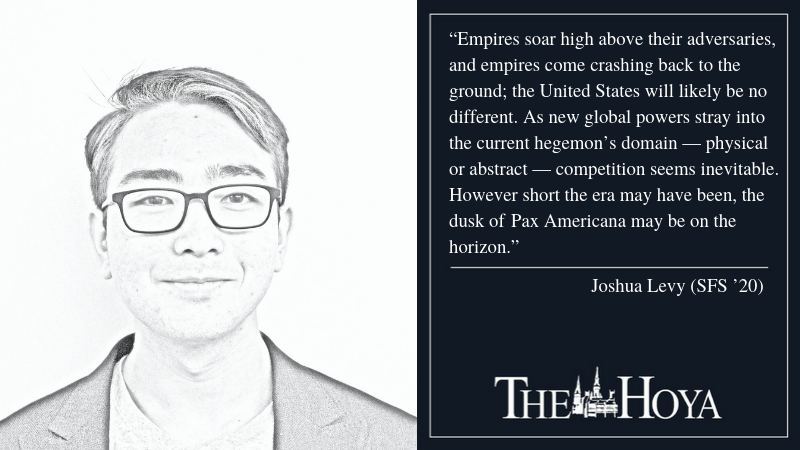 Bald eagles can be fiercely territorial birds. When challenged, they lock talons with their foes high above the earth and together plummet toward the ground below. In this aerial game of chicken, the first to let go flies away in humiliating defeat. When there is no decisive winner, the two avian combatants fly higher and engage in yet another deadly spiral. For an eagle, any challenge can be catastrophic.

Similarly, empires soar high above their adversaries, and empires come crashing back to the ground; the United States will likely be no different. As new global powers stray into the current hegemon’s domain — physical or abstract — competition seems inevitable. However short the era may have been, the dusk of Pax Americana may be on the horizon.

In the wake of World War II, the United States, by far the world’s most powerful country, divested some of its relative power by binding itself to the rules of multilateral institutions. Though the United States had, and still has, disproportionate sway over the United Nations, International Monetary Fund and World Trade Organization — among a host of other international bodies — it intentionally tied one of its hands behind its back, hoping the rules of those institutions would limit the capabilities of future challengers. Thus the contemporary U.S. empire has become less one of overt dominance and one more of subtle influence.

As the sun set on the 20th century, the dissolution of the Soviet Union left the United States as the victor in what was posed as a civilizational struggle against communism. The United States’ grand strategy had, in the eyes of many, paid off. But in the 20 years since, audacious claims about the inevitable triumph of the U.S.-led order may have been hasty. Now, as new adversaries wade into the fray, the U.S. empire is in retreat.

This phenomenon did not begin with the election of President Donald Trump, though it has certainly accelerated under his tenure. Last month at the UN General Assembly, Trump shrank from the challenge of global leadership, excoriating the international engagement and claiming the United States “reject[s] the ideology of globalism.” Trump’s trade war with China and other disputes with partners undermine the global trading order. His ridicule for NATO allies makes the United States look ever more isolationist. Trump’s withdrawal from the UN Human Rights Council worries global commentators about the U.S. moral compass, long a lodestar for the international community.

While those invested in the post-World War II international order deliberate how to shoulder a global burden, challengers to that order are rushing to fill the void the United States is leaving.

With its Belt and Road Initiative, a host of infrastructure and development schemes, China looks to extend its influence across the Eurasian landmass and to East Africa. China watchers see the BRI as an attempt to tempt developing countries into Sino-centric orbits. Overseas Chinese infrastructure investment is expected to approach $4 trillion, and Beijing is creating new courts of international arbitration to displace the WTO’s dispute-resolution mechanisms. Even at the height of its power in international institutions, the United States maintained at least a facade of multilateralism. Chinese planners have no qualms about dictating terms to China’s subordinate states without consulting the opinions of perceived meddlesome foreign powers.

Scholars who study the rise and fall of great powers claim their transition is marked by conflict. Analysts worry that the whispers of such conflict can be heard again, as an ascendant China becomes more forceful in the South China Sea. In violation of the UN Convention on the Law of the Seas — an international agreement from which the United States’ signature is notably absent — China is using its fast-growing blue-water navy to muscle out its neighbors, extending the reach of its exclusive economic zone, maritime territory where it alone has rights to exploit natural resources.

The United States, long unmatched as a naval power, is rightly nervous. Last week, the U.S. Air Force flew B-52 strategic bombers over the South China Sea, and in years past, the U.S. Navy has conducted numerous Freedom of Navigation Operations to contest China’s claims of sovereignty. China’s past response to these perceived incursions has been to ratchet up military tensions by sending yet more destroyers to those waters, one of the world’s most valuable sea lanes. With a belligerent president in Trump and an ambitious competitor in Chinese President Xi Jinping, diplomatic, trade and military tensions seem poised to escalate.

The eagle has locked talons with a challenger and the perilous tangle has begun. But the higher the birds climb, the farther they fall and the greater the consequences of disaster. When bald eagles thrash at one another as they tumble to the ground from dizzying heights, sometimes both fail to pull out of the dive. When that happens, the ramifications are cataclysmic for all.