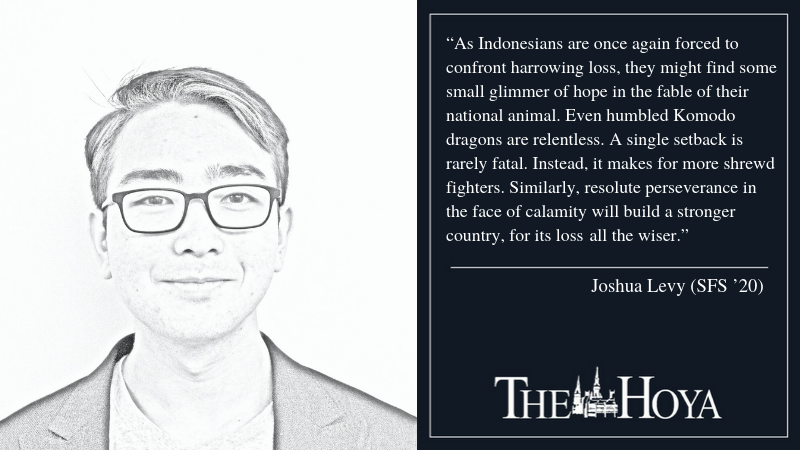 The Komodo dragon is no pushover; the reptile, native to Indonesia, is as fearsome as its name sounds exotic. Komodo dragons wrestle with each other as fiercely as they do tenaciously. They are enormously strong and can inflict disastrous wounds on each other. But the losers in such bouts are resilient. Even in the face of catastrophic disaster and defeat, persistent Komodo dragons always return, looking for another challenge.

Indonesia shares some similarities with the Komodo dragon, its national animal. On Sept. 28, the Indonesian island of Sulawesi was struck by a magnitude 7.5 earthquake. With enough seismic force to make soil behave like a fluid, roads, building foundations and entire neighborhoods were swallowed by the earth in moments. Minutes later, a tsunami swept ashore, swamping the streets of Palu, the capital of the Central Sulawesi province.

The official death toll now stands above 2,000 and is expected to climb to as high as 4,000, while search and rescue efforts continue. Some 80,000 people have lost their homes.

Despite the curses of its geography, Indonesia will carry on. The extraordinary destruction of property provides some morbid opportunities to rebuild infrastructure more resilient than before and to reinforce best practices. This truth was borne out over a decade ago, after a 2004 Indian Ocean earthquake and tsunami took the lives of more than 170,000 Indonesians.

That disaster prompted a massive global response. In addition to the enormous humanitarian effort — the international community raised more than $14 billion in aid — a consortium of governments built and completed a tsunami early warning system for Indian Ocean countries in 2006.

But this network of early warning systems failed repeatedly and catastrophically last month in Indonesia. The seismographic sensors designed to detect earthquakes accurately recorded the tremor, but text message alerts couldn’t be sent to residents, as the earthquake had already toppled cellphone towers. All 22 of the buoys at sea intended to detect approaching tsunamis were not operational when the disaster struck: None have worked since 2012 because of vandalism and lack of maintenance. Palu officials admit that the local tidal monitoring station wasn’t working either.

The government’s critics are furious. Though vulnerable cities like Palu have drawn up disaster response plans since the 2004 tsunami, commentators worry that such contingency plans are worth little without necessary funding and equipment for local governments. Even the BNBP, Indonesia’s disaster management bureau, complains of being underfunded. Consequently, when disaster strikes, regional authorities are often left waiting until the military arrives.

Authorities can learn from the most recent disaster. It is unacceptable that government neglect rendered early warning systems nonoperational. Potentially lifesaving information infrastructure must be maintained after it is built, even if routine upkeep is worth little political pork.

The foundations of the early warning systems can also be solidified. For example, soil liquification, which took down cell towers, can be combatted by reinforcing foundations with a construction technique called jet grouting.

Jet grouting to shore up building foundations, for example, is almost impossible to do for existing structures. Now is the time for reconstruction that will pay dividends in the future. Just as in 2004, when Indian Ocean countries learned what services can curb the worst of natural disasters, the Indonesian government will hopefully, in this moment of tragedy, learn the importance of infrastructure maintenance as well.

Other initiatives will also help. Better funding of local government, particularly for earthquake education, will go a long way. Disaster experts emphasize that, even in the absence of text message alerts, the earthquake itself is a warning of a potential tidal wave. These same experts suggest that educating Indonesians on this information could save countless lives. Indonesia spends far less money on earthquake education than Japan or New Zealand — both similarly earthquake-prone, albeit richer countries — but emergency drills are relatively inexpensive and can save lives in numerous disasters to come. With little more than fiscal expenditure, countless lives may be saved in future tragedies.

In the face of ruination, humanity endures. This instance will be no different. As Indonesians are once again forced to confront harrowing loss, they might find some small glimmer of hope in the fable of their national animal.

Even humbled Komodo dragons are relentless. A single setback is rarely fatal. Instead, it makes for more shrewd fighters. Similarly, resolute perseverance in the face of calamity will build a stronger country, for its loss all the wiser.