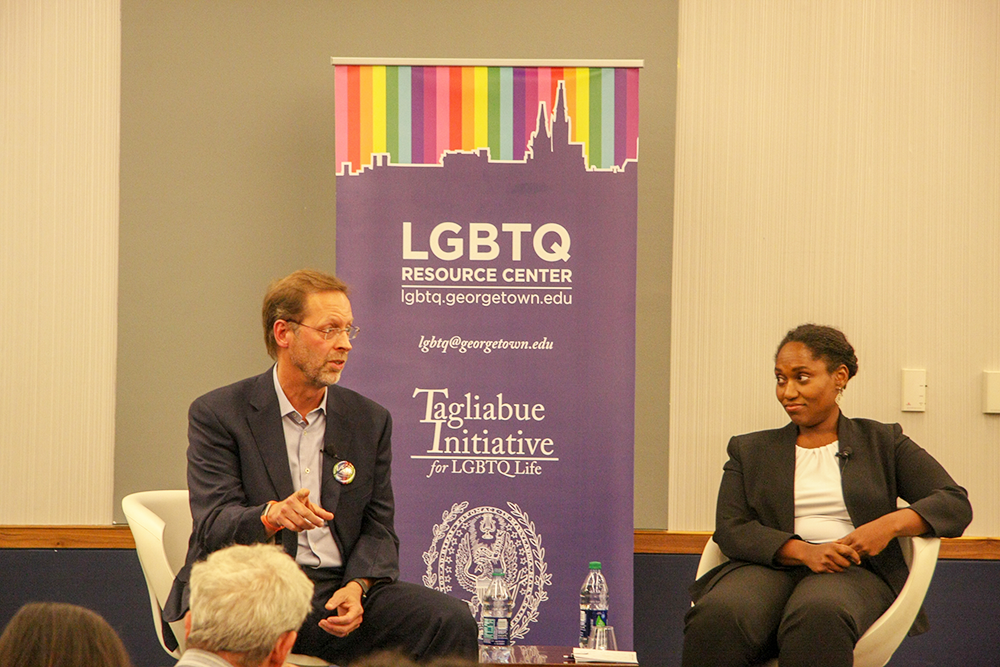 Student activists brought about the establishment of the LGBTQ Resource Center and their energy helped sustain the center, Dan Porterfield (COL ’83), Georgetown University’s former senior vice president of development, said Monday at a discussion in honor of the 10th anniversary of Georgetown’s LGBTQ Center.

The event, cohosted by the LGBTQ Center and the Tagliabue Initiative for LGBTQ Life, featured a conversation between Porterfield and Provost’s distinguished Professor of History and African-American Studies Marcia Chatelain.

Porterfield, president and CEO of the Aspen Institute, an education and policy research organization, helped establish the LGBTQ Center when he served as Georgetown’s senior vice president of development in 2008. The center formed after student working groups that formed as part of the Out for Change Campaign, a campaign in response to a hate crime targeting gay students on campus in 2007, recognized the need for a center to support LGBTQ students. During that year, Porterfield also led a campaign to share the stories of LGBTQ students on the front page of Georgetown Magazine, a university publication highlighting stories about students, faculty and alumni.

The LGBTQ Center officially opened its doors in August 2008 under the leadership of Sivagama Subbaraman, the first and current director of the center. Today, the center includes resources for LGBTQ students, including the Tagliabue Initiative for LGBTQ Life. The Tagliabue Initiative, funded from a gift from Chandler and Paul Tagliabue (COL ’62), who also served as chairman of the university’s board of directors from 2008 to 2015, includes Journeys, an annual LGBTQ center retreat, a discussion based initiative to explore queer identities and a series of workshops to provide LGBTQ students with a space to reflect on and engage with their identities.

Student activism drove the movement that established the LGBTQ Center and has sustained it to this day, Porterfield said.

Student involvement in movements like the one to establish the LGBTQ Center helps cultivate a culture and a community that students need, Porterfield said.

“We have to challenge students to be partners in creating the community that they want,” Porterfield said. “They are people who shape the traditions and the culture of the school.”

While student activism was the driving force behind the creation of the LGBTQ Center, only with university support could the center gain the traction and necessary funding to develop into its current form, according to Porterfield. University President John J. DeGioia’s endorsement of the LGBTQ Center in 2007 jumpstarted the process to establish the center, he said.

“What [President DeGioia] was able to do was frame the work in a way that was coherent with the core values of this institution,” Porterfield said.

Student activists need to work with the school administration if they want to create lasting change, according to Porterfield.

DeGioia introduced the Monday event and praised the work of the LGBTQ Center in expanding during its 10 years on campus.

“A decade ago we took one step,” DeGioia said in his opening remarks. “This center is something. This community that the Center has sustained is something. Because of all of you, it is something wonderful.”

Getting students to speak up about their experiences helped cultivate a more welcoming community at Georgetown for LGTBQ students, Porterfield said, discussing the 2008 Georgetown Magazine issue that shared the stories of LGBTQ students.

“Real people talked about how it hurt to be not able to express their identity, to share their whole selves,” he said. “Storytelling is a part of how an institution knows itself, and if we can get ourselves to point where we’re listening to each other, sharing stories human-to-human, some of those seemingly hard positions become a little more flexible.”

Student activism also drives the growth of Georgetown’s community, Angela Maske (NHS ’19), who spoke at the event and is the president of H*yas for Choice, said.

“Change is embedded in this institution, in all institutions,” Maske said. “In order to realize our vision of a truly justice-oriented Georgetown, we must embrace this change with open arms.”