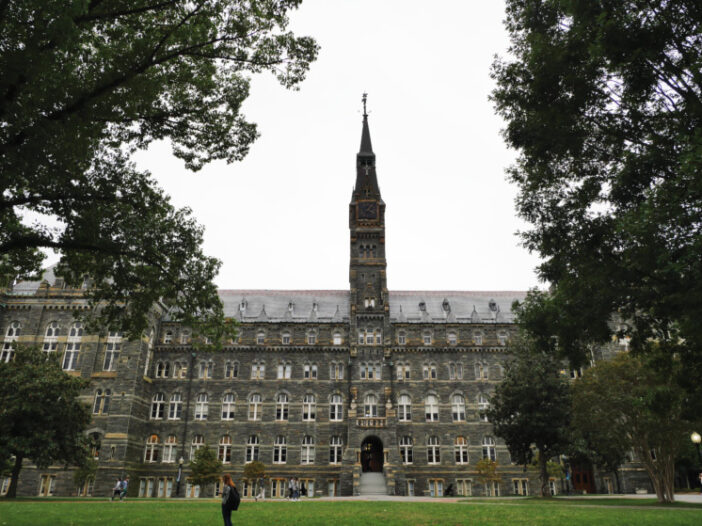 Postsecondary education can have a crucial role in suppressing authoritarian tendencies, particularly in the United States, according to a report published by a nonprofit research and policy institute at Georgetown University.

The report, published by the Georgetown University Center on Education and the Workforce warned that the current global crisis, exacerbated by the COVID-19 pandemic, mirrors similar historical contexts that gave rise to authoritarian regimes. In particular, the report noted growing political polarization in the United States has already intensified authoritarian attitudes and practices, including the use of mine-resistant vehicles and armored cars by police departments.

“Across the country, military and police vehicles patrolled the streets, sometimes using force against peaceful protesters calling for long-denied racial justice,” the report read. “With the presidential primaries complicated by the presence of COVID-19, concerns about potential voter suppression circulated. Shuttered educational institutions and businesses heightened the sense of uncertainty. Propaganda and traditional media competed fiercely to win credibility with a skeptical public.”

The McCourt School of Public Policy professors at CEW Anthony P. Carnevale, Nicole Smith, Artem Gulish and Kathryn Peltier Campbell, as well as Lenka Dražanová of the European University Institute’s Migration Policy Centre, authored the report. CEW, a research policy center formed by Carnevale in 2008, studies the interaction between education and the workforce.

Smith, chief economist at the CEW, said the use of authoritarianism in everyday language misses the full scope of what really constitutes an authoritarian state of affairs.

The researchers operated under a definition of authoritarianism used by political scientist Karen Stenner, an influential definition in contemporary authoritarian research. Stenner considers authoritarianism to be a worldview wherein people prefer “authority and uniformity” before “autonomy and diversity,” according to the report.

People who seek order in response to perceived threats to their way of life tend to favor authoritarianism, even in a democratic society like the United States, according to Smith.

Out of 51 countries studied, the report found that the U.S. population is the 16th-least authoritarian, indicating “moderate” authoritarian inclinations, roughly on par with Chile and Uruguay. The highest authoritarian tendencies were exhibited in India, Kyrgyzstan and South Africa, while the lowest levels were found in Germany, New Zealand and Sweden.

Against a volatile global context, the report identified education as a potential inhibitor for growing authoritarianism. It found that people with a bachelor’s degree or higher are seven times less likely to exhibit authoritarian preferences than people with a high school diploma.

Education weakens authoritarian tendencies in part because it offers income and class benefits, which can decrease perceptions of threat, according to Smith.

“More education also affords you the ability to have a higher standard of living and to be upper income and upper class, and all these things are interrelated or commingled with education to lead to weaker authoritarian attitudes,” Smith said.

Mark Lance, professor of philosophy and co-director of the Program on Justice and Peace at Georgetown, agreed education has an extremely important influence on authoritarian attitudes. However, he noted that the report’s overall finding on education can be misleading because he believes education’s impact can pull in both directions, based on his experiences as a peace educator.

“Education, if it’s successful, breeds precisely the kinds of habits and skills that make a populace resist authoritarianism,” Lance said in an interview with The Hoya. “On the other hand, if education is structured around following a bunch of arbitrary rules, and believing what the person in the front of the room tells you, and writing it down and repeating it back on the test, then education reinforces authoritarianism.”

Lance said these two kinds of education are in perpetual conflict with one another. He said  liberatory education, which is centered on raising consciousness and engagement, runs through the justice and peace studies department, as its mission is to train students to work for social justice and, consequently, against authoritarianism. However, he believes authoritarian forms of education also exist at Georgetown.

“It’s variable here, like anywhere,” he said. “I teach at probably the extreme end, but I think there’s also a fair bit of training at Georgetown that is trying to make people into competent upper managers of what is essentially an authoritarian system.”

The report determined that the United States had the strongest positive relationship between college education and lower authoritarian tendencies. But because the surveys administered in the study did not incorporate details about the U.S. education system in particular, one can only speculate as to the cause, according to Smith.

One hypothesis the report suggested is the prevalence of the U.S. liberal arts system, which requires students to develop a more open-minded worldview by thinking critically across multiple disciplines.

“Liberal arts majors (excluding the sciences) are less inclined toward authoritarianism than those who major in either business-related fields or STEM disciplines,” the report found. “The prevalence of at least some exposure to the liberal arts among US students may help explain why an American higher education in particular is associated with a weak preference for authoritarianism.”

Although the report identified a strong positive relationship between higher education and a disinclination to authoritarianism, it still urged colleges to work even harder against authoritarian attitudes.

“In the United States, college can and should instill the skills and abilities people need to participate in and protect American democracy,” the report concluded, “including the capacity to resist the trappings of authoritarianism in its many forms.”