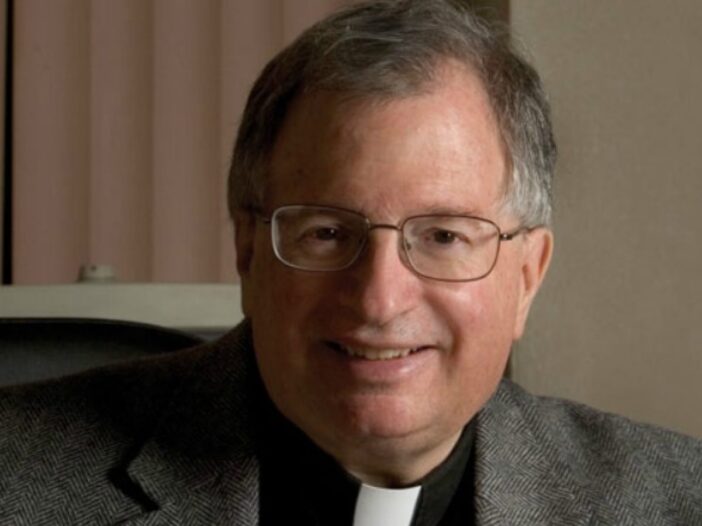 Georgetown University’s Berkley Center for Religion, Peace and World Affairs hosted a conference to celebrate the legacy of Rev. Drew Christiansen, a professor of ethics and global human development who died in April 2022.

The Nov. 14-15 event focused on Christiansen’s legacy of exploring the intersection of Catholic social teaching and the subjects of peacebuilding, just war, nuclear disarmament and environmental justice. Keynote speaker and Berkley Center fellow David Hollenbach discussed topics that aligned with Christiansen’s passions, including interreligious peacebuilding in the Middle East and ongoing challenges in nuclear arms control, alongside over 20 other speakers from universities across the United States.

Michael Kessler, the executive director of the Berkley Center, said the conference aimed to honor both Christiansen’s professional accomplishments and his personal character.

“When our colleague Drew Christiansen passed away, we lost not only a beloved friend, but a scholar whose capacious mind, gentle spirit, and sheer range of expertise are demonstrated by the range of topics we will take up in the next two days,” Kessler wrote to The Hoya.

The first day of the conference focused on nuclear weapons, and speakers discussed the need for Catholic institutions to focus on divestment from indiscriminate weapons, or weapons whose effect cannot be contained to a specific military target. The following day centered on the Catholic Church’s role in facilitating environmental justice.

Hollenbach knew Christiansen after they attended Woodstock College and Yale University together, and said Christiansen’s mission to protect marginalized communities, including Christians in the Middle East, motivated his work.

Christiansen’s ability to connect various interdisciplinary perspectives toward a common goal made his work noteworthy, according to Kessler.

“Drew’s legacy was really the many friendships and work relationships he held across a vast number of institutions and networks,” Kessler said. “He brought together people from different sectors — such as nuclear threat issues, environmental justice, and peacemaking — into a common mission.”

Christiansen’s legacy is preserved by the scholars who participated in these discussions and furthered the mission of his academic work, according to Catholic University professor Maryann Cusimano Love. Cusimano Love first introduced the idea for the event alongside University of Notre Dame professor Gerard Powers.

“We’ve talked about his contributions in the past, we’ve talked about their implications for the present on all of these policy issues,” Cusimano Love said at the event. “The point of this conference is how to take his legacy forward, what this legacy means going forward to the future.”

“His concept of the normal imagination was that we had to imagine communities that include our adversaries,” Cusimano Love said. “Whether they are adversaries in war and peace or adversaries on different sides of the aisle or different political perspectives who have different ideas, we have to encounter them, engage them in dialogue.”

Forming these relationships, especially with ideological opponents, helps create innovative solutions for social problems and new ways for society to progress, according to Cusimano Love.

“Out of these relationships of love and friendship would spring new and creative ideas for paths forward,” Cusimano Love said. “There wasn’t one path to peace. He would have had a short legacy if he thought there was just one path.”

Kessler said the Berkley Center intends to uphold the essence of Christiansen’s philosophy in its future projects.

“He worked across religious, national, and ethnic boundaries in a spirit of friendship and collaboration,” Kessler said. “All of our work at the center will endeavor to continue this spirit.”