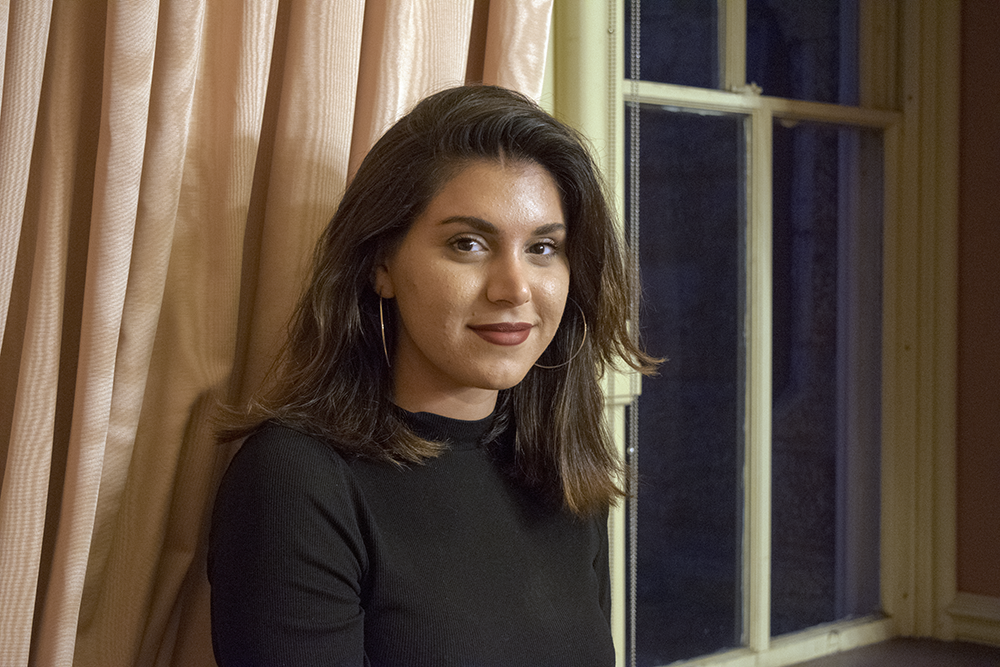 Jetlagged from a 12-hour flight and lugging two 50-pound suitcases behind her, Rachelle Bonja (SFS ’20) had finally made it to the United States.

Growing up in Aleppo, Syria, Bonja, arrived alone in Washington, D.C. with no phone, no credit card and no idea how to get to Georgetown University to begin her freshman year in the summer of 2016.

“My parents can’t come to the U.S.,” Bonja said. “They are not allowed in, because I’m Syrian. I had literally no one when I got here, and I had to take a cab to Georgetown. I remember the feeling of seeing people with their parents and feeling so desperate because I wanted to know how to do things.”

For many international students, this sense of discomfort and anxiety is not foreign.

Georgetown markets itself as attracting students “from around the world,” with 3,048 international students from 125 countries enrolled in both university programs, 458 of whom are undergraduates, according to the Office of Global Services.

The Cultural Gap
While many international students come to Georgetown without any prior experience in the United States, some students attend programs that introduce them to life in a U.S. college setting, including summer courses at U.S. universities like Georgetown. Those students often feel more prepared to assimilate into Georgetown’s environment.

Having a good command of English can also break down certain cultural barriers, according to Austrian native Roxana Helena Demeter (COL ’21).

“I’ve obviously had an easier time because I was fully fluent in English and relatively ‘assimilated’ to American culture by the time I came here,” Demeter said.

Still, Demeter cautioned against the pressure to assimilate for international students.

Assimilation, Demeter warned, can result in the loss of one identity to gain another, fracturing the two instead of creating a balance of coexistence.

“Assimilation is just an ignorant idea,” Demeter said. “Why would you want students to assimilate to American culture as opposed to them bringing their own cultures and them feeling wholly comfortable in continuing to practice their culture?

That’s how you get a vibrant community where everyone feels welcome.”

For others, the culture shock of moving to the United States eroded with time, according to Brazilian student Gabriel Donato Gonçalves (COL ’19).

“I feel like I was only able to assimilate with American culture after I struggled with it,” Donato Gonçalves said. “I don’t want to change where I am today, because even though it’s been very difficult at times, I think these times have taught me a lot.”

Filling the Gap
Given the difficult transition international students can face, Georgetown has sought to create a resource at their disposal to ease certain burdens.

Established in 1983 and rebranded in 2014 to distinguish itself from study abroad programming, the Office of Global Services is tasked with helping international students who are sponsored by the university. To obtain a F-1 or J-1 visa to study in the United States, students’ applications are contingent on their acceptance to an accredited university; for prospective Georgetown students, obtaining the proper paperwork can take weeks and weeks of bureaucracy.

In the latter half of the day, the orientation focuses on cultural assimilation to both the United States and Georgetown, I-NSO orientation leader Seo Young Lee (COL ’21) said.

OGS Falling Short
While OGS strives to be a resource for “the entire international student body,” the center only serves a subset of foreign students — those with F-1 and J-1 immigration statuses, but not those who hold dual citizenship with the United States. As such, OGS does not interact with all “self-identifying” international students, according to OGS International Student Advisor and Orientation Director Stacy Williams.

“OGS staff and resources serve only two student groups — those in F-1 and J-1 immigration status — at the undergraduate and graduate student level, so our perspective is limited to experiences of those students even though there are many, many students studying in different statuses or that hold non-U.S. citizenship at Georgetown that may self-identify as an international student,” Williams wrote in an email to The Hoya.

Dual nationals are not counted as international students in official statistics, according to OGS.

Despite her need for support, Bonja never received an offer of OGS resources since her U.S. passport prevents her from appearing on the roster of international students.

Many international students seek a more personalized support system than OGS can offer, rather than generic answers copied and pasted from a handbook, according to Australian native Calvin Dass (MSB ’20).

“The trouble with OGS is that I think they mean very well, but it’s very difficult to provide a customized experience because of the all of the differences and levels of Americanization,” Dass said.

“We hoped it would give international students some advice and, most importantly, peace of mind going into this whole process of acclimating to college,” Lee wrote.

Beyond a personalized experience, international students have called for a fuller sense of investment in their future through increased job support. Extensive regulation of employment for students with visas complicates their job search. Students can work on campus for up to 20 hours per week, for example. For internships, however, students on certain visas must follow specific restrictions; they must find a position related to their major and can work only a limited time over their time in school.

Dass is only allowed to work 20 hours per week in a non-work-study job on campus; only certain internships pertaining to his major — most of them unpaid — will hire him.

“OGS offers no [job] support, to my knowledge, as far as finding jobs,” Dass said. “It’s more about what to do once you’ve got the job from the legal standpoint. You can tell that they put the effort in, it’s just that I really wish they had specialized knowledge.”

“OGS closely collaborates with them [Cawley Career Center] to encourage attendance and provides information during the sessions about the student immigration regulations that govern internships, employment, and training,” Rubin wrote.

Georgetown as a Global Home
Over the past year, steps have been taken to widen the reach of OGS. The International Focus Committee, a group composed of representatives from campus offices that hosts focus groups to gather input on international students’ experiences, was formed last December in hopes of fostering collaboration among faculty and staff who play a role in the international student experience.

Further support around issues pertaining to financials, cultural assimilation and paperwork could greatly benefit the international student population on campus, according to Dass.

“OGS should make Georgetown feel like a home away from home,” Dass said. “I don’t mean emotionally, because they do a good job of that. I am talking about understanding that international students don’t necessarily have everything that domestic students have and providing support for those particular needs.”

In particular, Dass recommended tailored support for international students who need a permanent address for summer applications, like those for internships.

The transition to a new country with no prior context, both as a freshman and a foreigner, can be extremely challenging. Bonja likened the experience to hiking without adequate supplies.

“Being dragged around and being uncomfortable all the time, this is how I would best describe my life in the U.S.,” Bonja said. “It’s unrelated to being happy — it’s a physical state, not a mental state. It’s like when you go hiking, and your shoes are wet, and the bed isn’t comfortable, but you’re still happy because you’re hiking. I’m struggling through, and my shoes are always wet, but I’m really happy because I chose to be here.”

“I am a strong believer in the butterfly effect. If I change anything — any door I walk in or any step I take, I wouldn’t be where I am today,” Donato Gonçalves said. “Six months, two years from now, you’ll be able to realize how much these times teach you. There is a place for everyone at Georgetown.”

Correction: This article has been updated to correct the spelling of Lee’s last name.