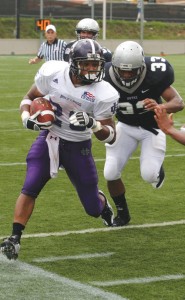 Nick Parrish truly fits the bill as a Georgetown student-athlete.

The sophomore linebacker headlines a defense that has forced 10 turnovers in four games and will be looking for more when the 1-3 Hoyas return to the gridiron for homecoming against Pennsylvania tomorrow.

A 6-foot-1, 210-pound Texan, Parrish has been a relentless force on his side of the ball this season, earning Patriot League defensive player of the week honors two weeks ago for his performance against Holy Cross in which he returned two interceptions for touchdowns and tallied 11 tackles. Through 15 career games at Georgetown, he has brought down opposing ball-carriers 112 times. That’s some serious production.

The Hoya defense has done a particularly good job against the run this season – although it has yielded over 150 yards per game on the ground, the unit has limited ball-carriers to 3.5 yards per carry. It is no surprise that Parrish has been right in the middle of that run-stuffing effort.

He does the job in the classroom, too. As an honor student on the Hilltop, his appreciation of the value of a Georgetown education is evident.

“I chose to come to Georgetown because of the mix of academics and football,” Parrish says. “I knew I’d be able to touch the field right away, and I loved the environment here when I came up for my visit.”

His attitude both on and off the field has earned him the respect of his teammates and his coaches. Parrish’s progression as an excellent football player is not happening accidentally.

“Nick has been terrific for us,” Head Coach Kevin Kelly says. “He works extremely hard and does all the little things. He’s making a lot of plays.”

That work ethic is basically all Georgetown’s leading tackler has ever known.

“It’s how I was raised, going all the way back to pee-wee ball,” Parrish says.

He grew up in Irving, Texas, and attended Jesuit College Prep in Dallas, where he ran track in addition to playing football. During his senior year, Parrish was the team captain and played well enough to be named the squad’s defensive MVP. He also distinguished himself as a first team all-district linebacker – an honor that carries a lot of weight in a state that takes its high school football as seriously as Texas does.

From his hard-working roots, Parrish has taken his act to the Hilltop and has been a standout through his first year and a half as a starting linebacker. As a sophomore, he represents a major aspect of the future of Georgetown football – 60 percent of the current roster is made up of freshmen and sophomores.

With a stable of young, skilled players on offense, Parrish has become the centerpiece of the youth movement on the other side of the ball. Georgetown’s No. 33 believes all of these underclassmen will pay dividends not only in the next few years but also for the remainder of the season.

“The future is looking up,” he says. “This class will continue to mature and get better.”

If every young Hoya follows Parrish’s lead, there is certainly reason to be optimistic.

– It was announced this week that the Georgetown-Colgate game that was cancelled due to the norovirus outbreak will not be replayed. The athletic directors of the seven Patriot League schools voted unanimously to list the game as “unplayed.”

In the event that Georgetown or Colgate ends the year with the same number of conference losses as any other league team, those teams will be tied in the season-ending standings.

– Norovirus is still wreaking havoc on the Hoyas. Four of the 10 players originally diagnosed will not suit up tomorrow.

– UPenn comes to town at 1-2, but its record does not do the team justice.

– Tomorrow’s homecoming game will provide some extra excitement for the Hoyas on the field. They will get a chance to break a three-game losing streak in front of a full house of students, parents and alumni.

“Obviously, preparation is preparation, for any game,” Kelly said. “There will be more people there and these kinds of homecoming games are really why we play and why we coach.”

Kickoff is set for tomorrow at 2 p.m. on the Multi-Sport Facility.