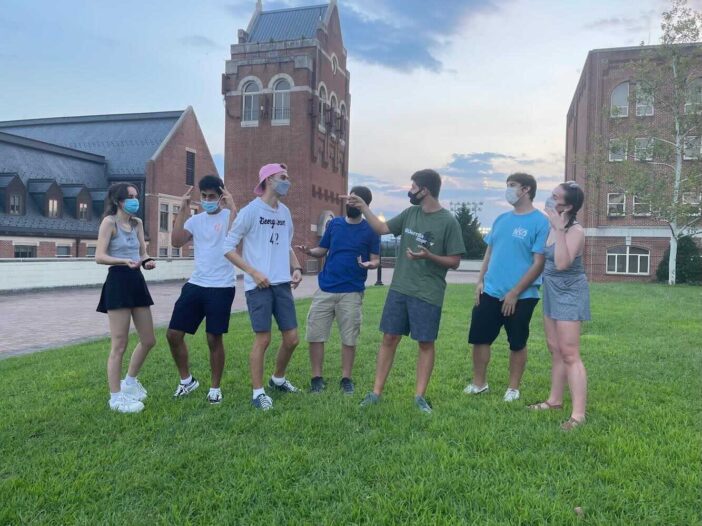 An emotional buildup, a musical introduction, an hour or so of laughter, a hazy afterparty: according to Michelle Renslo (COL ’22), the executive producer of the Georgetown Improv Association (GIA), this is the transcendent experience of performing a comedy show at Georgetown University.

“After the improv show, it’s kind of a haze. You don’t really remember exactly what happened very well. But every single one is an event,” Renslo said in a Zoom interview with The Hoya. “There’s so much buildup: We usually have a band play us on, and we usually will have an afterparty where everyone in the audience will come by. There’s a whole lead-up, and then a whole release after. I just love the ritual of that performance.”

For over a year, comedians at Georgetown were unable to engage in the exciting buildup and satisfying comedown that Renslo describes. They grappled with performing in the confines of Zoom squares, all the while wishing to take the stage in person. In Renslo’s mind, live comedic performance is irreplaceable.

“It’s definitely something that I’ve been missing throughout the pandemic. I think it’s really unlike anything else, any other form of performance that goes on,” she said.

Now, comedy clubs at Georgetown can finally feel that rush again. Whether they find it during practice or in performance like Renslo, these comedians are returning to campus with a renewed appreciation of laughter.

More Than a Zoom Reaction

In a virtual setting, comedy clubs found themselves limited. Acting in front of a computer and performing with glitchy audio made online regular practices difficult.

Patrick Cronin (COL ’23), president of Georgetown Sketch Comedy, said he was frustrated with writing, rehearsing and performing comedy in an entirely virtual world. The unprecedented format introduced a number of problems Sketch Comedy never expected to encounter in a live performance, like virtual laughter and WiFi issues.

“Laughter is a big part of comedy, and whether you let the audience broadcast their laughter in the Zoom, or if you have to silence them, or if there’s some idiot that’s talking and has their mic on, it’s hard to get all those little things down,” Cronin said in an interview with The Hoya. “In the virtual world, what separates good performances from bad ones is technological planning.”

In addition to performances in general, competitions between comedy groups were fraught with technical difficulties over Zoom, much to the distress of performers and club leaders. GIA was invited to competitive Zoom shows over the course of last year, but Renslo was unsatisfied with competing virtually.

“It just wasn’t what we were looking for. I think so much of doing improv is the in-person experience and being able to be in the room and have that dynamic, and it’s so physical, that it really does require you to be in the same space as someone,” Renslo said.

However, the virtual environment did not always kill the crowd for comedy groups. According to Shannon Burke (NHS ’22), the executive producer of GUerrilla Improv, over 100 people logged onto a GUerrilla performance in March, far more than the group was expecting.

“There are a lot of specific things that we couldn’t do because they involve a lot of movement, for one, and then coordinated, like, speaking at the same time,” Burke said in a Zoom interview with The Hoya. “So we definitely missed some of those gains, but we really adapted and tried to find forms that would work well.”

Renslo is focusing first and foremost on having GIA meetings in person again. However, Renslo has found that the COVID-19 pandemic still poses issues even back on campus.

“Right now we’re just getting back into regular practice, and we’re planning to have shows following our normal schedule, which is around once a month,” Renslo said.

On-campus comedy can often be a refuge from campus stressors; however, as lighthearted as it may be, the scene is not entirely free from the pressures associated with Georgetown’s club culture. The application process of auditions and callbacks can be competitive and high pressure for new members. Ultimately, the different comedy groups overlap in membership and interests, although their application and audition processes differ.

GUerrilla Improv was born in 2015 from frustrated students who had auditioned multiple times for GIA but were not accepted to the association. GUerrilla promises no applications, auditions or cuts in hopes of extending comedy to everyone who wants to join. Burke said GUerrilla Improv is modeled around inclusivity.

“We believe that comedy can really be taught to anyone. And regardless of your experience coming into Georgetown, we want to give you an opportunity to participate in comedy, if that’s something that you’re interested in,” Burke said.

Renslo appreciates the diverse forms of comedy each club presents and notices ways in which GIA meshes with the other comedy clubs on campus. She sees the comedy community as a small group of people who share common interests and know each other personally.

“There’s a lot of overlap, just in terms of membership. There are a lot of members who cross over and do other things like Sketch Comedy, and generally the comedy scene is pretty small,” Renslo said.

Renslo said there is little to no competition among the clubs, since they each have a specialized form and medium. She also noted that GIA is hoping to be more inclusive this year by hosting a few open practices.

“We do different styles of improv. Georgetown Improv does long form, and GUerrilla does short form. I know a lot of people in GUerrilla and I’ve known a lot of them since freshman year. So there is that social bond,” Renslo said. “We’re also looking to have open practices this year, which is something that is new. It’s good to create avenues for inclusivity wherever you can.”

Learning From the Laughs

Many comics at Georgetown see humor as a means to provide the greater Georgetown community with the opportunity to escape the school’s unique pressures. Burke strives to create a welcoming, fun environment for those who do not engage with comedy on campus regularly.

“For people not specifically involved in the organization but who maybe come to our shows, I hope that it’s a welcoming environment for them and just kind of de-stresser on a weekend, kind of get away from your work and just laugh for a little bit,” Burke said. “All of our shows are free, and we strive to make comedy as accessible as possible.”

Cronin said life at Georgetown can get intense with stress culture and general seriousness, and campus comedy allows people to break away from stress culture.

“Georgetown’s a fairly stressful environment and people take themselves very seriously here,” Cronin said. “Comedy breaks that up a little bit and forces people to take a little step back and outside of the prevailing culture of seriousness.”

For Cronin, comedy has been a tool for personal growth. Prior to participating in campus comedy, he struggled to contain his own jokes in social situations; now, he has a way to channel his own hilarity.

“I love making people laugh, but I also wasn’t able to interact seriously in situations where I probably should have been acting seriously. If I’m nervous to do something, I’d rather make a joke and have everybody laugh, but I’d say Sketch Comedy has provided me with an outlet for my jokes. I love comedy, but now I know when it’s appropriate,” Cronin said.

Dipping her toe in the Georgetown comedy scene has brought Burke new confidence. She said it’s not just about getting people to laugh, but bonding with her peers.

“I didn’t know that improv was something that I’d be interested in doing, but I decided to give it a try, and now it’s one of the most important things that I do,” Burke said. “It’s really special, and has taught me to be supportive of other people’s needs and wants and appreciative of both the differences that we may have and the things that bring us together.”